Hey gang! We’ll be updating this page as often as possible over the course of SDCC 2014. Check back here for SDCC news updates and follow us on Facebook, Twitter and Instagram for an onslaught of video and photos fresh from the showroom floor! 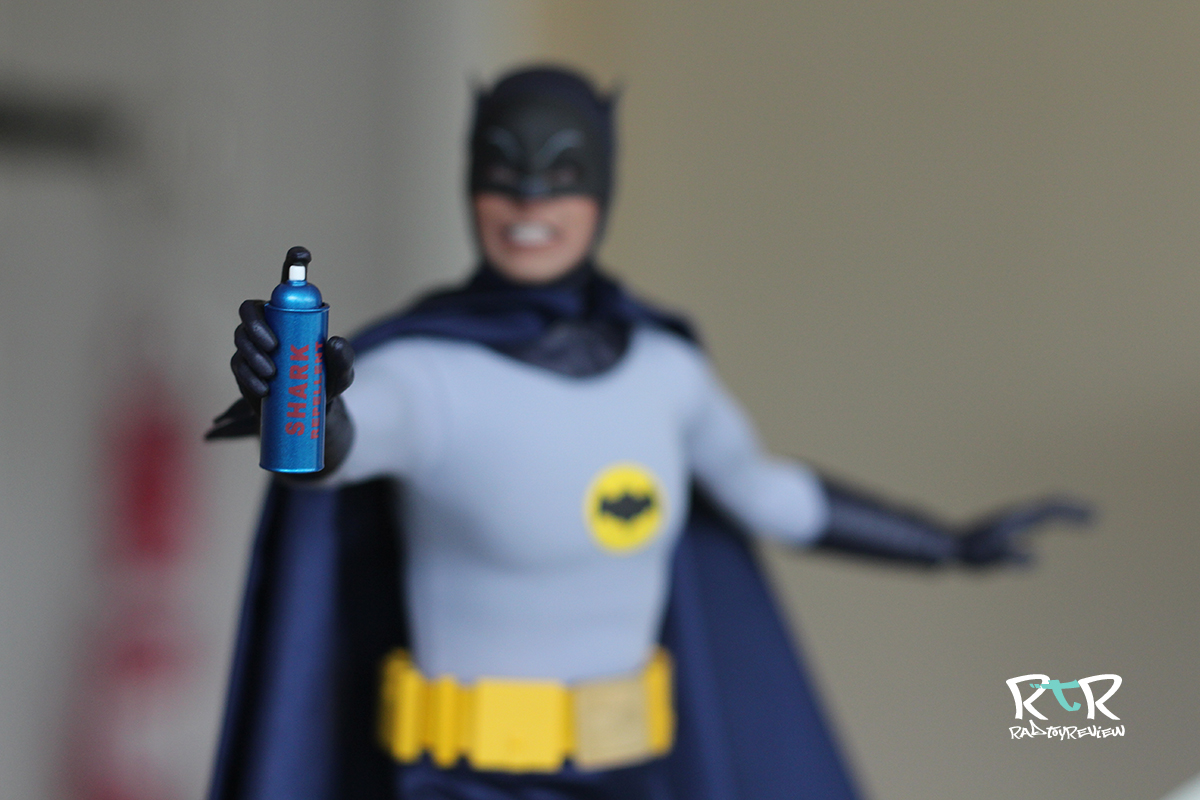 That little dity has been running through my head ever since I got in my Hot Toy’s 1966 Classic Batman. He’s infectious. I can hear and see the “BLAM!”, “KA-POW!” and “BOOSH!” onomatopoeia’s popping up in front of my eyes whenever I glance over at him sitting on my shelf.

The review today is actually a pretty big deal to me as it marks my personal first experience with owning a Hot Toys collectible! I’m not sure why the Hot Toys bug has never bitten me before. They do some incredible looking stuff and I’ve always looked admirably at their offerings on Sideshow Collectibles. Perusing through, I always find myself thinking, “That could be really cool to have.”, but then the $200 price tag would flip the safety back on my purchasing trigger finger and I’d close out the tab. It’s not that I’ve never paid $200+ for a toy before, it’s that the Movie Masterpiece subject matter doesn’t generally appeal enough to me to where I felt compelled to.

Well, all that changed at last years San Diego Comic Con when I saw the prototype Batman, Robin and (jaw-droppingly amazing) Batmobile on display at Sideshow Collectible’s booth. I grew up up on Classic Batman and I believe I have a weird obsession with Adam West that’s encouraged even today by his voiced character on Family Guy, Mayor West. There’s something so fun and appealing to the 1966 version of the character that I knew I had to have him.

Robin is apparently shipping out right now as well, but I never really got into Robin. Even at the young age when I used to watch the show I thought it was really weird for him to run around in green underwear.  Coincidentally, Batman wearing his underwear outside of his cloths seemed completely normal. Hey, I was a kid. END_OF_DOCUMENT_TOKEN_TO_BE_REPLACED

I’ve received more emails asking me when I was going to post my SDCC 2012 Cosplay article than any other singular topic in the past six months. I answered with the claim that it’d be posted over the weekend. This past weekend. Obviously, despite my best efforts, I was unable to get it posted in the time frame I’d planned.

Well here we are, and here it is. Thank for sticking around!

The cosplay at SDCC this year blew me away. Despite seeing pics of it from past years, I wasn’t prepared for how amazing, and occasionally, how purposefully bad you guys are at doing this stuff. I’ve always somewhat admired the talent and downright guts of the individuals who throw themselves into creating and wearing these outfits year after year. Each day at SDCC I was blindsided by the crazy amount of dedication cosplayers have to their craft. Sure, some simply wore their costumes and walked around, occasionally posing for pics. But others would actually take on their role with true purpose, adding voice, poses and actions to their arsenal. I watched a rather impressive ad lib performance by a fantastic looking Joker and Harley Quinn duo. A guy in believable Batman suit was harmlessly walking by them while they were posing for some shots. Without warning they jumped into action, swirling around him and pulling out all the cackling “Joker-ish” mannerisms you could think of. The Batman, sorta went along with it, but obviously wasn’t all about throwing himself into his character as they were. A good sport all the same, and made for a few good photos.

One person who I’d say was the MOST dedicated to wearing a inconvenient costume all day long is actually someone I wasn’t able to get a shot of due to my camera’s battery being dead. She was this thin, 5 ft 6 girl, dressed as some obscure anime character. Her outfit wasn’t all that impressive from what I remember, but she carried with her a giant mace/axe/bullet/weapon that had to be at least 20 feet tall. How much would that suck to lug around all day? Golf clap, young lady, golf clap.

On to the pictures, as I know that’s all you really care about despite my tinkering with this quick prose. Due to the exorbitant amount of photos I’ve at my disposal, I’m not going to try and post them all here. I’m posting several of my favorites (though not all of them) and the rest you can check out over on our Facebook page.

A big thanks to everyone who took the trouble to dress up and stop every five seconds for photos! If you see yourself here, post a comment or drop me an email!

See you next year!

Today’s wallpaper comes from a previous (and generous) Wallpaper of the Week contributor, Grish! I dig his image because not only does it feature one of my favorite figures of 2012 (Jungle Vet) it also manages to make the hooded blood zomb look creepy and even a little menacing.

Lovely stuff! Now I’m off to play with JV.

If you’d like to contribute to Wednesday’s Wallpaper of the Week and have your name go down in history, drop us a line at radtoyreview@gmail.com with your idea and/or image sample.