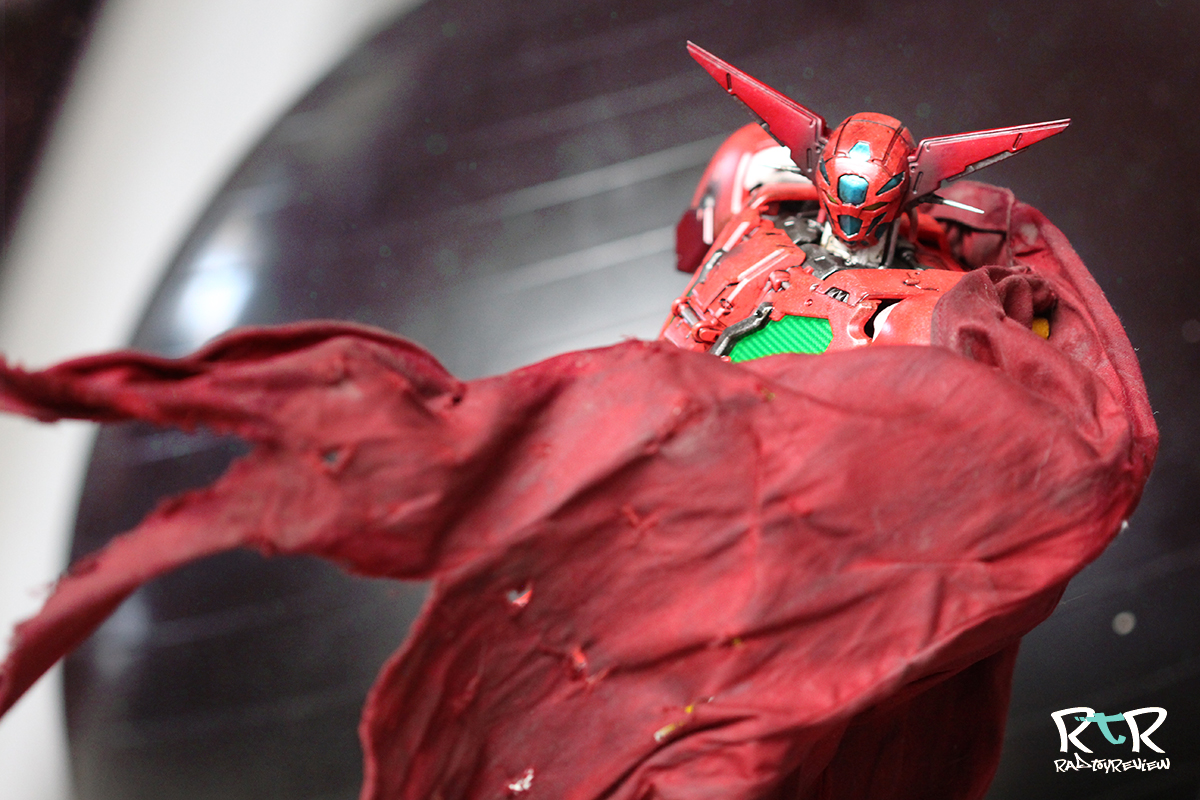 Sometimes I sit here in awe at just how cool looking all this silly stuff is. Ten year old me wouldn’t believe his eyes… his little heart probably wouldn’t be able to take all the awesome, glorious, possibly toxic fume laced, plastic surrounding my desk right now. Ten year old me would also have zero clue as to what the majority of the things in my collection are.

“What’s a ThreeZero?” Ten year old me would ask. ” and why doesn’t that space girl doll have any pants on?”
“You’ll know, ten year old me… one day, you’ll know.”

But ten year old me doesn’t have to know a single darn thing about the big bot that landed on my doorstep today, because like current day me (also known as, “me”) he knows a badass big robot toy when he see’s one.

“Grab those Getter Tomahawks, ten year old self… we got a review to do” 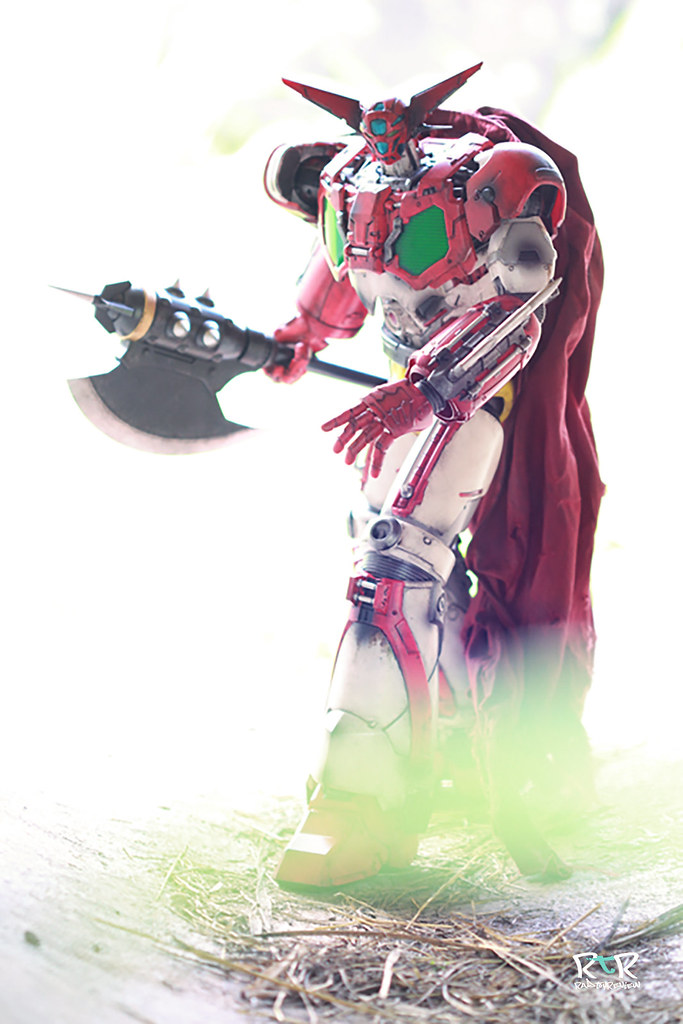 As per the ushe, ThreeZero sent this review sample in a brown, slightly beaten, spacious, peanut filled box. I’m sure the retail one will have slick art and design-y stuff on it, but for now… I’m skipping the box talk and diving in.

Getter Robo stands about 16 inches tall. He’s not the largest robot in my collection (that award would go to 3A’s Mars at a whopping 24″) but he’s still a big fellah. Right in line with the other Threezero japanese bot redux on my shelf, Mazinger Z (review here). 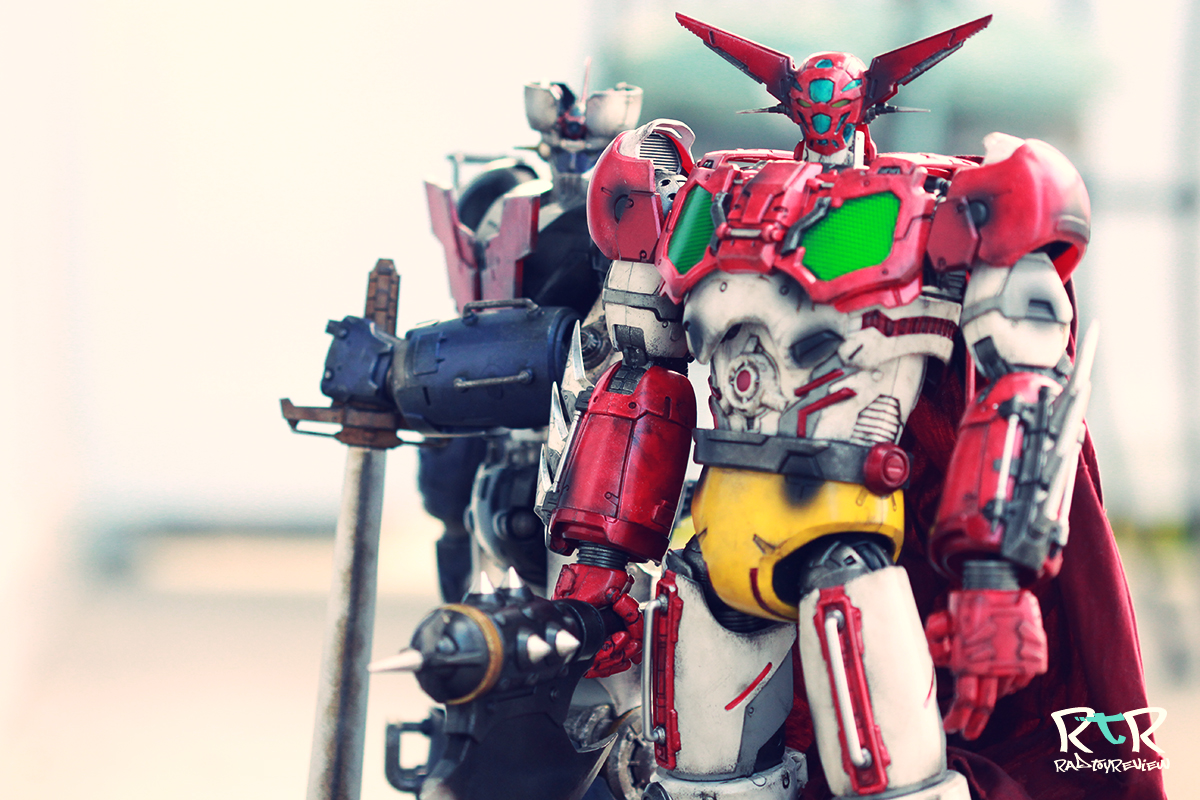 Actually, back up… something that struck me before I even got him out of the box was how incredibly light he is. I’m not even talking about “for his size”. He’s paper light. I thought for a brief moment that Threezero mistakenly sent me an empty box… or possibly the invisible variant of Getter Robo, Getter Ghost. ™
I want to be clear that “light” doesn’t mean “cheaply made”… but still, kinda crazy. 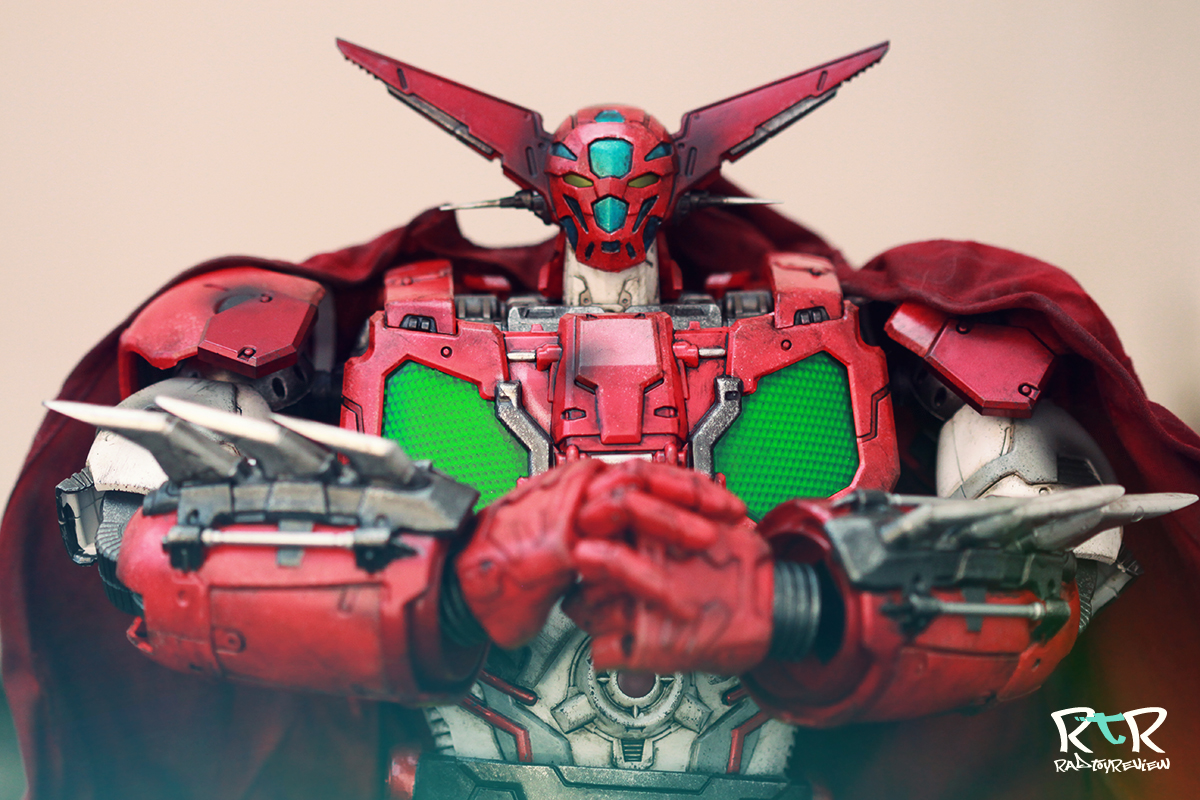 After digging through the copious peanuts and heavily taped bubble wrap, I finally get him set up on the table for a good once over and I’m immediately blown away at how amazing he looks. If this was just a looks alone based article, Getter wins. He’s impressively realized. His design looks to me as if Threezero had been tasked with making a live-action film version of the robo for the silver screen. His design obviously shares some of the key elements of the original 1970’s anime character but it’s completely modernized and looks fantastic. They didn’t add freak’n nostrils or whatever. If you’re familiar at all with Getter Robo, you can definitely see him in there. I think fans of the classic bot will really love the updated design as well. 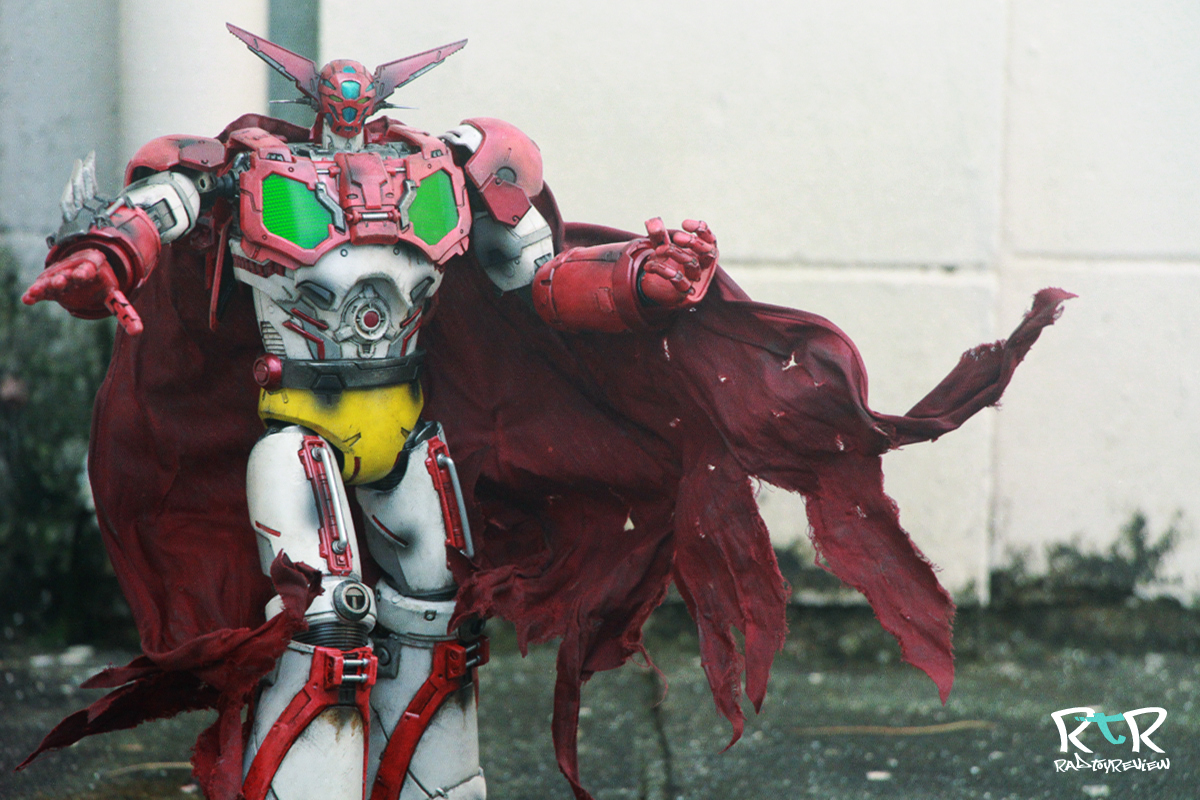 One thing I really like is how brightly painted he is. Sure he’s still dirty and weathered, but that bright red, green,and white (with yellow undies) absolutely pops! Really pulls the room together. It’s a nice change of pace from the muted rusty colors most of my collection seem to share. 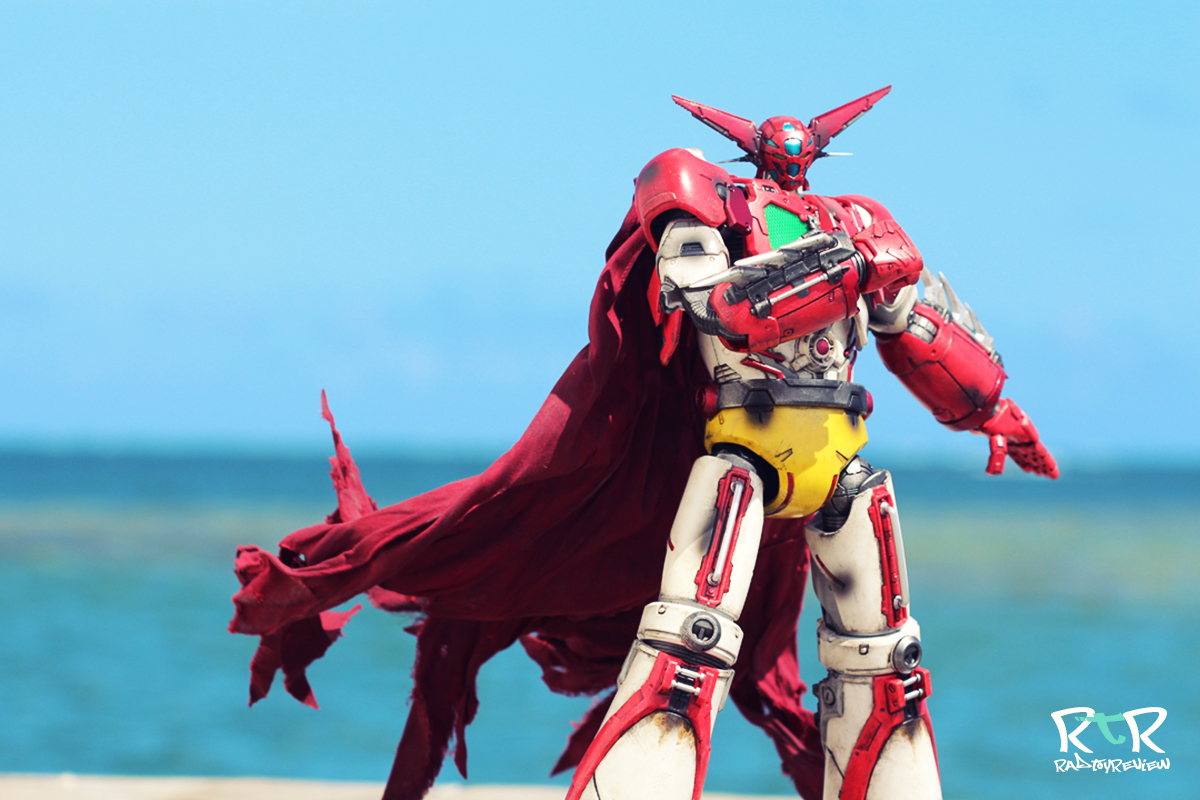 All that sexiness doesn’t mean a whole lot if the dude can’t dance. Mazinger Z is setup in a similar vein. A re-imagining of a beloved classic anime bot. As cool as he is, some of the design elements (his hips, especially) worked against itself and really limited the kinds of poses you could get despite having all sorts of available articulation. 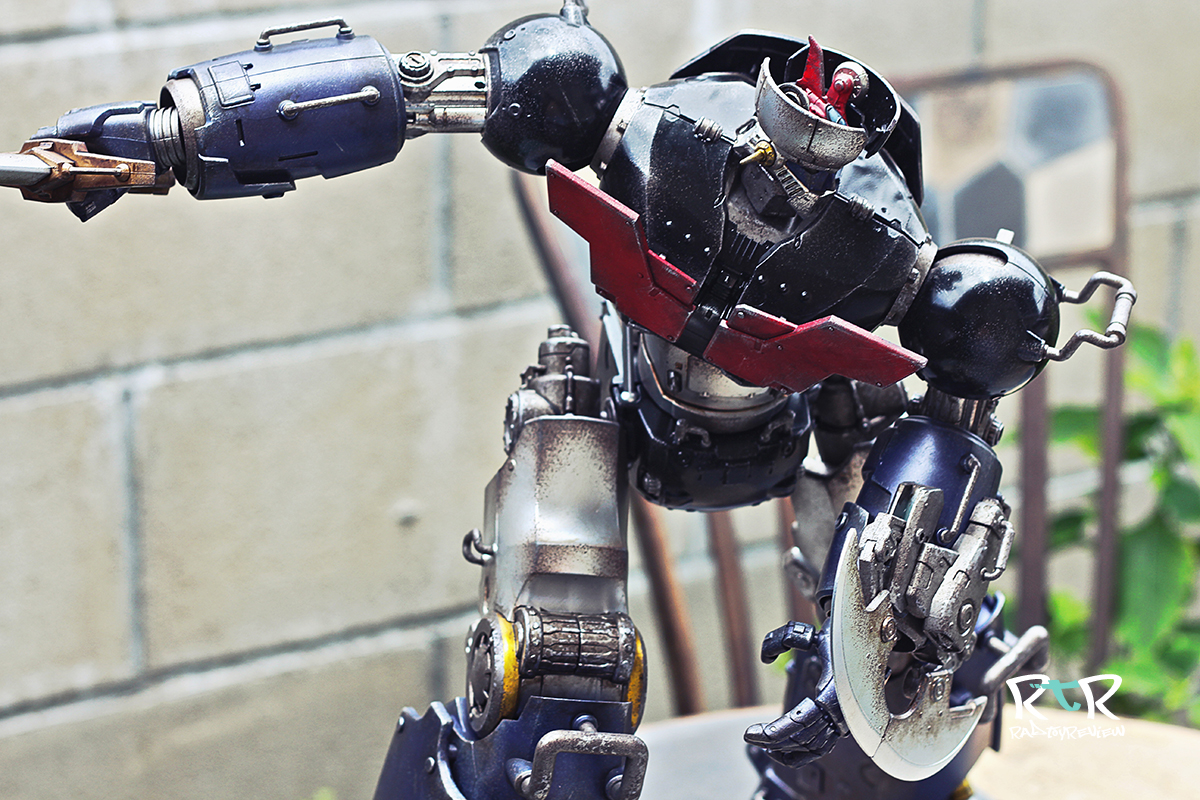 Getter Robo is not Mazinger Z and man, is this guy great to pose. Not only is he loaded with practically unobstructed points of articulation, the majority of them are of the holds-super-great-and-clicks-loudly breed. Ball jointed neck, ball joint shoulders, double hinged elbows(!), articulated fingers, ratcheted knee joints, etc.. it’s all here. 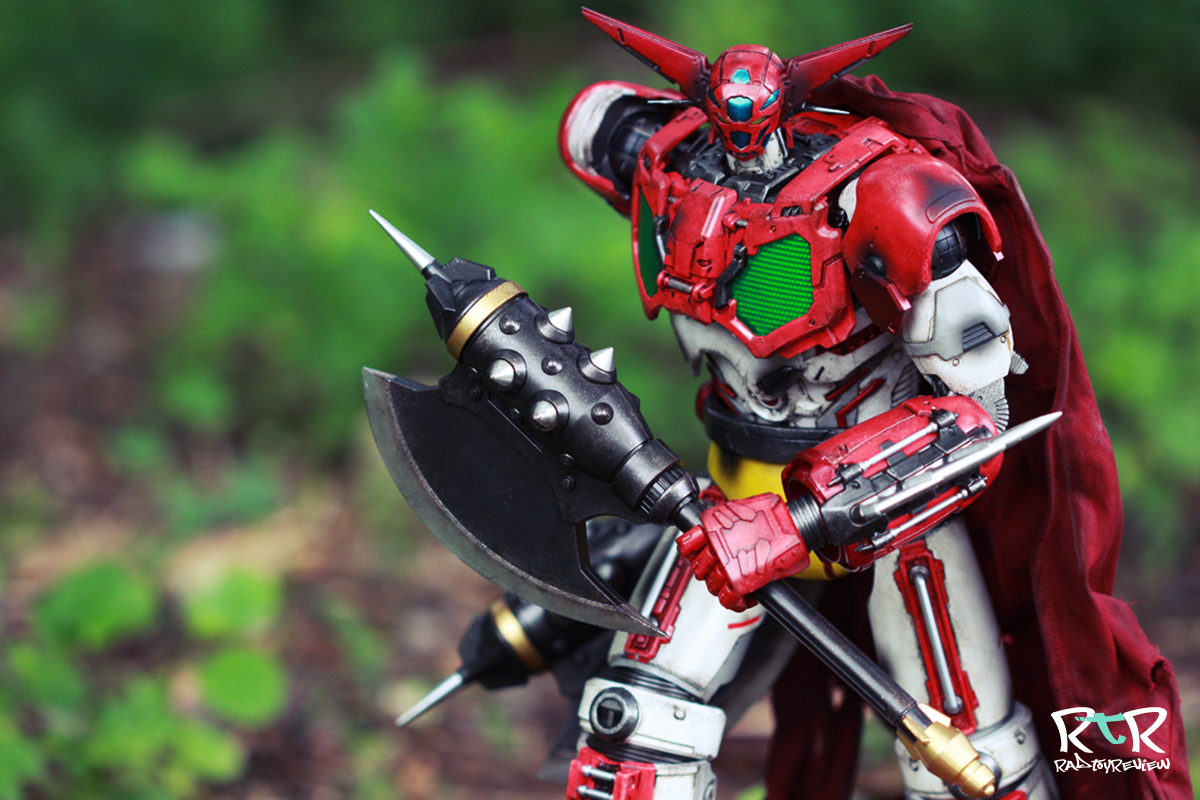 After messing around and posing him up for the photos and video, I really couldn’t think of an area, articulation-wise, I’d change, add to or improve. This may be a first for me. It’s that well done.

Slow clap, Threezero.. you earned it. 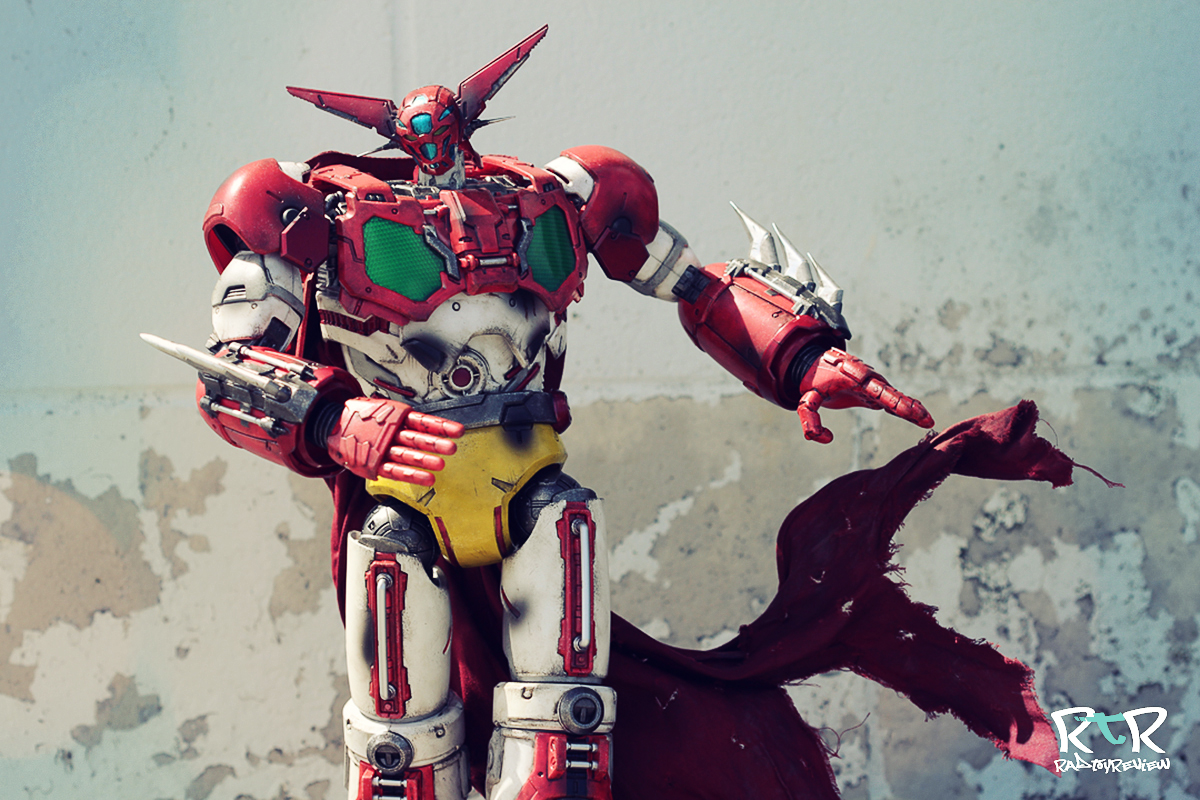 Check out our video below for the full rundown of his articulation.

Accessories! Getter’s got this great looking cape, worn and tattered to match the look of the bot itself. It has some bendable wiring sewn into the edges which allows you to get some pretty neat looks. You can’t work miracles with it, but they’re really good for shaping the overall silhouette and add some drama to however you pose him on your shelf. If you get tired of it, you can easily remove it via two little brass color knobs on his back. Also, be careful if you, like me, happen to be carrying this guy all over the place near areas (street grates, the ocean, etc) where, if something drops, you lose that thing forever. One of those little brass knobs slipped out quite a bit from me messing with the cape. A few times I didn’t catch that it was hanging there until setting up at the next location. 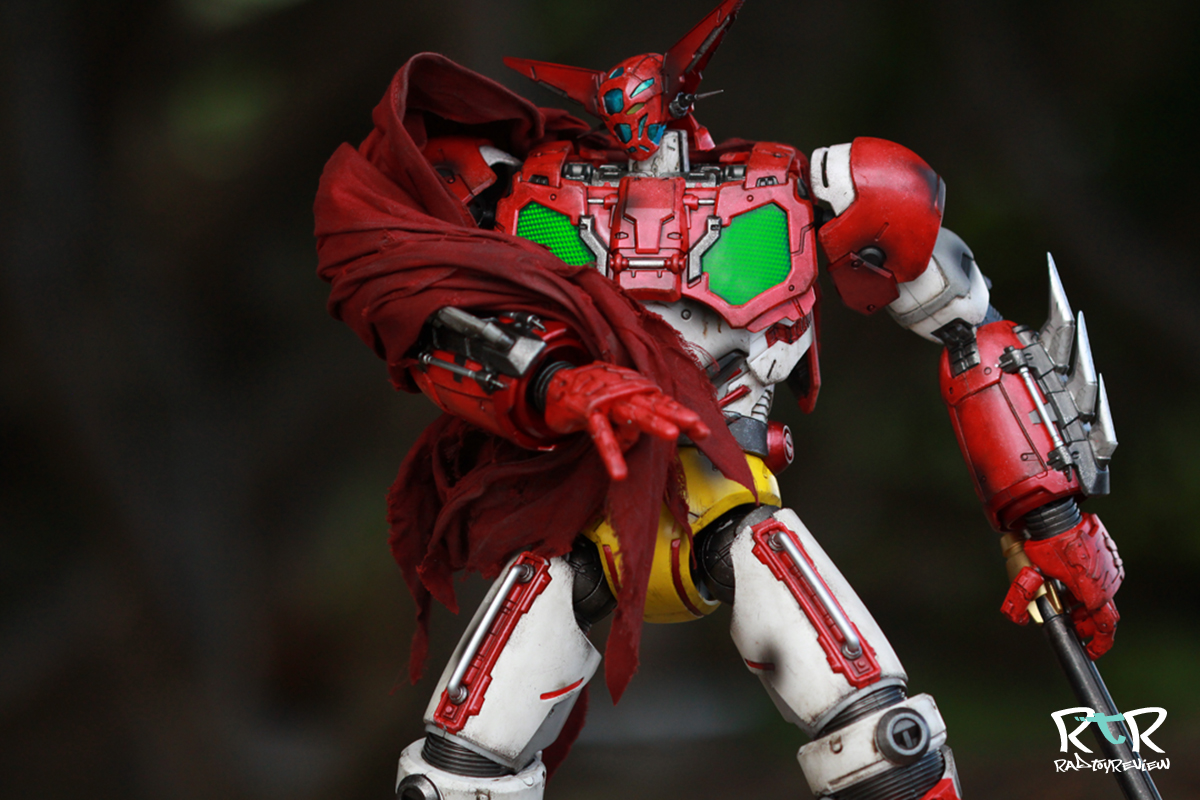 Weapons-wise, this is where we get to check out Getter’s two impressive looking tomahawks. This is also where we hit a little kink in the Getter Robo armor.

The axe heads on the tomahawks are pretty heavy and their grips are almost completely smooth. Without doing science, I’m going to say that the problem is a combination of two things. One, despite Getter’s fingers having some of the tightest joints I think I’ve seen on a bot yet, the weight of the tomahawks, still pull them apart after a few moments. The second problem is that the handles are smooth so there’s really not much grip to them. They basically spin around in his palm, no matter how tight you can get the fingers to close around it. I doubt any level of hair-spraying the joints will change that. What I think might could work and plan to try myself is finding some faux leather or even cut some thin strips of black electrical tape and wrap around the grips to see if that helps the problem.

Obviously, from the pictures you can see I got by OK with what’s there. He is holding his tomahawks in most of them. Just know that it required a bunch of fidgeting by your’s truly. Other than maybe having it supported over his shoulder, I doubt I’ll leave him posed on my shelf with one in his hand. 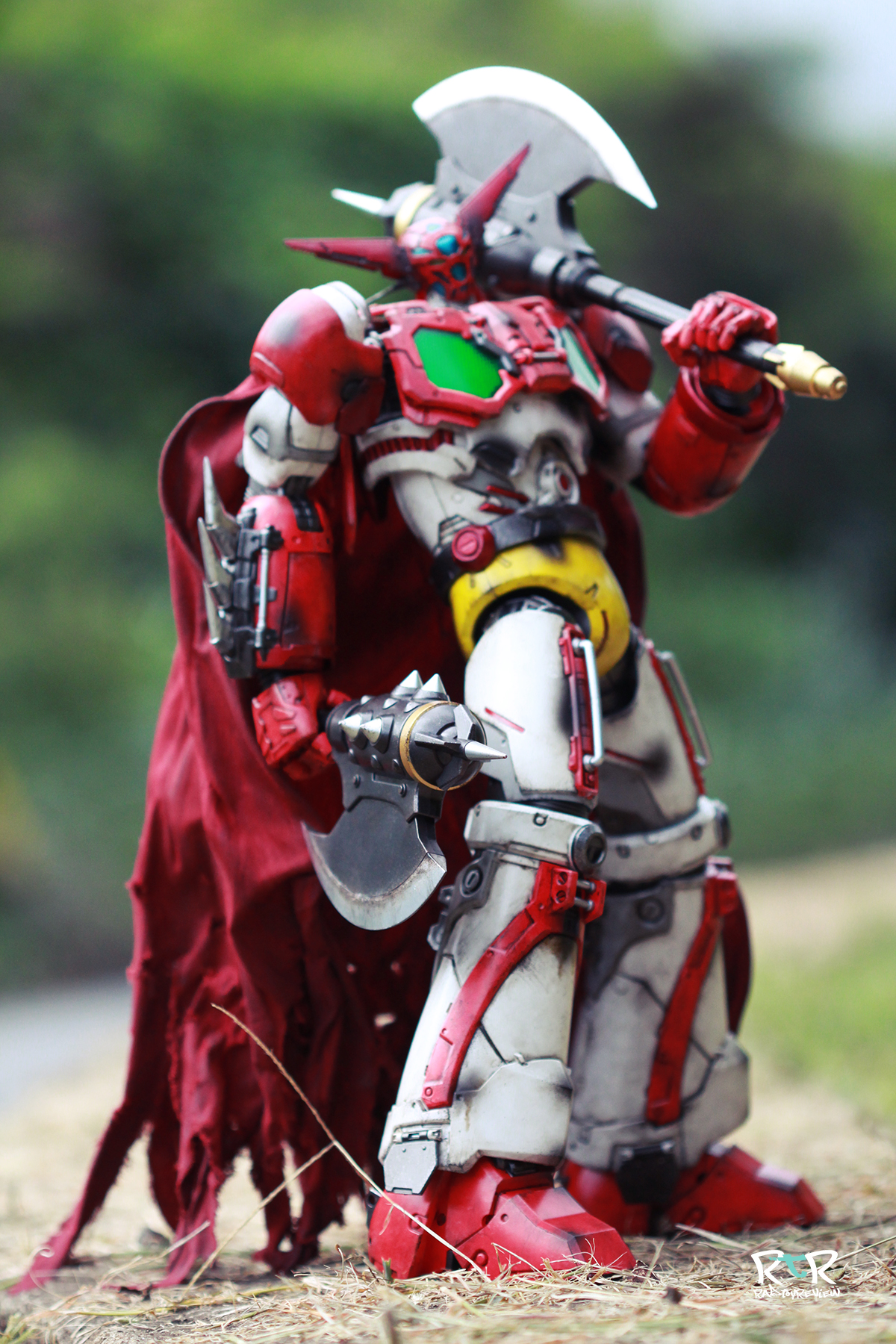 Lights! There’s always fancy lights and LEDs in these things these days. Unfortunately, the battery type is once again AG1 which isn’t the kind of battery you can run to just any convenience store here in the states and get. ThreeZero used them in their EM208 figure from the Robocop movie reboot(review here). In that case, they provided the batteries with the sample so I got to show off all the pretty light features. For Getter Robo, they did not. Lucky for me, I still had 3 from the EM208.
Well, maybe “lucky” isn’t the word.

First off, there are two locations to install your set of 3 AG1 batteries. The first is the back of the head, which at first glance seemed easy enough. Nope. Getting the little pop-off cover detached resulted in several chipped nails and some paint damage to the toy. I wasn’t thrilled about that, but with batteries in hand, I installed them, closed him up and flip the tiny switch.

I know the batteries work fine, EM208 was puffing on them just moments ago. I mess with them a little longer to make sure it’s not user error until ultimately deciding that it must be an issue with this review sample. 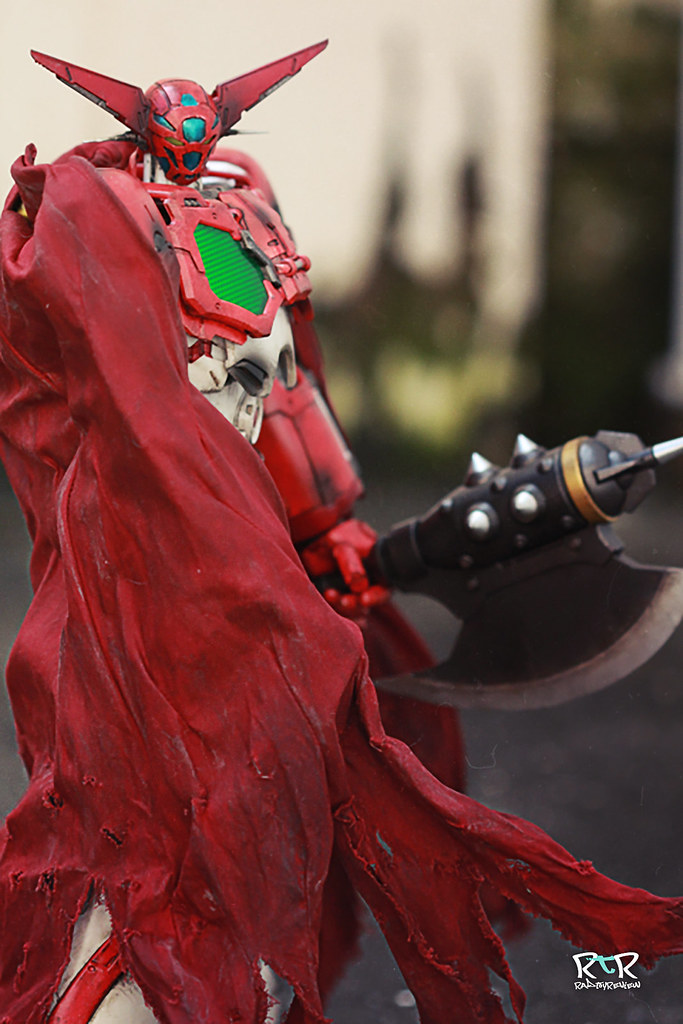 Moving on to the torso, you’ll find a similar “pop-off” cover is on the small of his back.  You can’t see me right now, but I’m using the term “pop-off” SOOOOO loosely. That cover apparently requires dynamite to remove. I literally couldn’t get it to pry off. My fingernails still shredded from the other cover, I broke out a tiny flat head to try and wedge it in there. Couldn’t do it. More scraped paint and plastic, more words that hopefully my daughter won’t remember me saying when she decides what her first words are to be.
So, unfortunately there’s no way for me to show off the light features. I’m sure this is EXACTLY what Christopher McCandless felt like when, half starved and sick in the wilderness he managed to hunt and slaughter a moose only to be completely unable to cook the meat or clean the carcass. It becomes this huge waste of energy and he destroyed something beautiful in the process.

I guess just try and imagine the majesty of lights glowing like a rainbow flood from Getter Robo’s eyes and chest. *eyes closed… “Sigh.. it’s beautiful, isn’t it?” 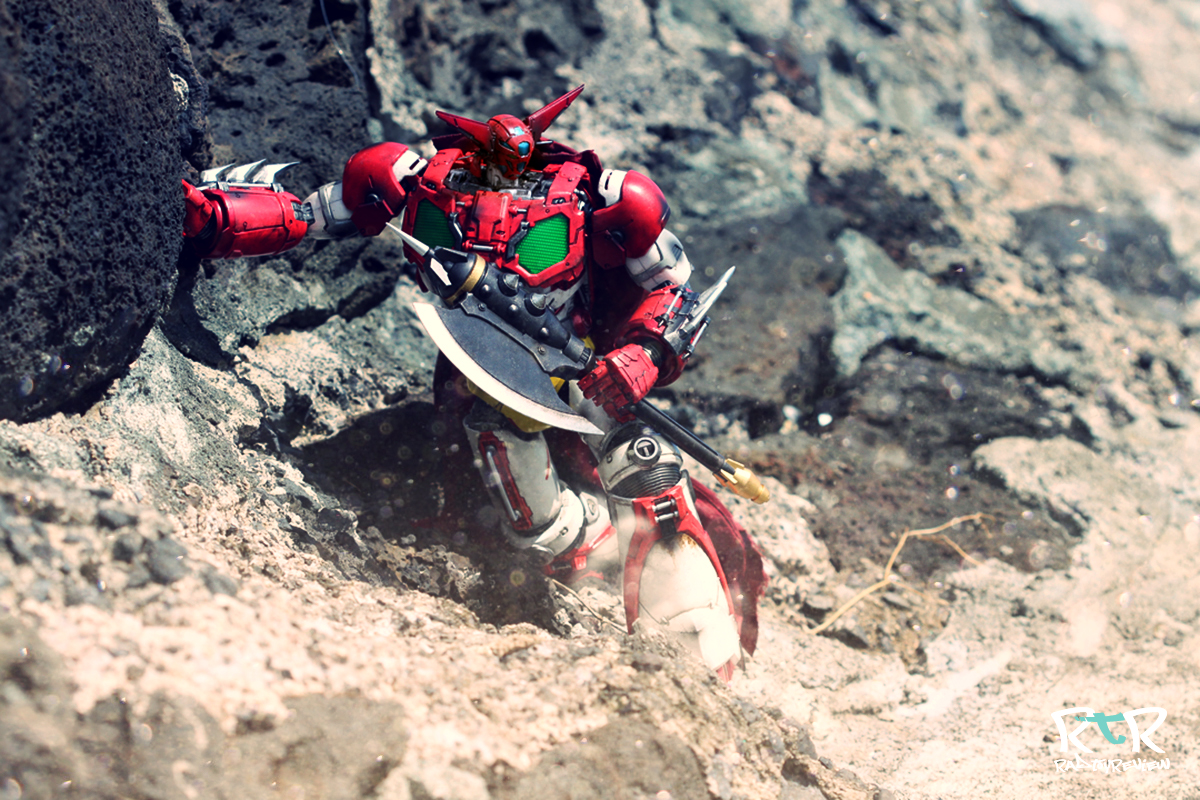 A few things you probably noticed if you’re a fan of the old anime Getter Robo. One is that, Threezero’s version isn’t comprised of three different manned vehicles that can be transformed and combined, ala’ Voltron to form Getter Robo.  If you’ve seen the cartoon, unlike Voltron, the way the three vehicles combine is more space magic than mechanics. More morphing than transforming. It’s also something I had to look up and observed from watching the opening from the original anime series. You can watch that here, if you like! 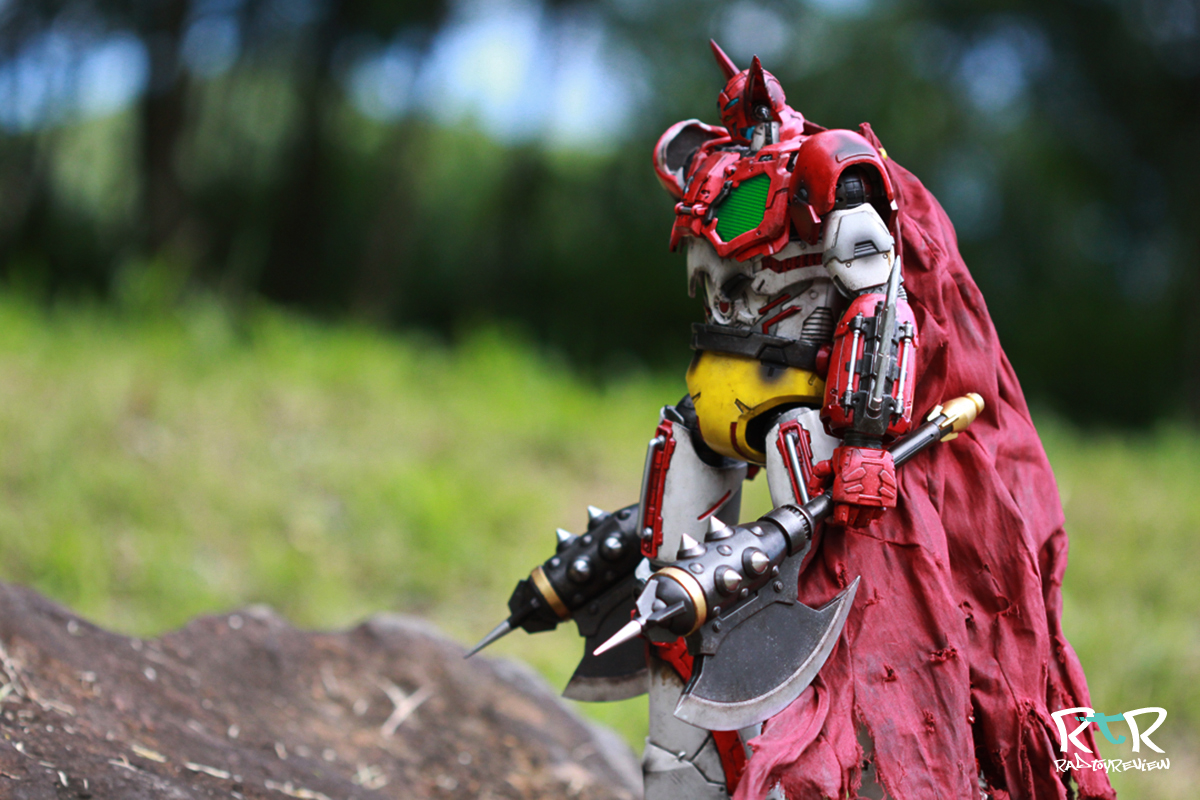 Much like ten year old me, I wasn’t incredibly familiar with Getter Robo before I had him in front of me. Sure, I recognize the original from what I assume is my many years perusing random anime and going into Japanese toy stores whenever I can. But I didn’t know much about his story, what he does and why he does it. I also didn’t know that this is just one of 3 forms Getter Robo can take! (Something else I found out while reading up on him) This form is by far the coolest looking and probably most recognizable so solid choice on that front.
I may not have known much about Getter Robo before today, but I do know a badass big robot toy when I see it. And I think ThreeZero’s Getter Robo is one of the badass-est. 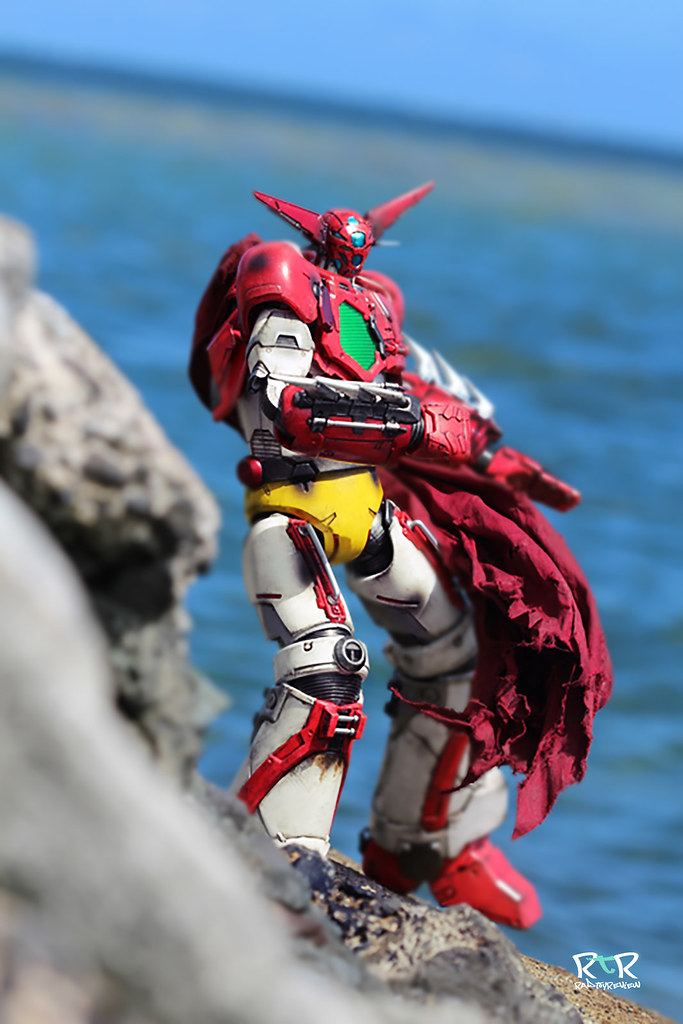 Getter is currently available at threezerostore.com where you can preorder the one I just reviewed OR the threezero store exclusive, menacing black variant Getter 1 who also comes with a few extra exclusive accessories.

Please remember what I reviewed today is just a sample, what you end up with might be slightly different and almost certainly improved. I’ll bet you a dollar that at least the box will be fancier.

Delivery Date: Estimate 1st quarter 2016
All unpaid orders would be cancelled after the sale.
Orders are not transferable to third parties.

Thank you Cody, Kim and everyone at Threezero for sending this guy along for review! He’s awesome. Aloha. 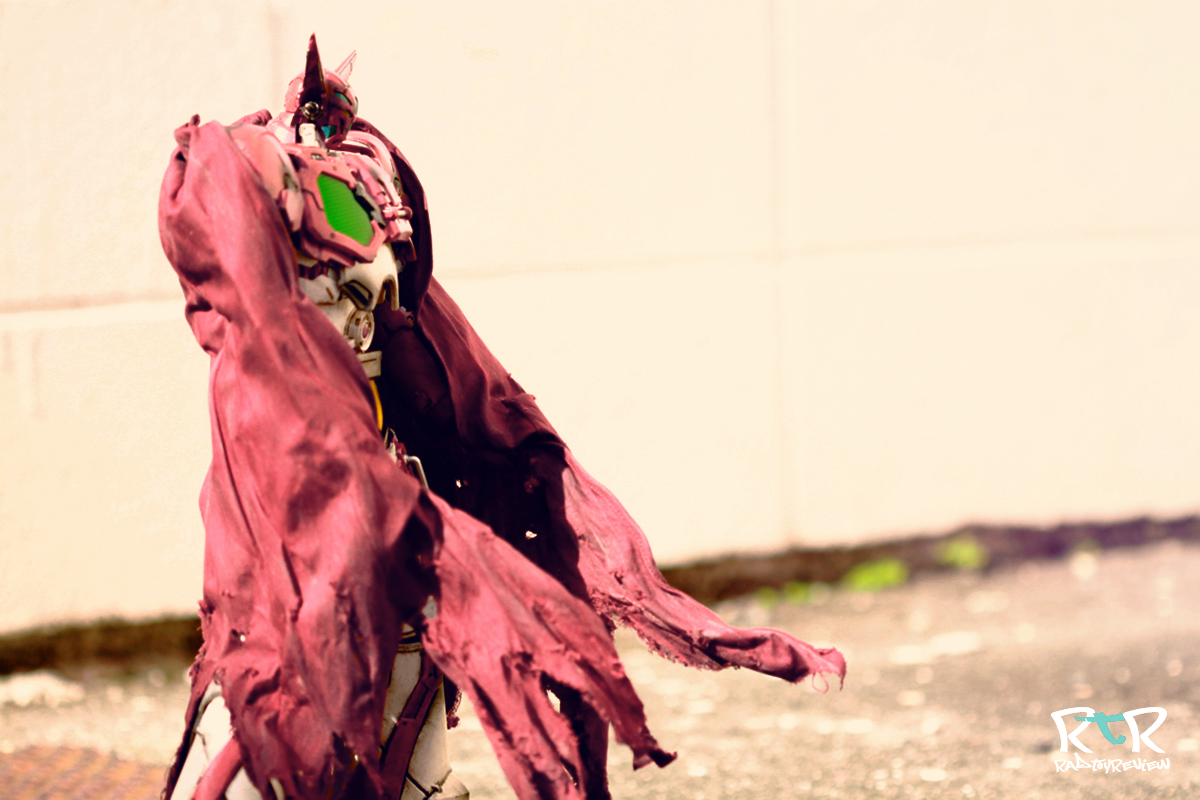