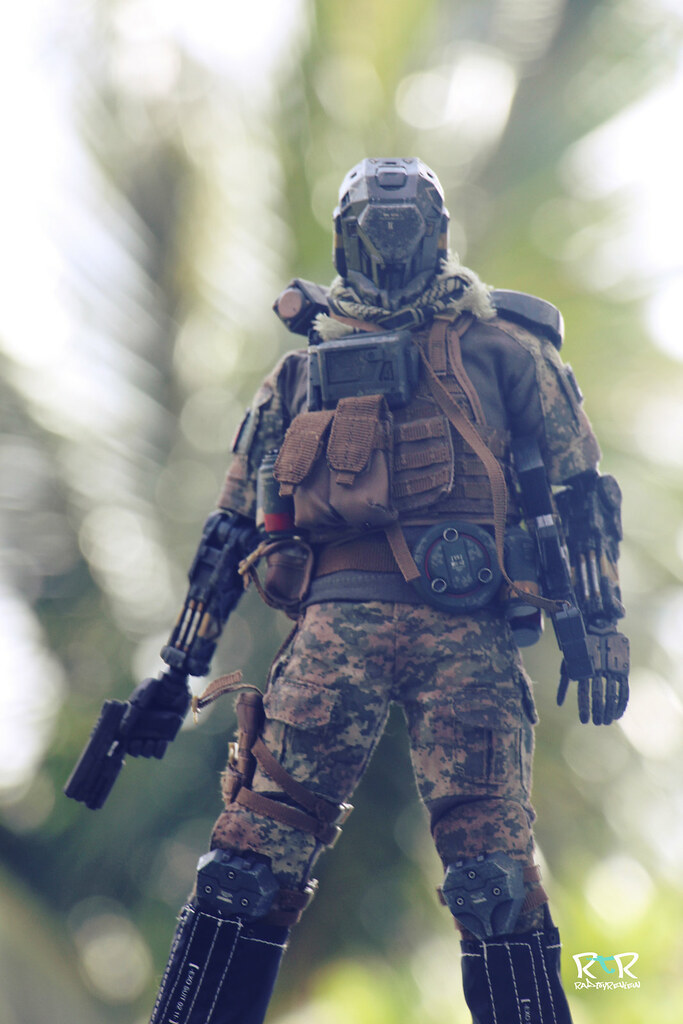 Secret Master is the second major figure release from Devil Toys, as part of the “WOO: World of Order” storyline.

When the teaser images of this guy first popped up I was immediately pulled in. I loved the robotically enhanced military aspects of him. The design felt like some of the stuff I’d admired from various 3D artist who’s work I follow. It also reminded me a little of Acid Rain, only in ⅙ scale… and that’s a good thing.

At $165 including worldwide shipping, the price felt a little high but still reasonable enough to take a chance on a new toy-line from a company I had only very recently been made awares. On drop day, I made my preordered of the limited edition figure and then subscribed to the notion that the thoughts of WOO would slip from mind as months turn into a year of waiting and waiting for him to arrive.

But life has a sense of humor and about a month later, I was contacted by a friend who happens to also write for Devil Toys (check out the backstory for Secret Master he helped develop here). He tells me that the dudes over at DT want to send me a sample of SM to review.

Jon – “George (George Chu, the designer/creator/guy in charge) wants to send you a sample to review”

Me – “That’s cool but I’ve already pre-ordered it”

Jon – “Well, they’re supposed to start shipping in about a month”

Me – “What? Really? These guys are hitting their delivery date? That’s a thing?  A practically brand new, unheard of company making something like this and they’re going to hit their date?”

Less than a month later, I’m informed he’s been shipped. A couple days after that, it’s sitting here on my desk.

The reason I’m boring you with that story is simple. It’s a testament in showing that these guys deliver. Maybe it’s from my years of collecting ThreeA or the seemingly never ending wait between pre-ordering a Hot Toys figure and when it actually hits your doorstep, but I honestly couldn’t believe it. Before I’d even seen the figure, I was impressed by Devil Toys and the speed in which they were able to get this guy out to the public. They may take your money up front, but they’re not sitting on it for 9 months to a year.

As I write this, I’m sure several people are already seeing theirs delivered and will probably experience the same thing I did when I opened mine. 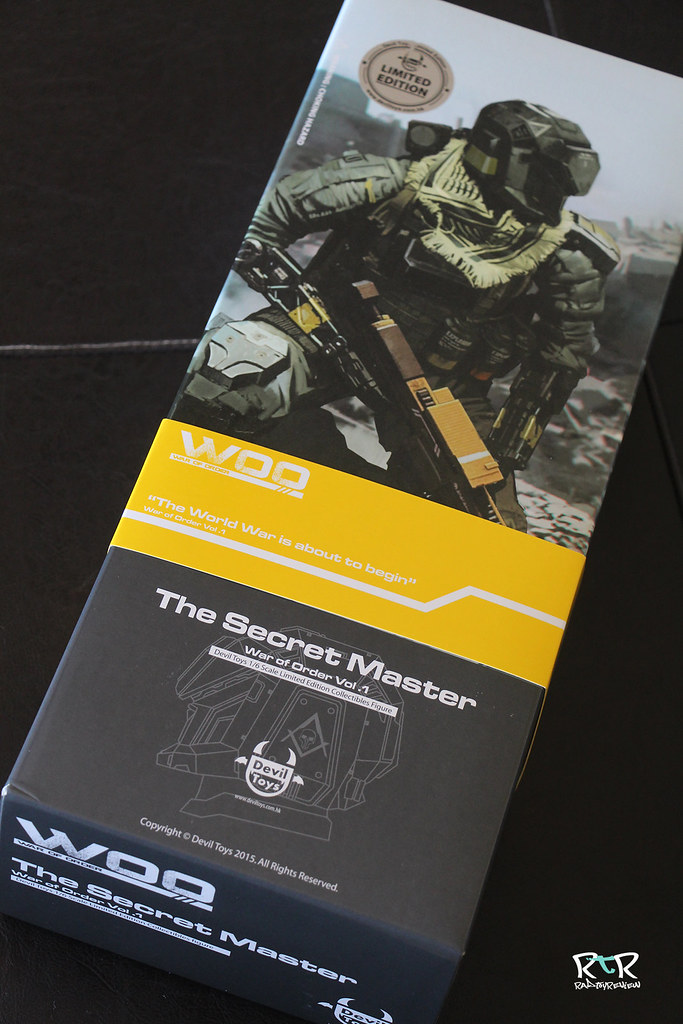 I may have gotten an “early-ish” release just so I could write up this review… but the packaging and everything else is the 100% final version (that I paid for). I gotta say, this pack is sharp. A durable art box featuring a glossy, high rez print of The Secret Master doing his thing. A classy, removeable, bright yellow band holding it all in place. The overall design is strong with a sort of balance of imagery and icon design I tend to gravitate towards. 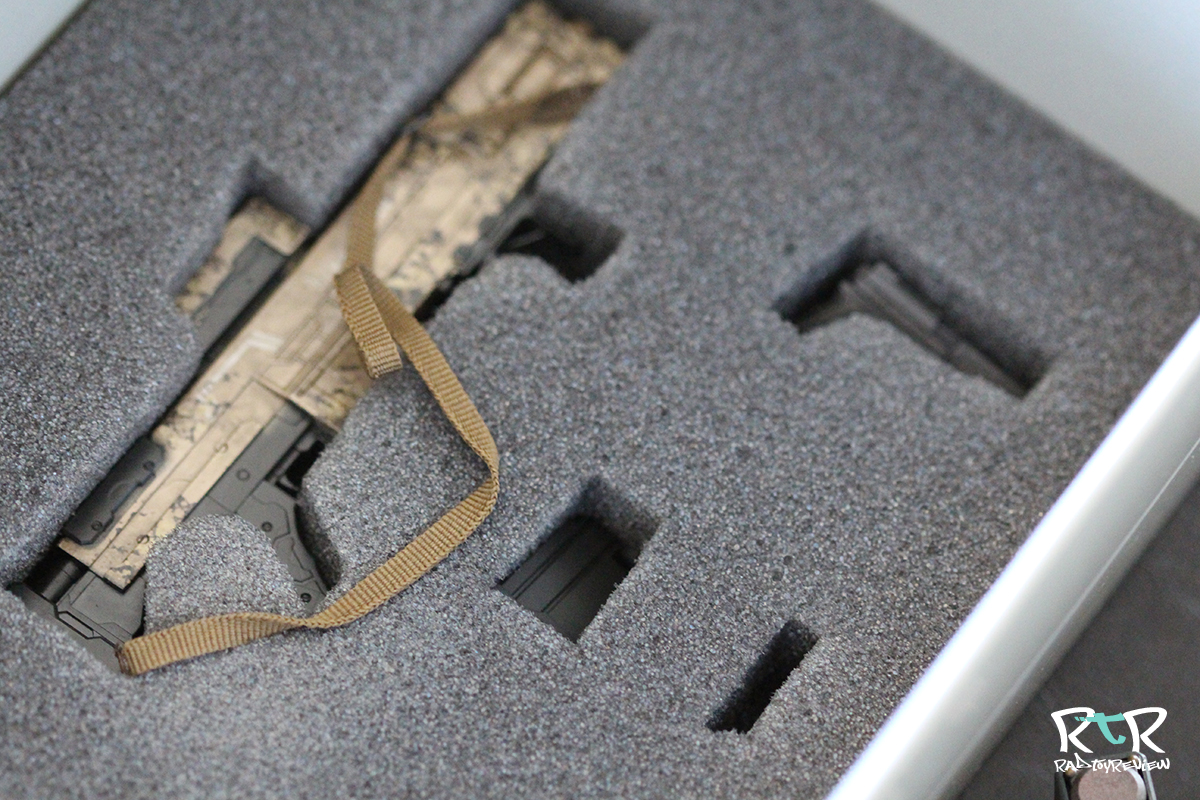 Inside is a layered cut out foam cage that hold the figure and his various accessories in place. Nothing fancy, but efficiently put together.

One more little thing is this postcard that teases Devil Toys next release. Can’t wait to see more! 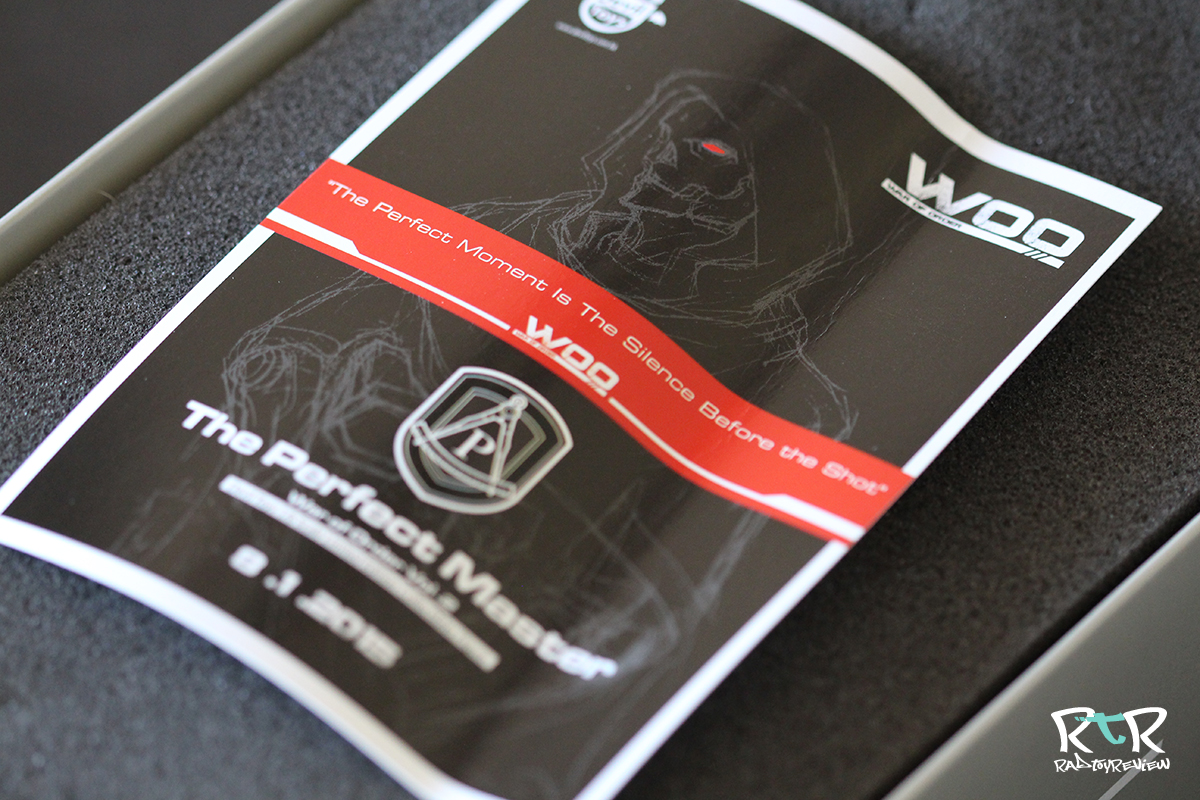 update: ganked this prototype image of what appears to be Perfect Master from the webs. Enjoy! 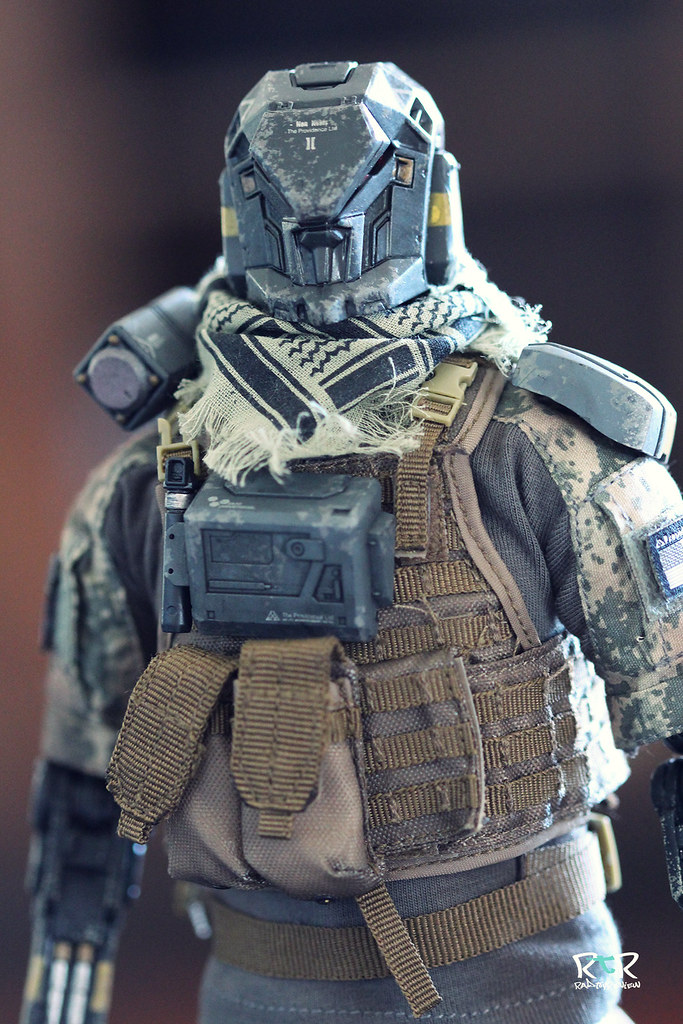 Devil Toys did not skimp on accessories. I’m gonna bullet point this to keep things easy for everyone. 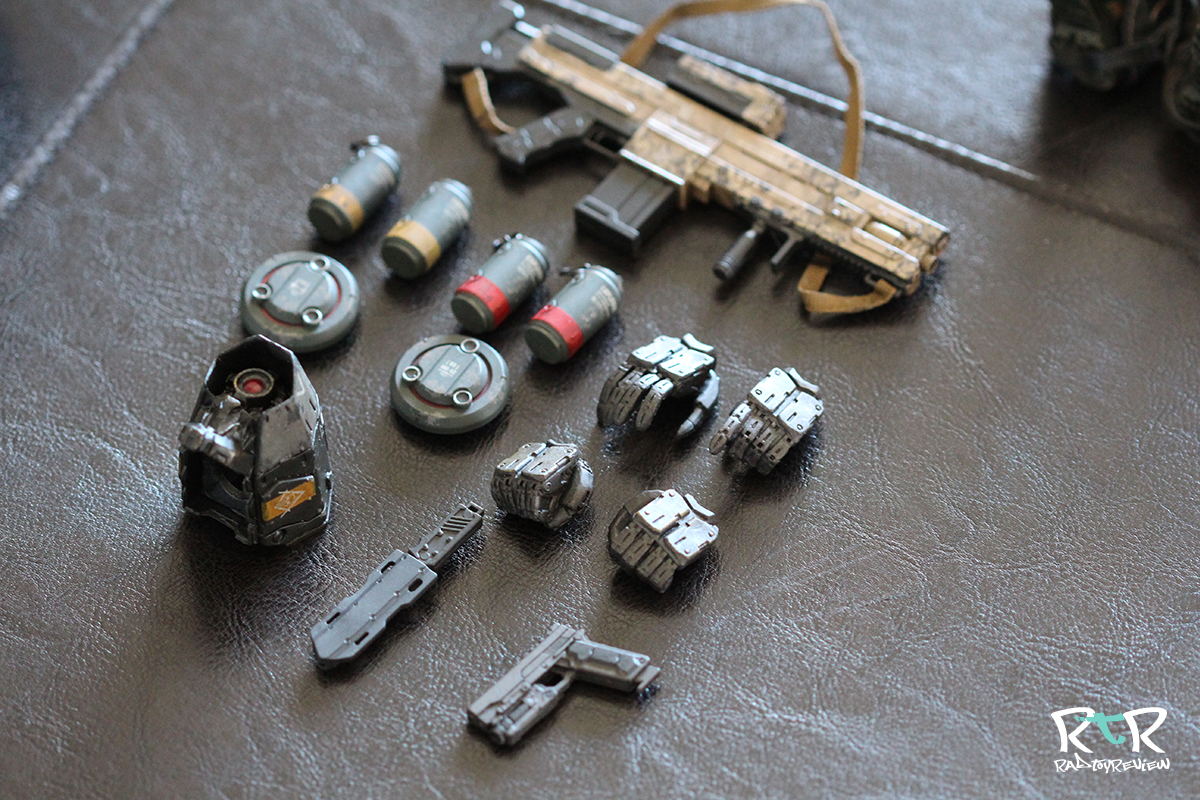 Each and every one of these items are very nicely detailed and feel very solid. The hands are just the slightest bit soft to assist in getting them around the rifle grip and grenades. Of hands you get clenched fists, gun/knife holding and relaxed grips for a variety of poses. 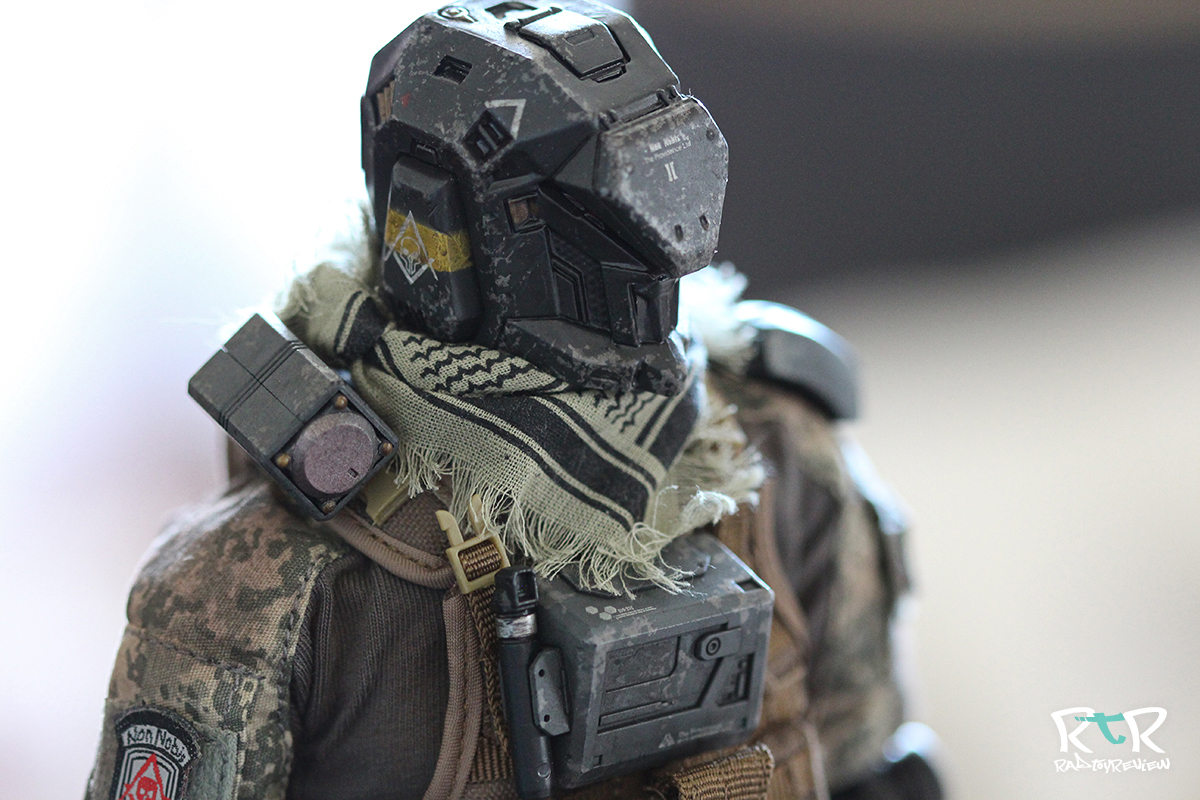 The very first thing I looked at was the cool, robotic head sculpt. I was honestly a little surprised at how great it looks. I sorta assume that some toy companies are bound to skimp a little on their final product to cut cost and this is often seen in the paint.
Not here. 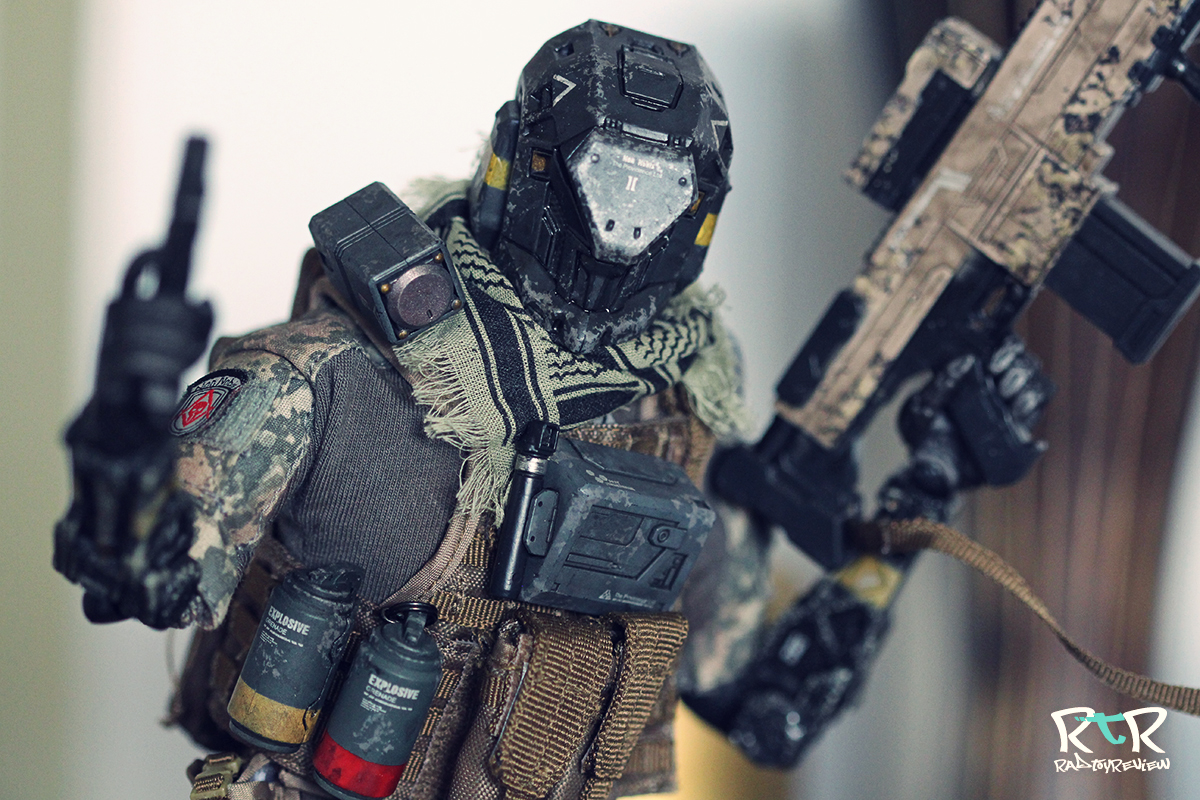 The paint is sharp with nice detailed scratches and marks across the steel plates. It’s not exactly dirty, but it’s really nicely weathered and looks as though SM has been in a few scraps. 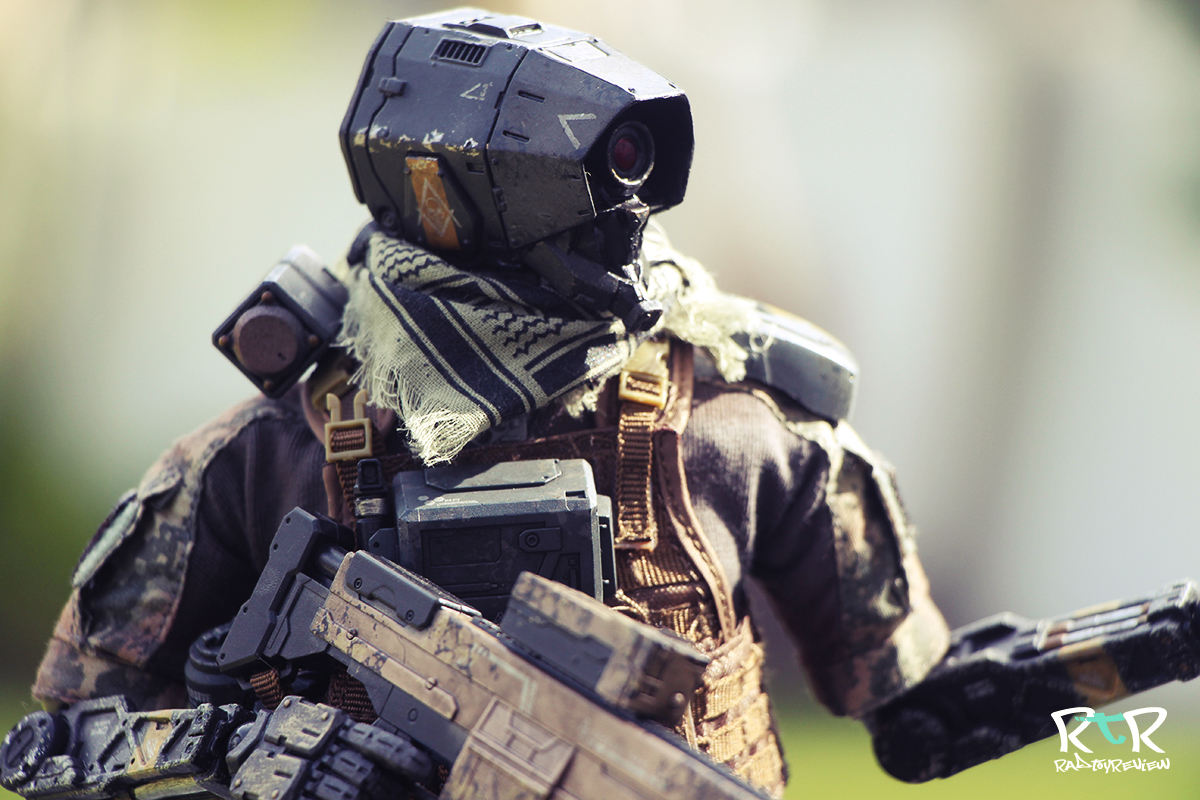 As an added bonus, at the close of the Secret Master preorder, George and company announced they’d be giving an extra head (Secret Trooper) to everyone that preordered, completely for free. Not only is that just a super stand up thing for a company to do to build a fan base… it’s also a nice indication of the kind of flavor of future figures we can expect from Devil Toys. 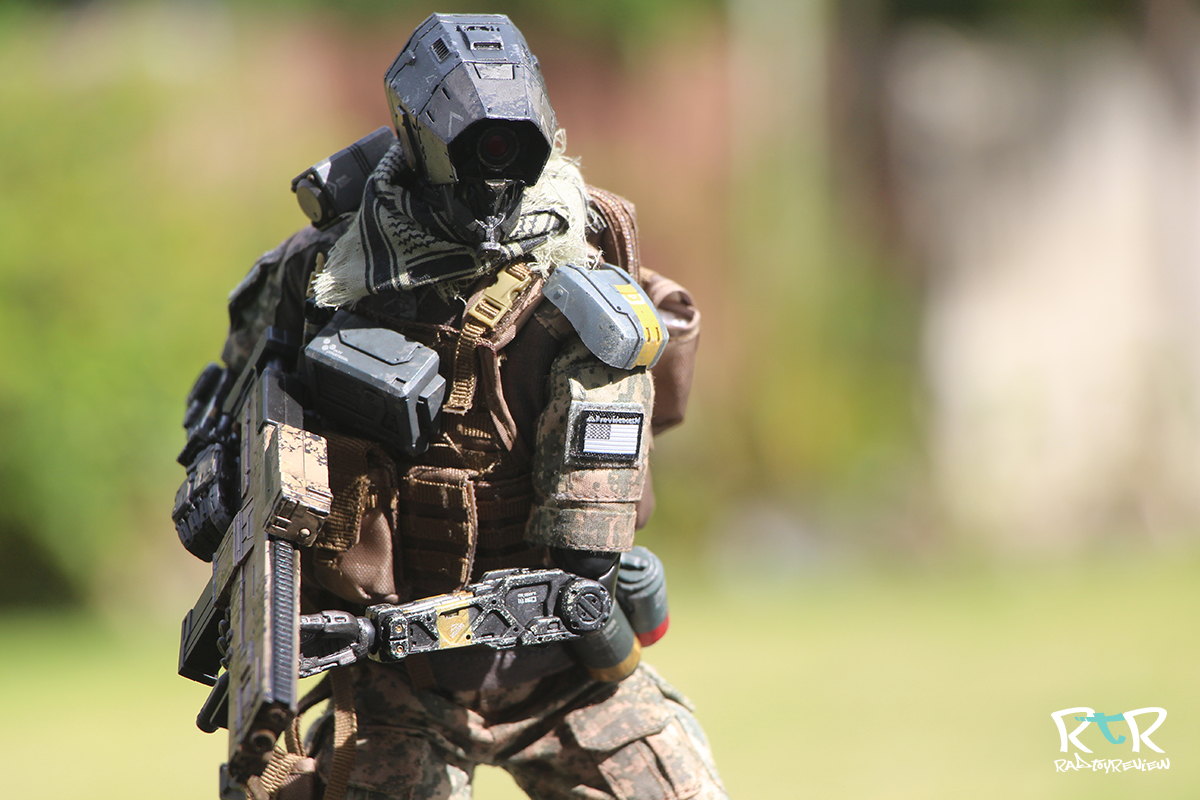 So if you’re not 100% sold on the first head, you have another one to swap it out with. Or even better, have a spare TrueType sort of body laying around? There’s a good chance it’ll fit so you can build your own custom robot commando. 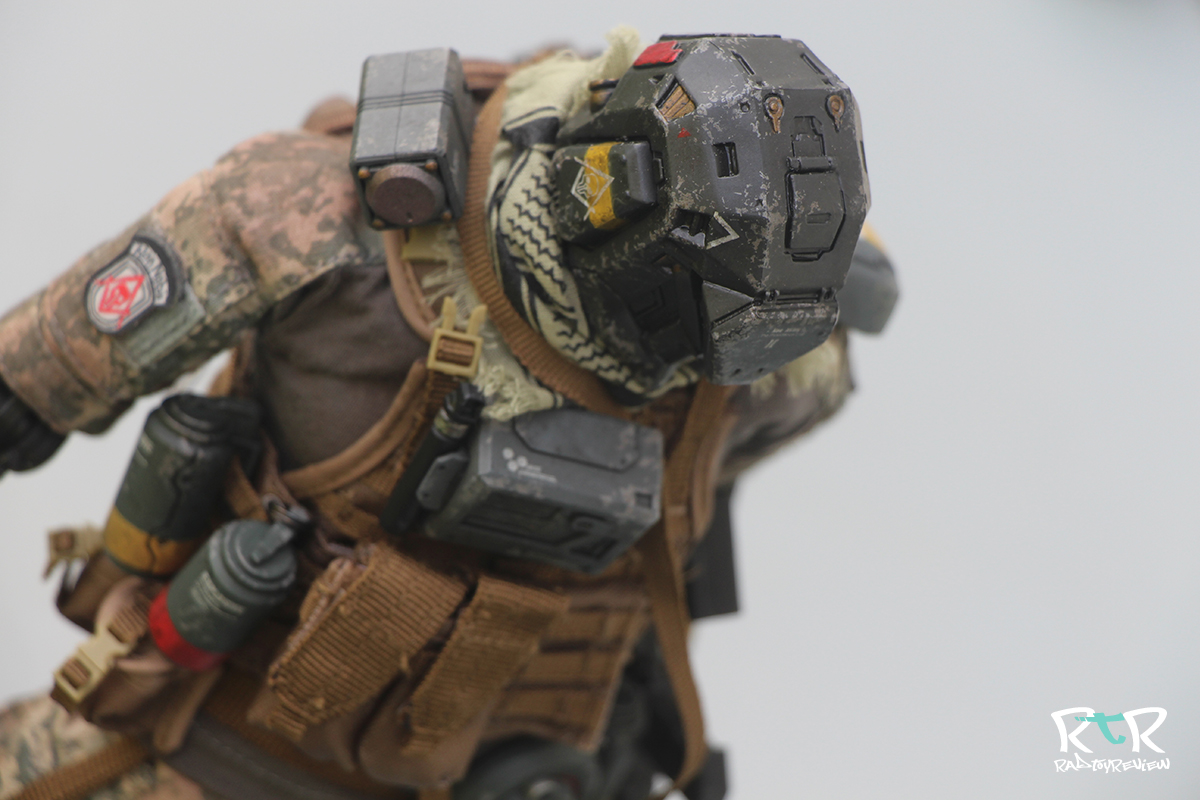 Moving down the figure, the next thing that stands out is the robotic arms. Like the head, these are awesome and very nicely painted and weathered. From some of the preorder photos, I thought the arms looked a little thin… but in hand, I think they communicate a lot clearer visually and work really well. 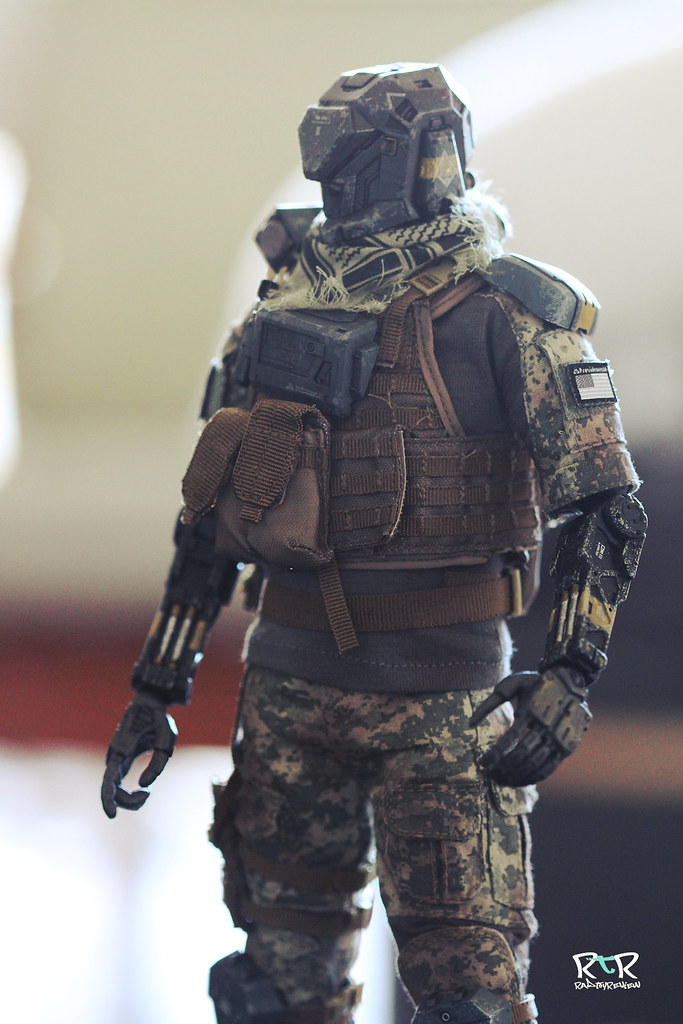 The robotic elements of the arms only go to the elbow, which is smooth black plastic. It’s not that big of a deal to me since the sleeve covers it up most of time anyway, but it may bother some that there’s no transitional scarring or something a little more realistic.
*I recommend reading the backstory here… some people seemed confused into thinking this guy’s supposed to be a 100% cyborg, hes’ not. 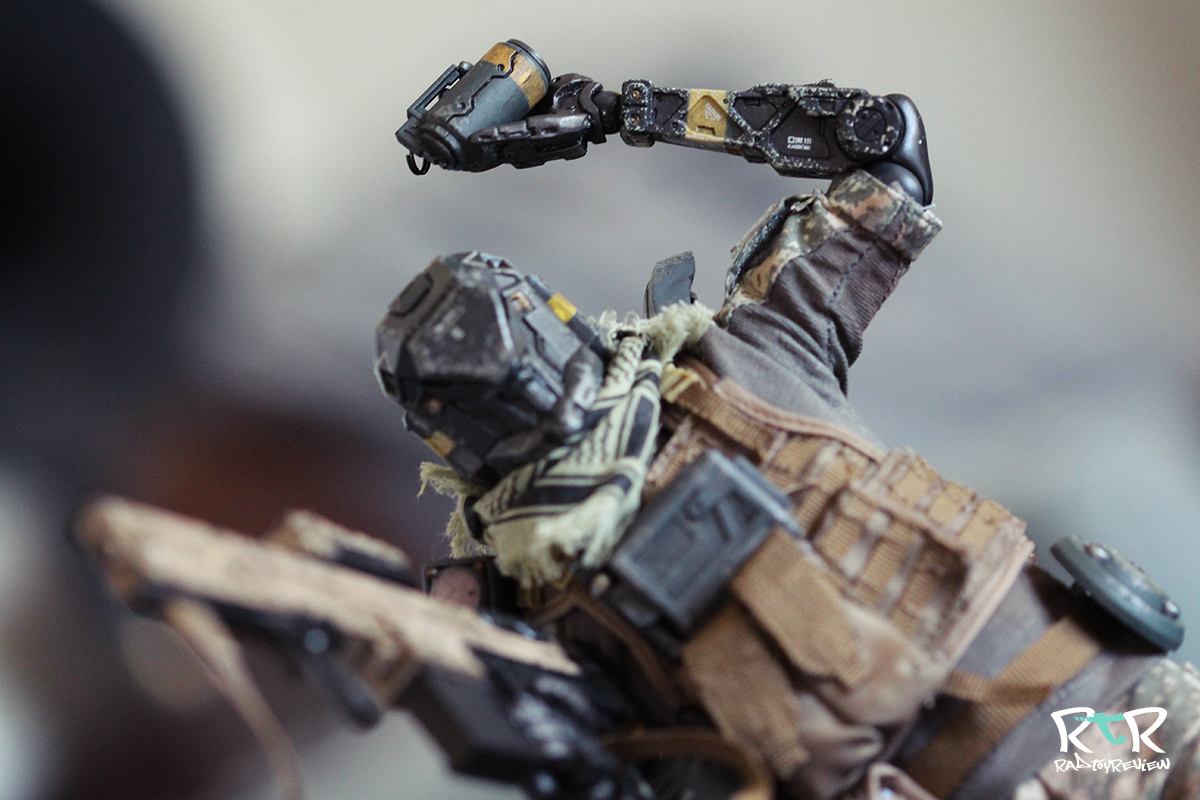 As mentioned before, Devil Toys used a modified TrueType body as the base for Secret Master. I confirmed with Chu that this isn’t simply a bunch of doo-dads bashed on top a standard TT body, but a newly developed TrueType body with greater action areas to allow for a wider range of poses. 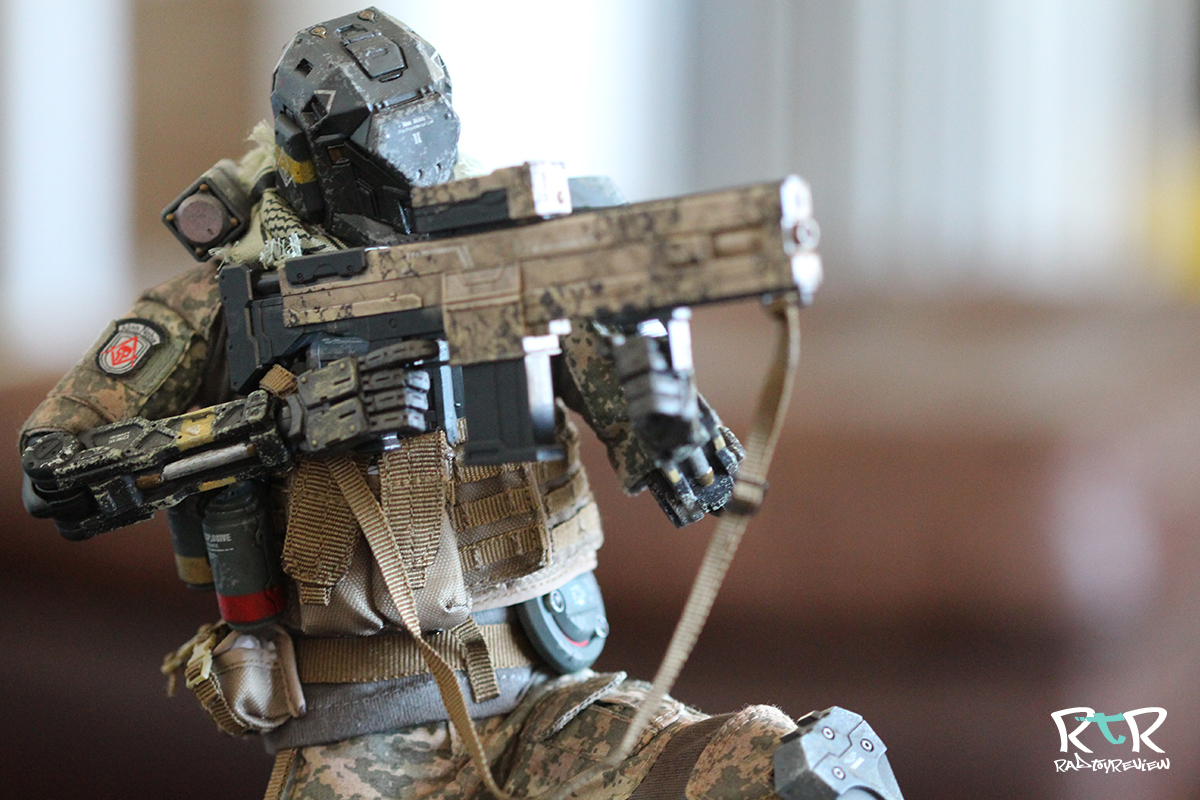 Whatever he did, works. Secret Master is very poseable. Even with the various layers of clothing, there really isn’t much that gets in the way of anything. I could achieve every pose I wanted to put him in. Maybe it’s the lack of a fat suit or padding… but having played around here, I’m having difficulty understanding why some of my Hot Toys figures are so restricted by their gear. 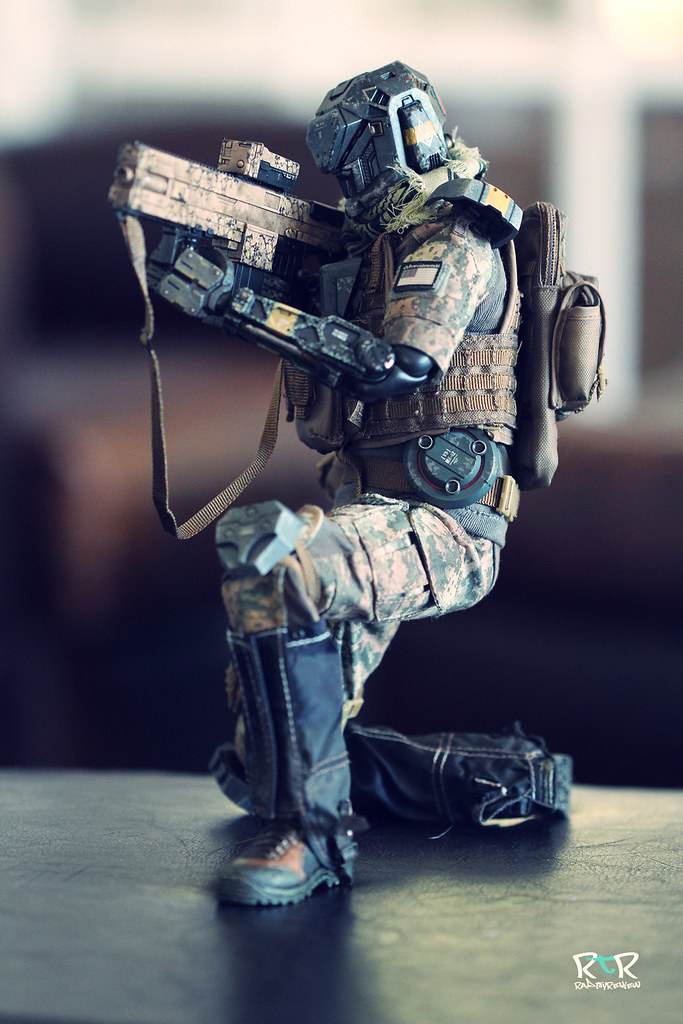 Another thing I want to note is just how SOLID everything on SM feels. From his joints to the body build to the accessories, I never once felt like I was going to damage something by moving or handling it too rough. (cough… Hot Toys) Even popping the head on and of to swap them out didn’t cause me any stress. If I had a concern it’d be that there’s no spare wrist pegs included, something that I think should be anytime there’s hands swapping at play. 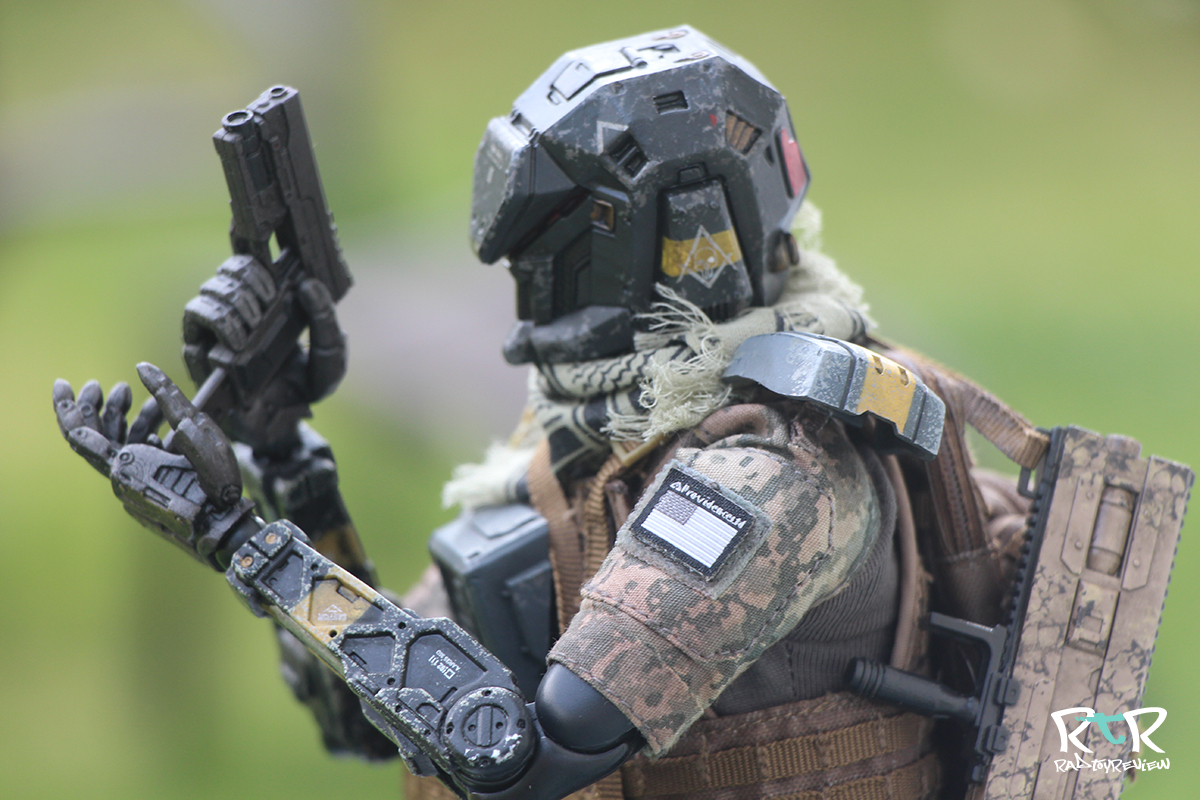 Overall, I’m very happy with how Secret Master came out. There’s no question that Devil Toys did an outstanding job. However, while I’m 90% thrilled with him… there’s an aspect of the figure that kept sorta nagging me. 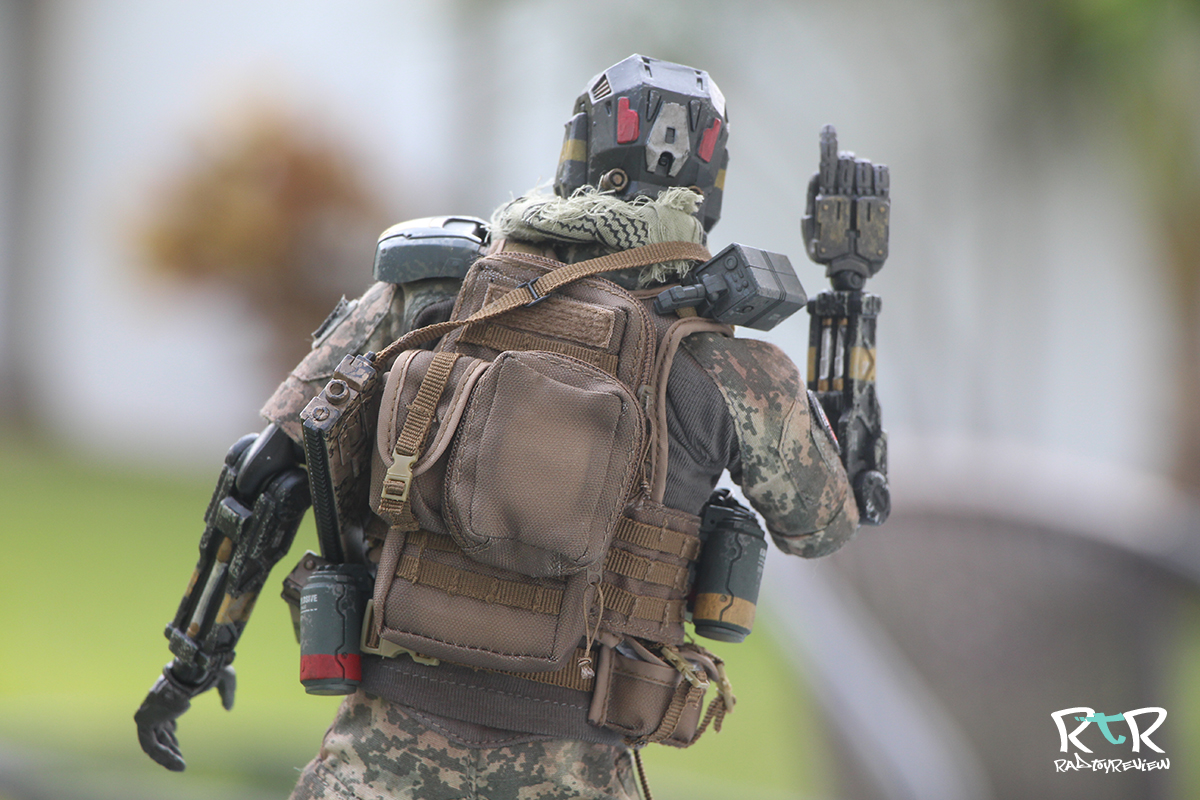 This of course, is my opinion and you may think I’m crazy for having it.

The outfit itself feels a little generic, a little kitbashed. It all works well together as an outfit for the character, but at the same time, I can’t help wishing that it matched the artwork on the box cover instead.

You can see it appears as though he has some sort of grey/green jumpsuit on with yellow zipper pulls, just gives it a real modern war feel to me that this “Gulf War” looking camo doesn’t. 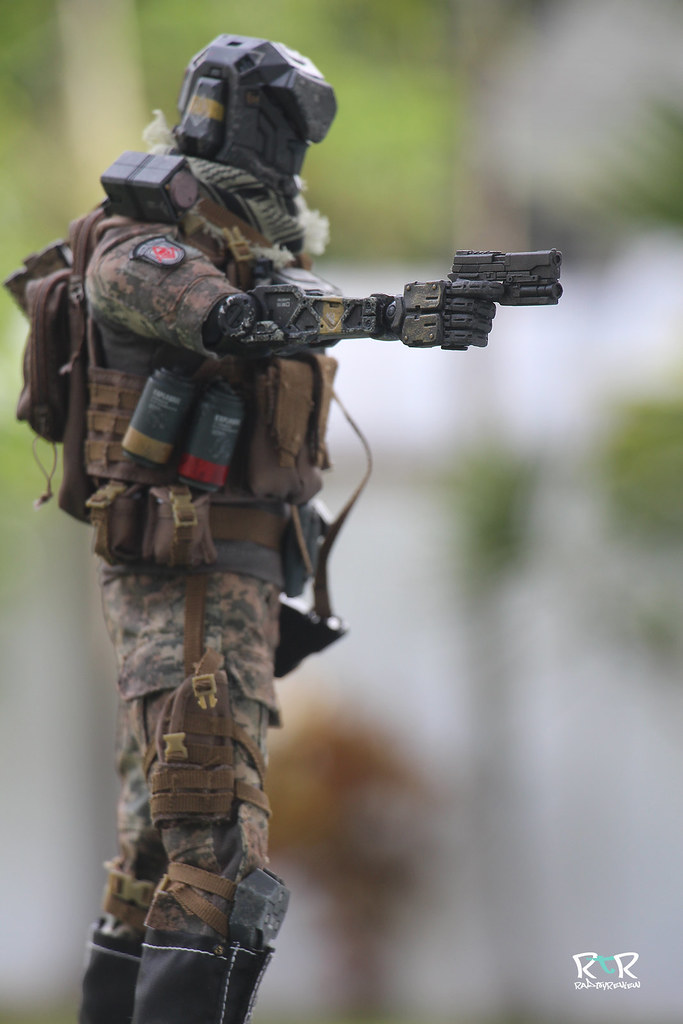 Maybe it’s bothers me more because it comes across so clean compared to the scratched and paint chipped robot areas. I mean, there’s faint, tan stains you can sorta make out over the camo but really this guy looks almost like he just came back from the dry cleaners. It’s just all too neatly put together. Possibly in an ironic twist, the one aspect of the outfit I personally don’t love is those weird ankle chaps… but they’re also the only cloth element to feature any sort of noticeable dirt, grime or age to them. 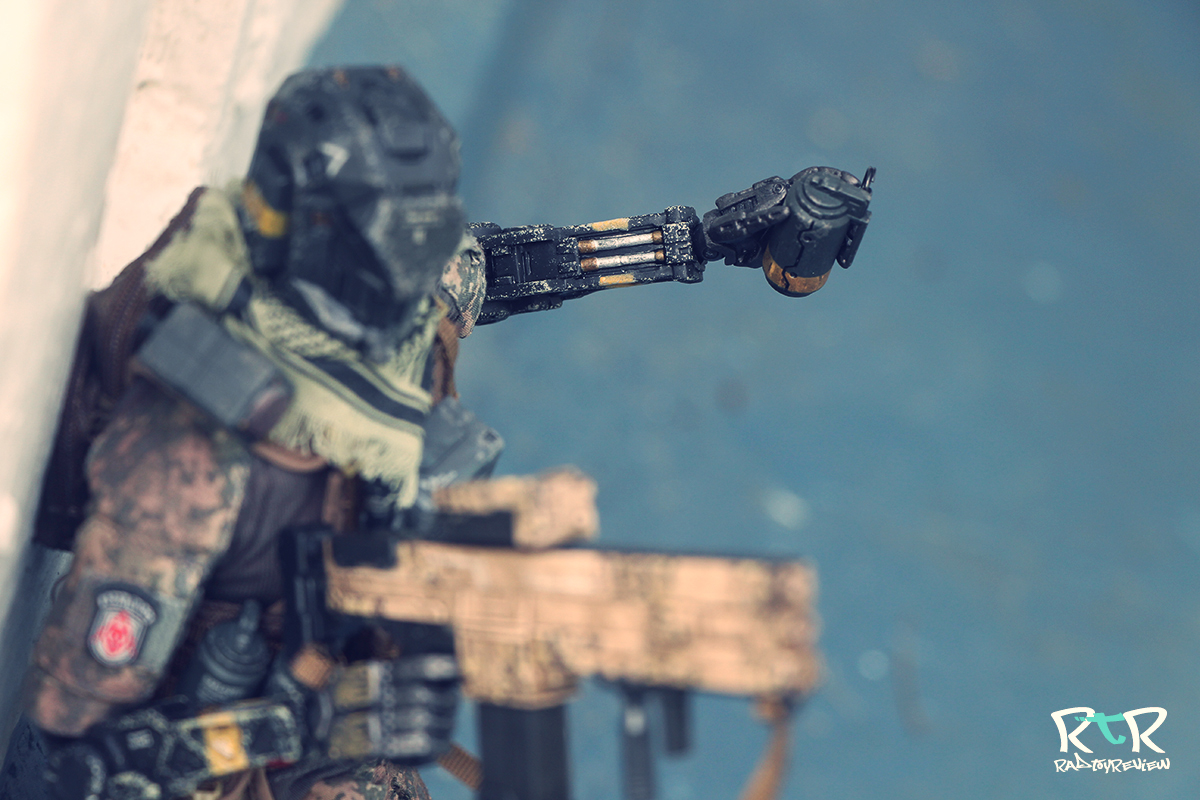 I wouldn’t be surprised to see several people bash up their own equally amazing looking figures using the unique parts given us by Secret Master and/or the Secret Trooper head. In fact, I expect it! Heck… I’m even tempted to hop on Evil-bay myself and start searching for loose military gear to see what kinda Secret Trooper I can customize to stand alongside SM on the shelf. 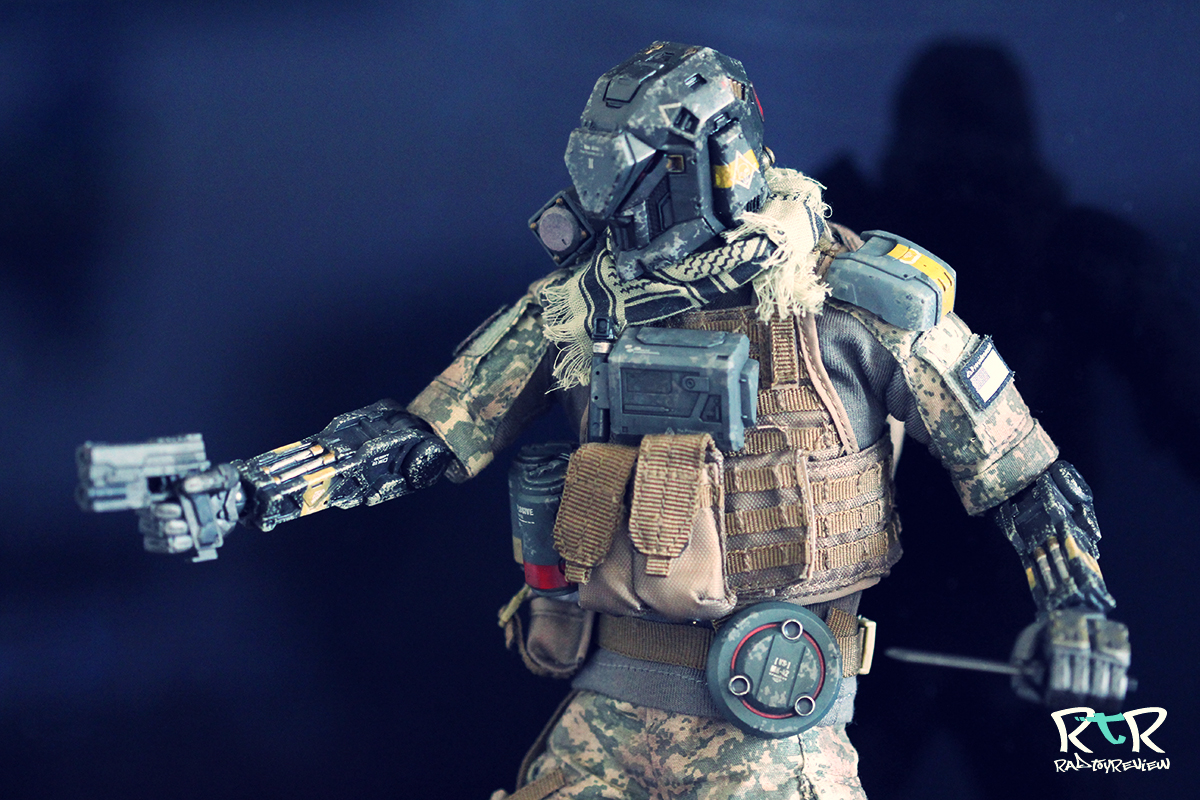 That one criticism shouldn’t detract at how great of a success story Secret Master is for Devil Toys. As they build up the WOO world with more interesting figures and releases, George and his small gang of toy designers will only improve on what’s already a very impressive beginning. 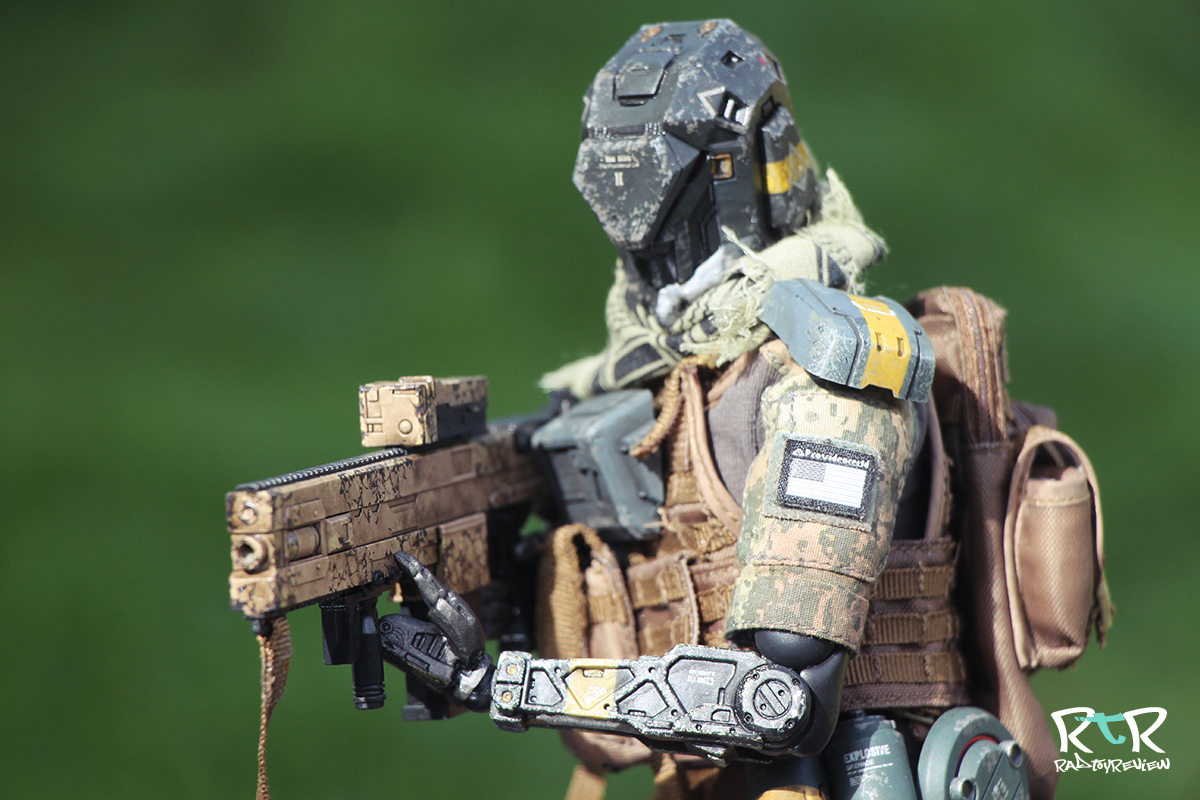 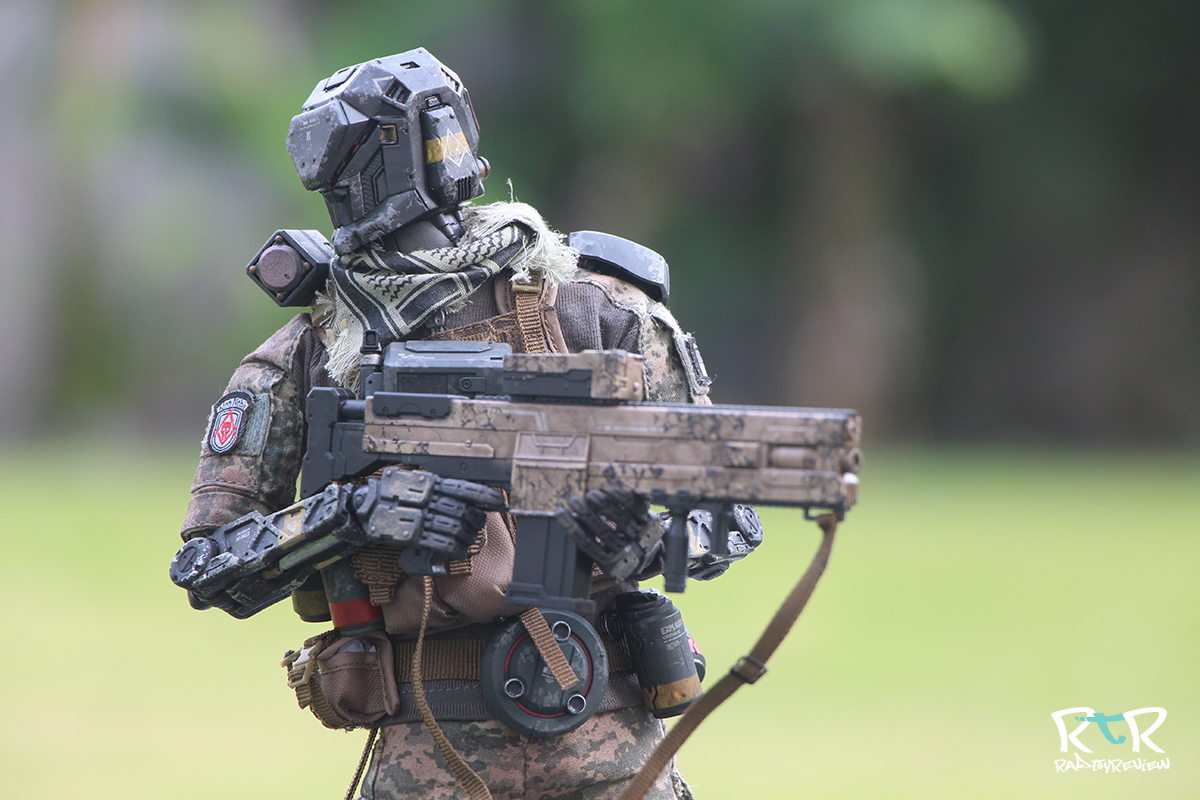 It’s been awhile since I’ve reviewed a toy that delivers almost exactly what the initial promotional photos promised us, thus meeting my expectations. I have to say, not having very much to complain about almost takes the fun out of reviewing it. 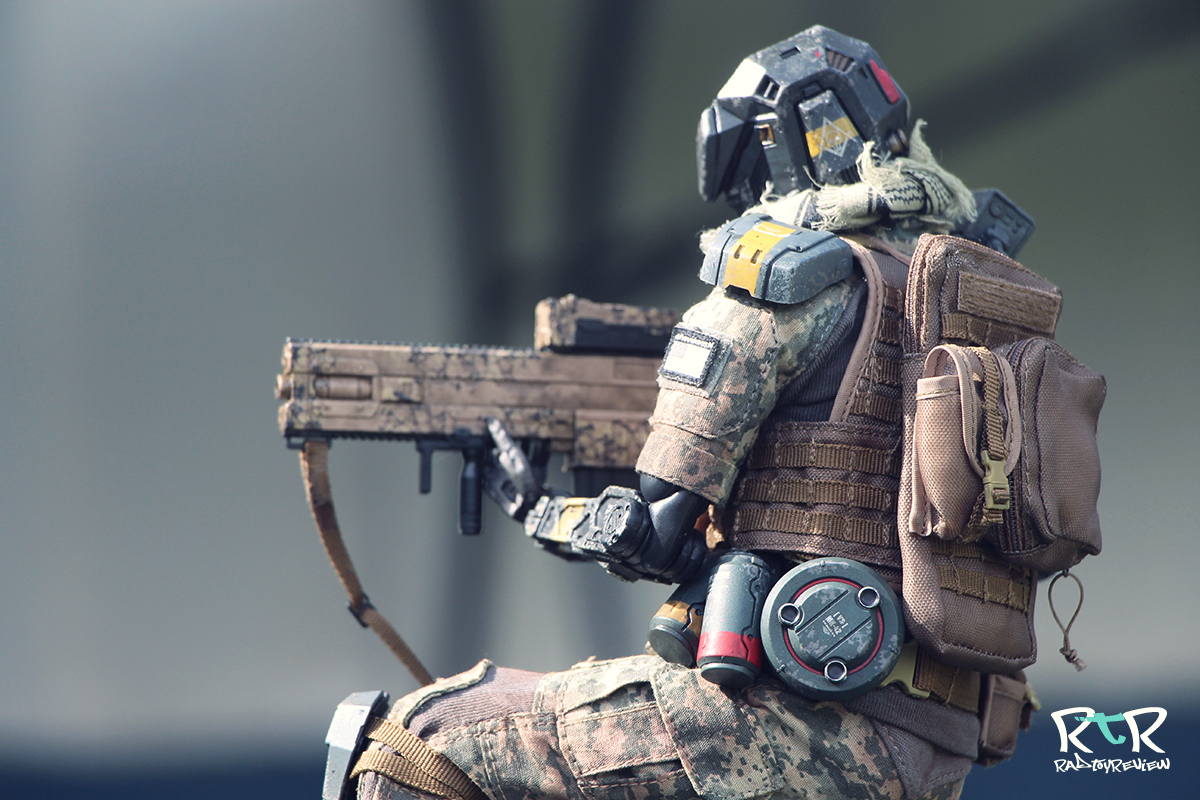 This may have been your first introduction to Devil Toys… some of you may not have been very familiar with them before reading this review today.

But believe you me, you will be. 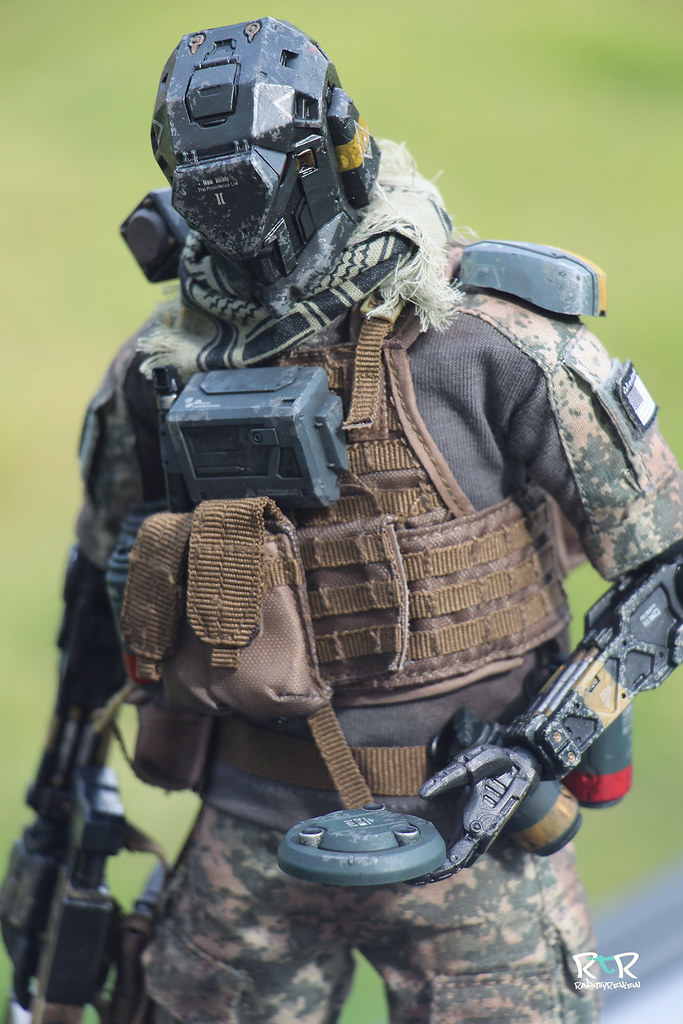 If they keep putting out quality figures like Secret Master, when asked about high end ⅙ toy companies, collectors will be rattling their name off alongside the likes of 3A, Hot Toys, ThreeZero, 1000Toys, DamToys and Sideshow.

Heck, eventually they may even be the first one to come to mind. 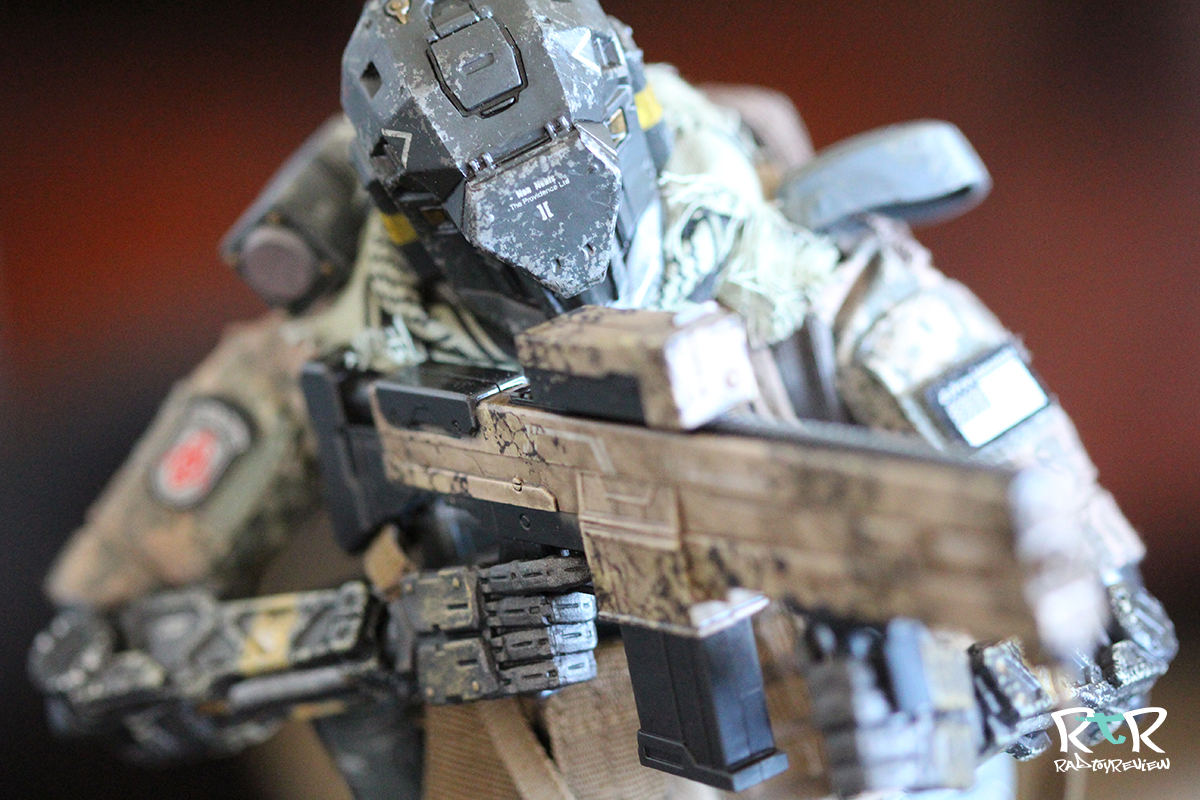 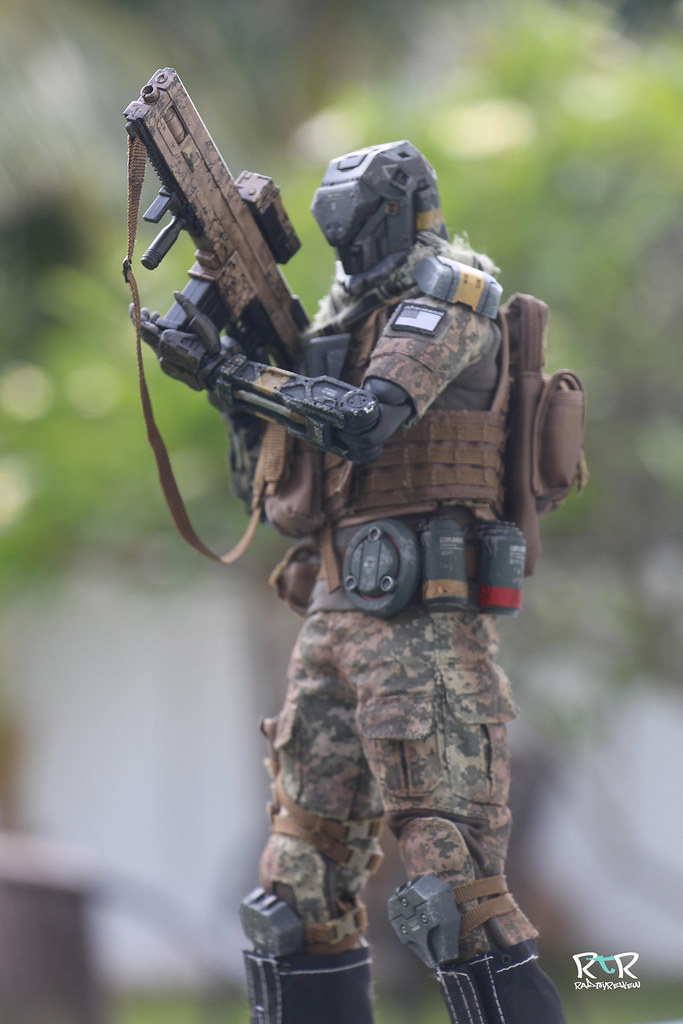 As of this writing, you can still order Secret Master from a limited amount of stock at Big Bad Toy Store! Click here!

Thanks to George Chu and Jonathan Cordeau for helping make this review happen! I look forward to more from you gents! Please follow them on their facebook page to stay updated on their future releases! You won’t want to miss them.

6 thoughts on “*REVIEW* The Secret Master by Devil Toys”