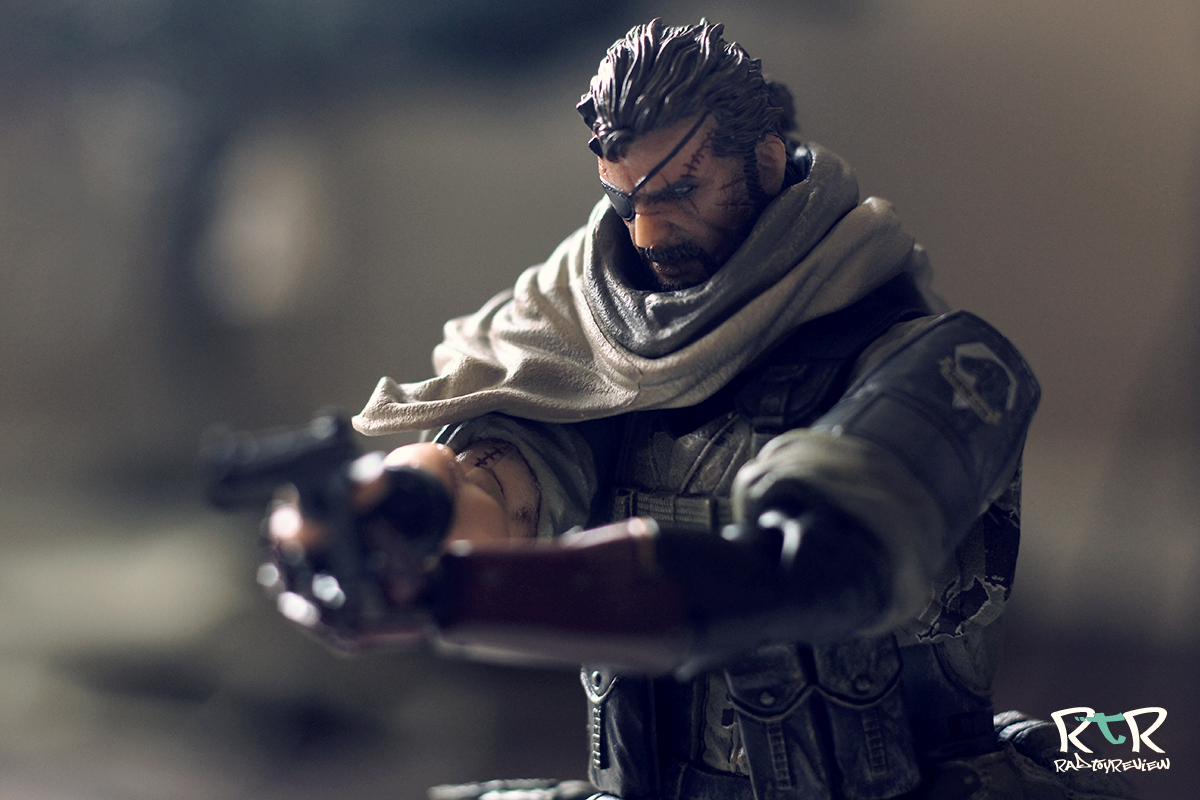 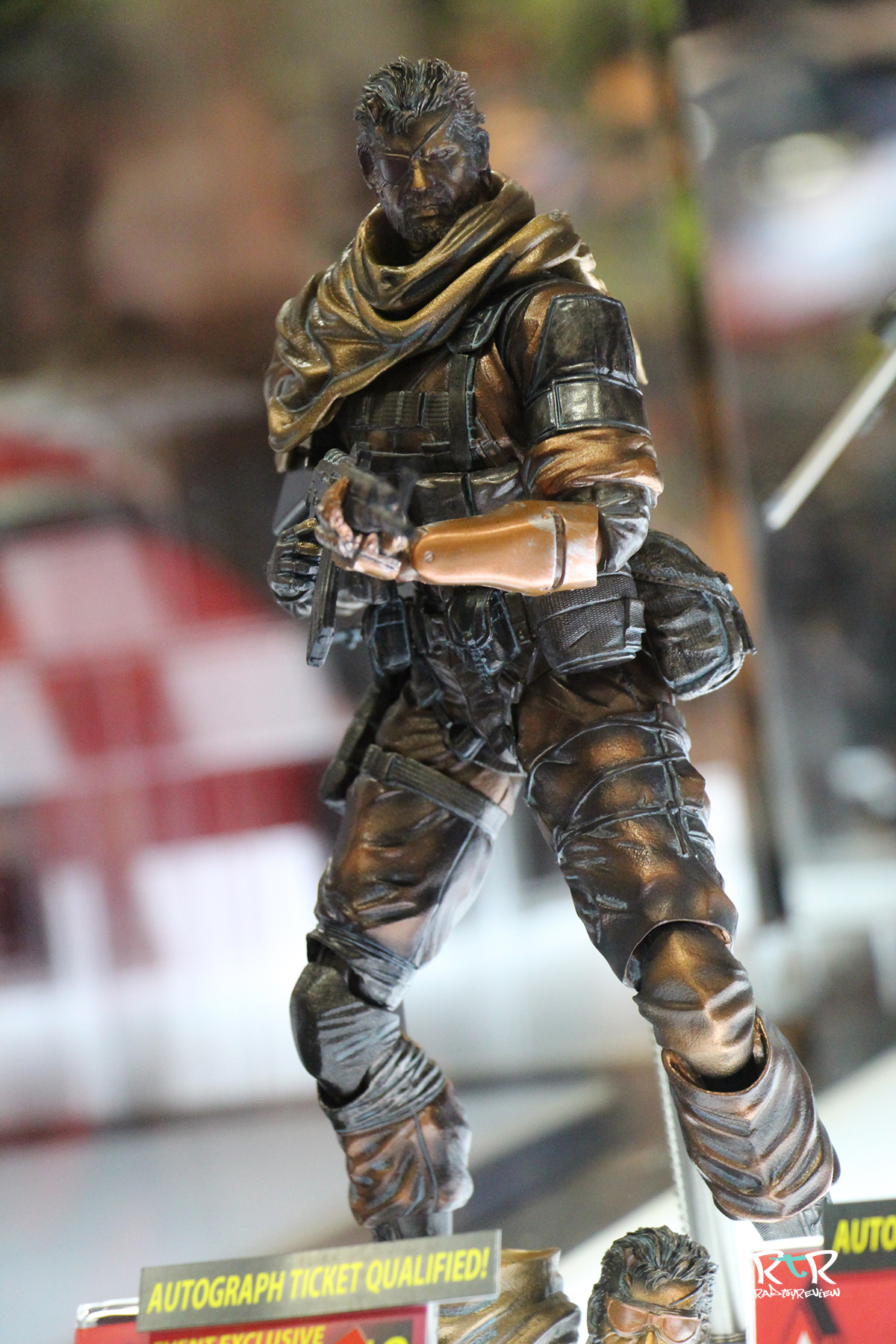 The packaging is exactly what you’d expect from PAK. Dark graphics on a fairly huge box (the figure itself is 11.3 inches tall) with a window on the front that lets you peek inside. No artwork or anything fancy, just a few photos of Snake in a some poses. Then you’re greeted with a bunch of warnings and tiny verbiage in a cornucopia of languages that take up almost half of the back of the box.

I could stop here, but I’ll nitpick.

I’d think that most companies with designers would be striving to simplify their marketing verbiage, if only to limit the amount of mult-lingual clutter it smears all over their boxes. Wouldn’t most people know it’s a toy (thanks to the window) from the upcoming Konami videogame, Phantom Pain (thanks to the respective logos on front). Do we really need a bunch of words advertising exactly what’s in the box and how exciting it is that we have it in our hands? Also, what could they possibly be warning us against that requires so many red and orange bold printed type? I always assumed that at this level (price) buyers are going to be pretty confident in what they’re picking up.. they don’t really NEED the extra push any excess information on the packaging might provide for them.

Simplicity in design.. clean imagery.. etc.. that’s what I’m getting at. That’s what looks great onthe shelf and works well to display. That’s what’s worth writing about.

Anyway, I’ve said to much about it. On to the cool part! 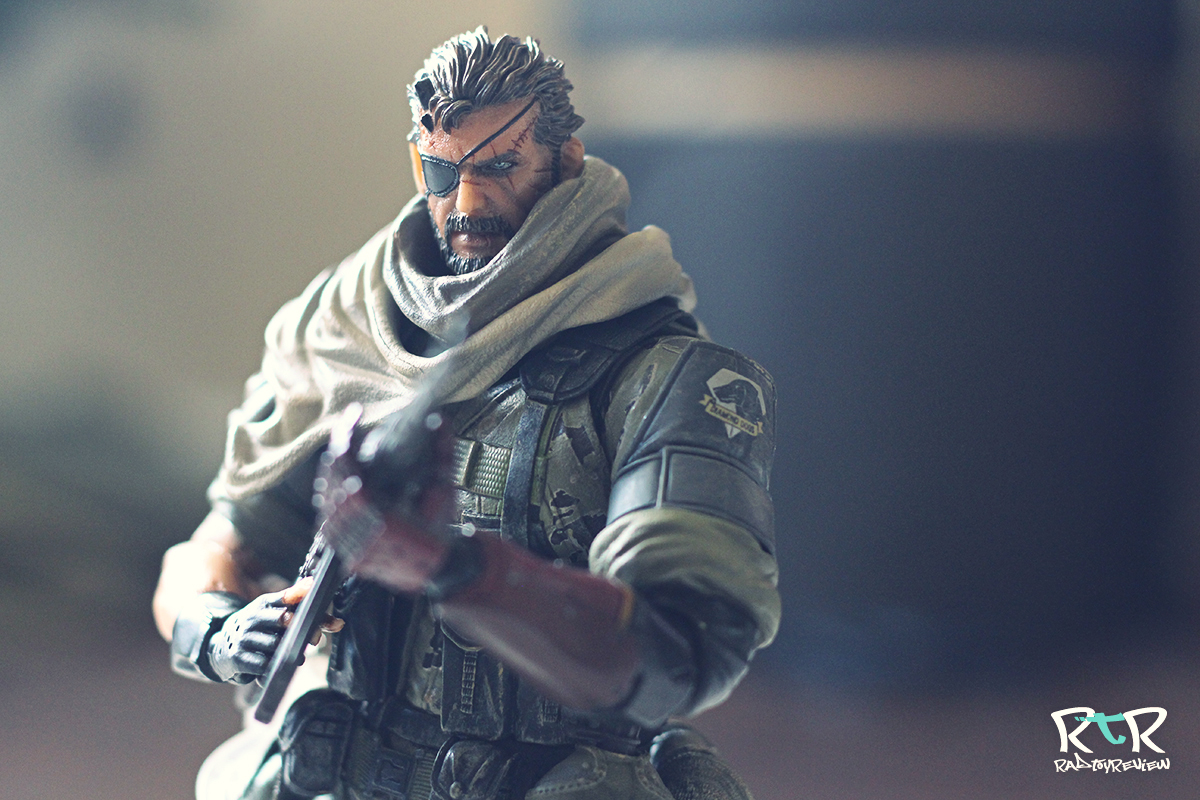 Right away, I knew I was going to like this figure. The head-sculpt looks great with the shrapnel embedded in his forehead and the eyepatch. Snakes been put through the bizness! The eye detail is painted correctly.. no wall eyes ruining his cool look. You get two heads to swap out, the original eye-patched and a goggled version. Along with the head swaps you get different “wraps” to go around either his neck or mouth. The instructions seem to indicate that each head is meant for a specific style wrap, but they all work fine in any combo. 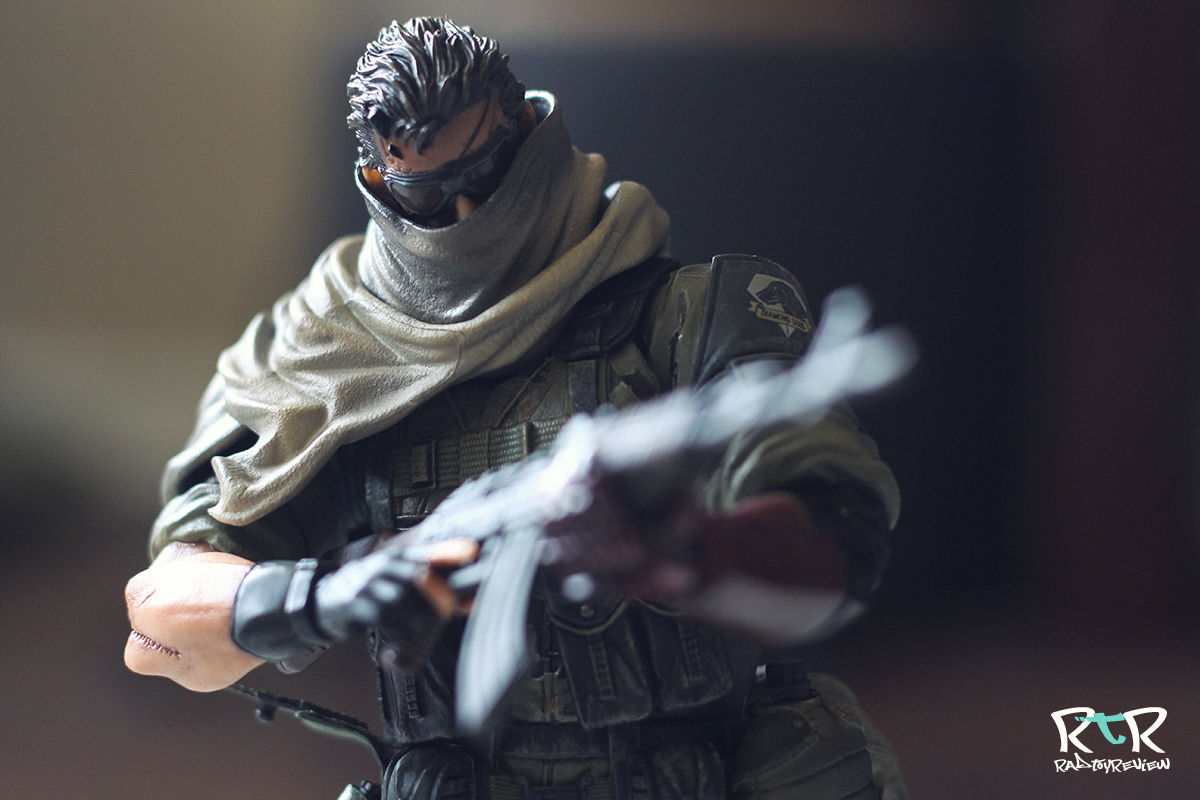 Popping the head off is easy, but popping the other on WITH the mouth covering neck wrap can be pretty difficult. Once you get it on, it certainly looks cool.. but I like Snake’s face sculpt enough that I imagine I’ll display him with the default, eye-patched head to show it off. 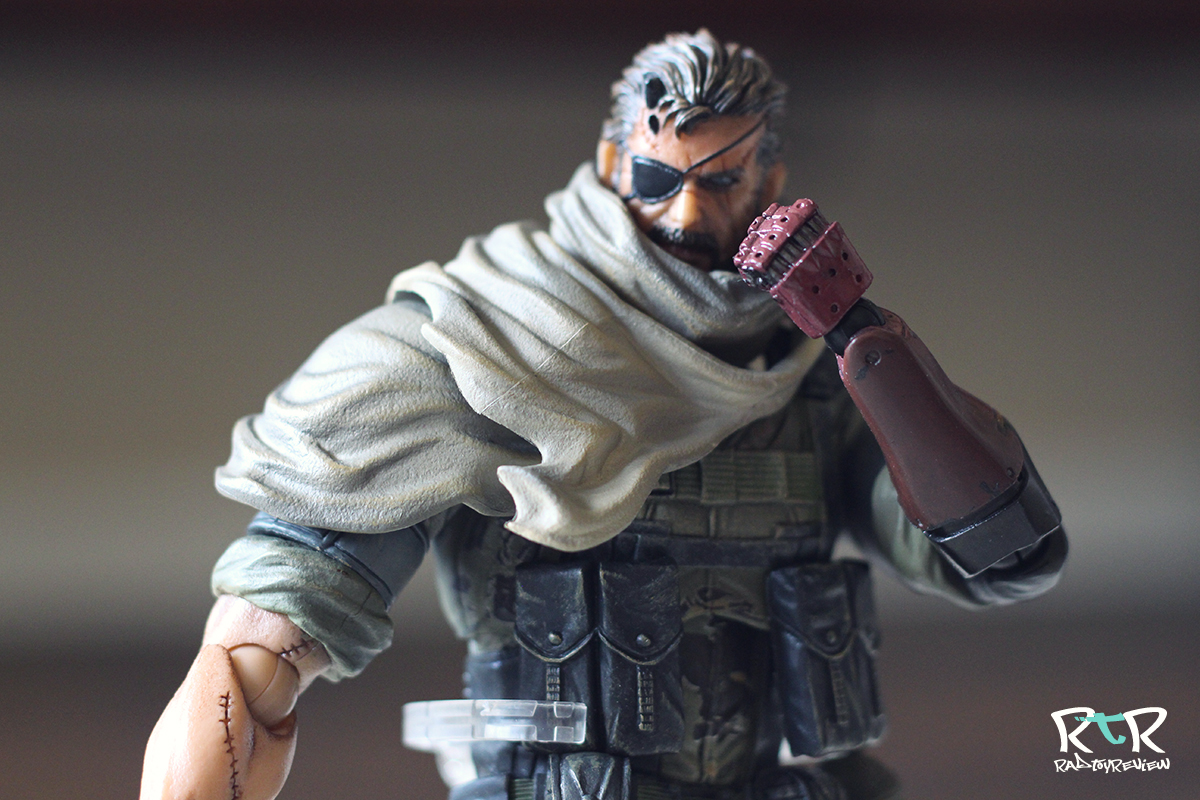 Along with his extra heads, you get a few extra regular hands as well. A fist and two “holding” or “trigger” type hands. Once again, the included instruction sheet illustrates that one hand is intended to hold his communicator, the other his guns.. but both work just as well for holding his weapons. Oddly, the communicator has a little trouble fitting well in either, despite that intention. 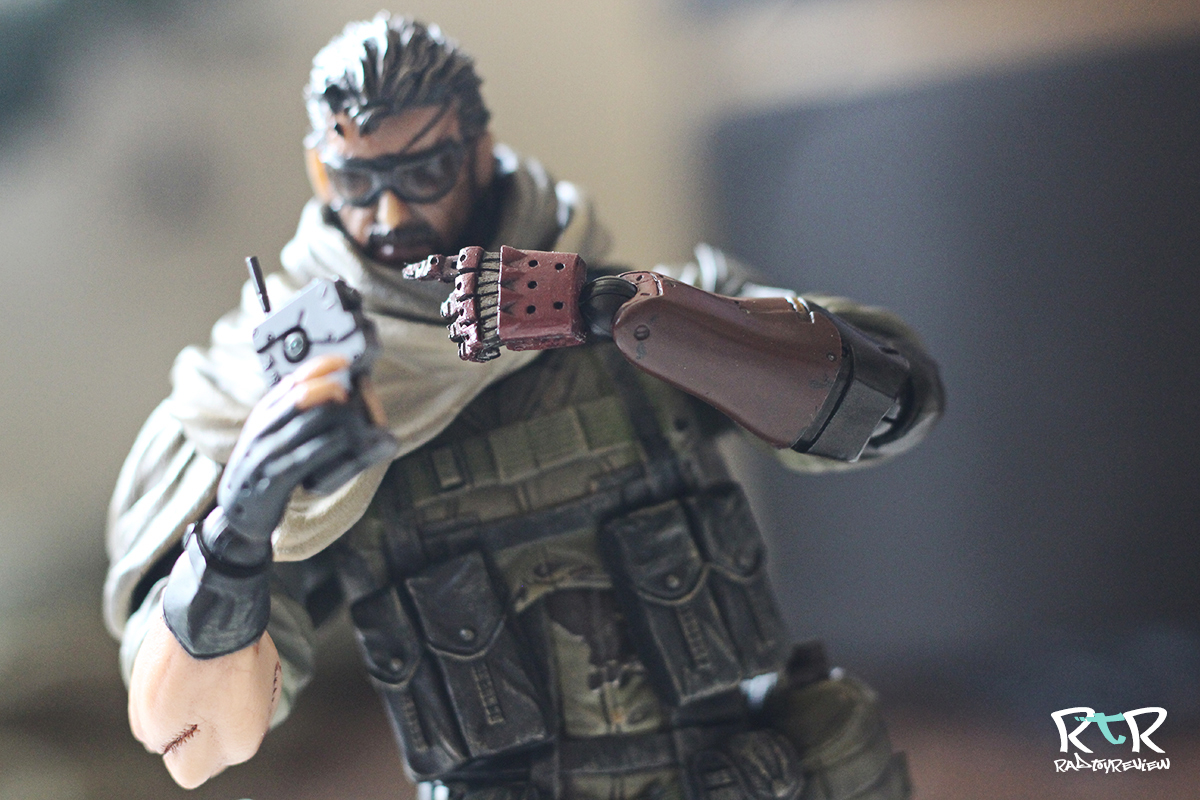 His robotic arm has a fairly glossy paint job on it which makes it read as metal against the other textures on the figure. Just like his other arm, he comes with 3 swappable robo-hands as well. A fist, a trigger/grip hand and a “cupped” hand. It could be used for other things, but I think the idea here is to hold the stock of his rifle. 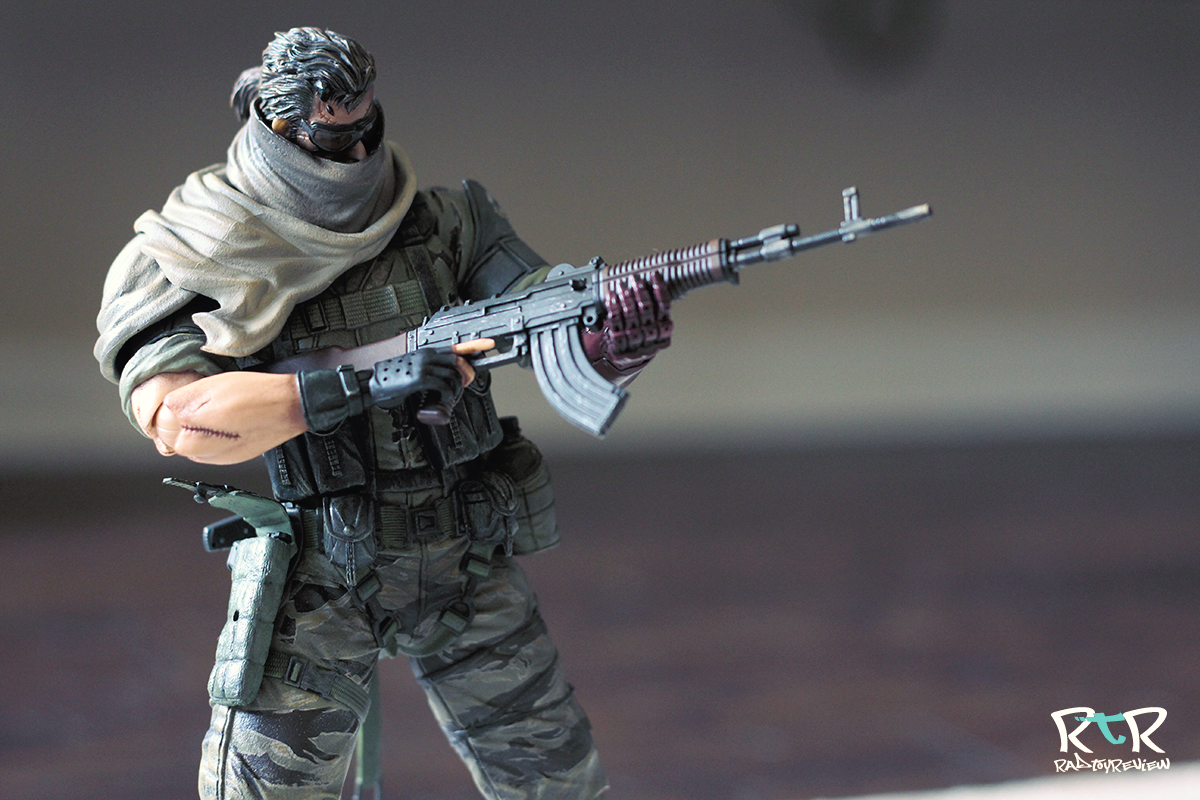 For weapons, he gets a pistol, a knife and what looks to me like an AK-47. All are nicely detailed and feature no bent or broken barrels! 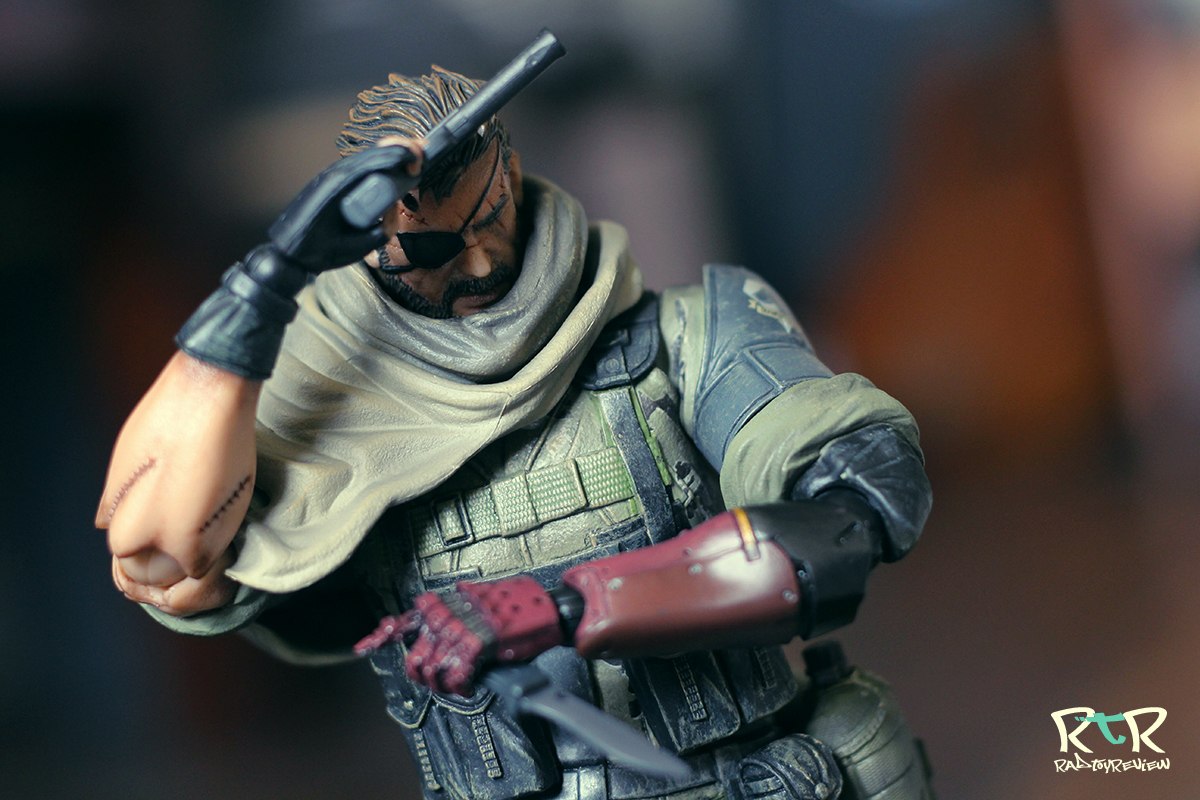 The rest of the sculpted details on Snake, the various packs, water bottles and holsters are all very well done as well. I dig the knife sheath on his lower back. 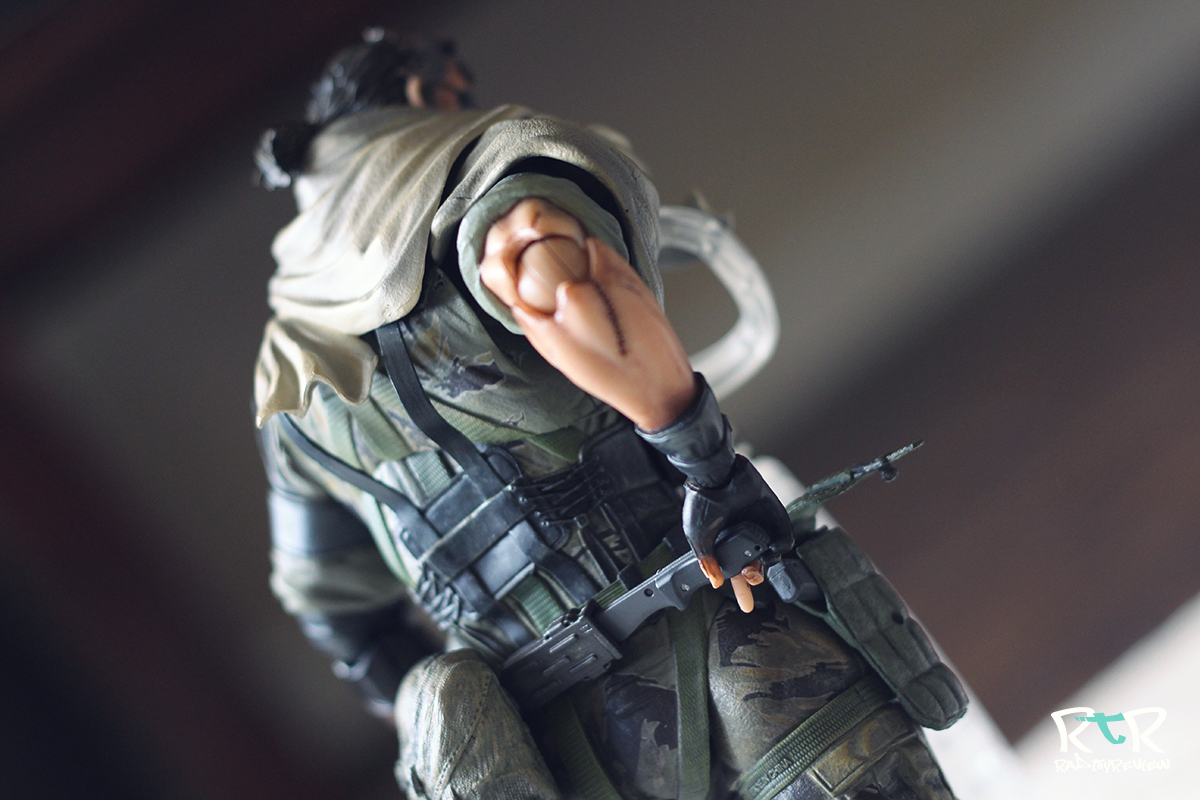 The articulation on Venom Snake is actually really good. For once, all the joints seem to behave as they should. In the past, my PAK figs alway seem to have one or three problem areas that I have to work around, be it a joint that’s not set right or a piece of gear getting in the way. The only thing I can see causing some people a headache would be the neck wrap, but with it’s cutaway segments, I didn’t have any issue. Other than that Snake doesn’t really feature a design choice that will inhibit whatever pose you want to put him in. 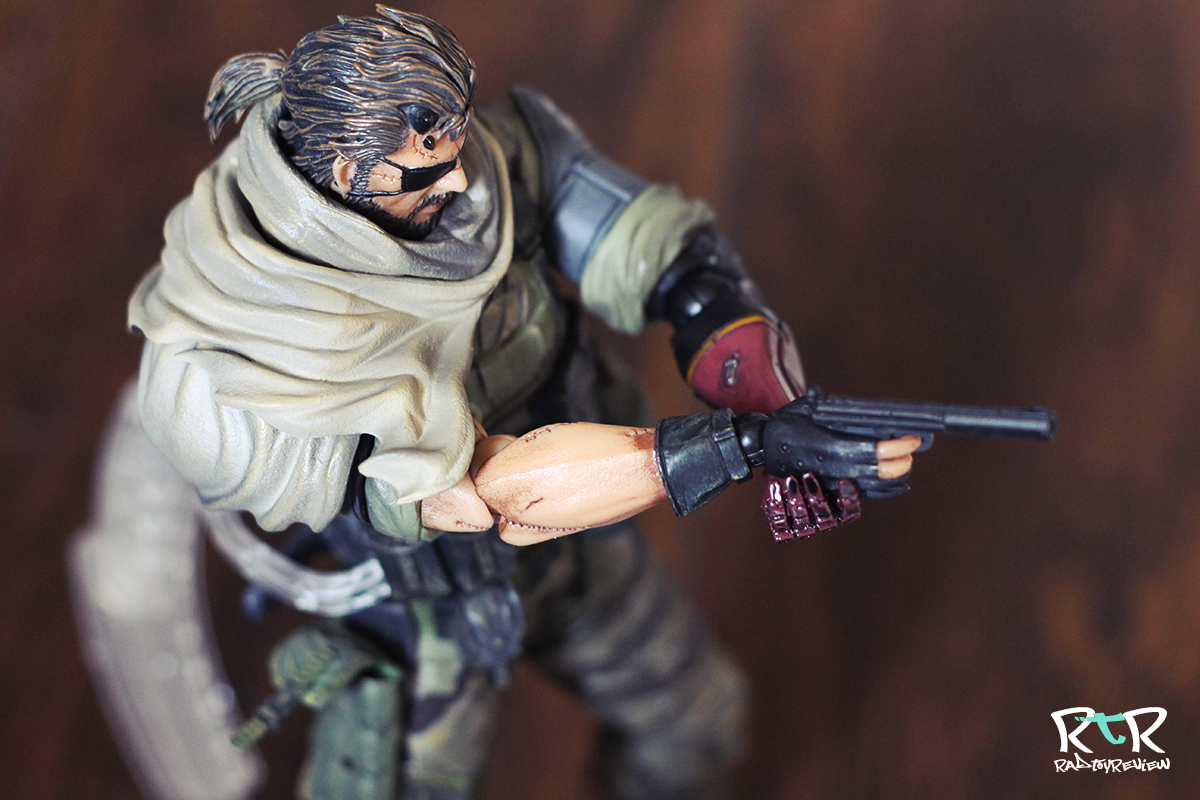 Like some of my other PAK figs, Snake comes with a clear plastic, adjustable stand. Which is pretty handy. That said, unlike most of my other PAK figs (I’m looking right at you Raiden) Snake doesn’t necessarily need it to stand up on his own. You might feel better if he’s up on a high shelf, but his joints and articulation is solid enough that you really shouldn’t have any issue getting him to balance securely. 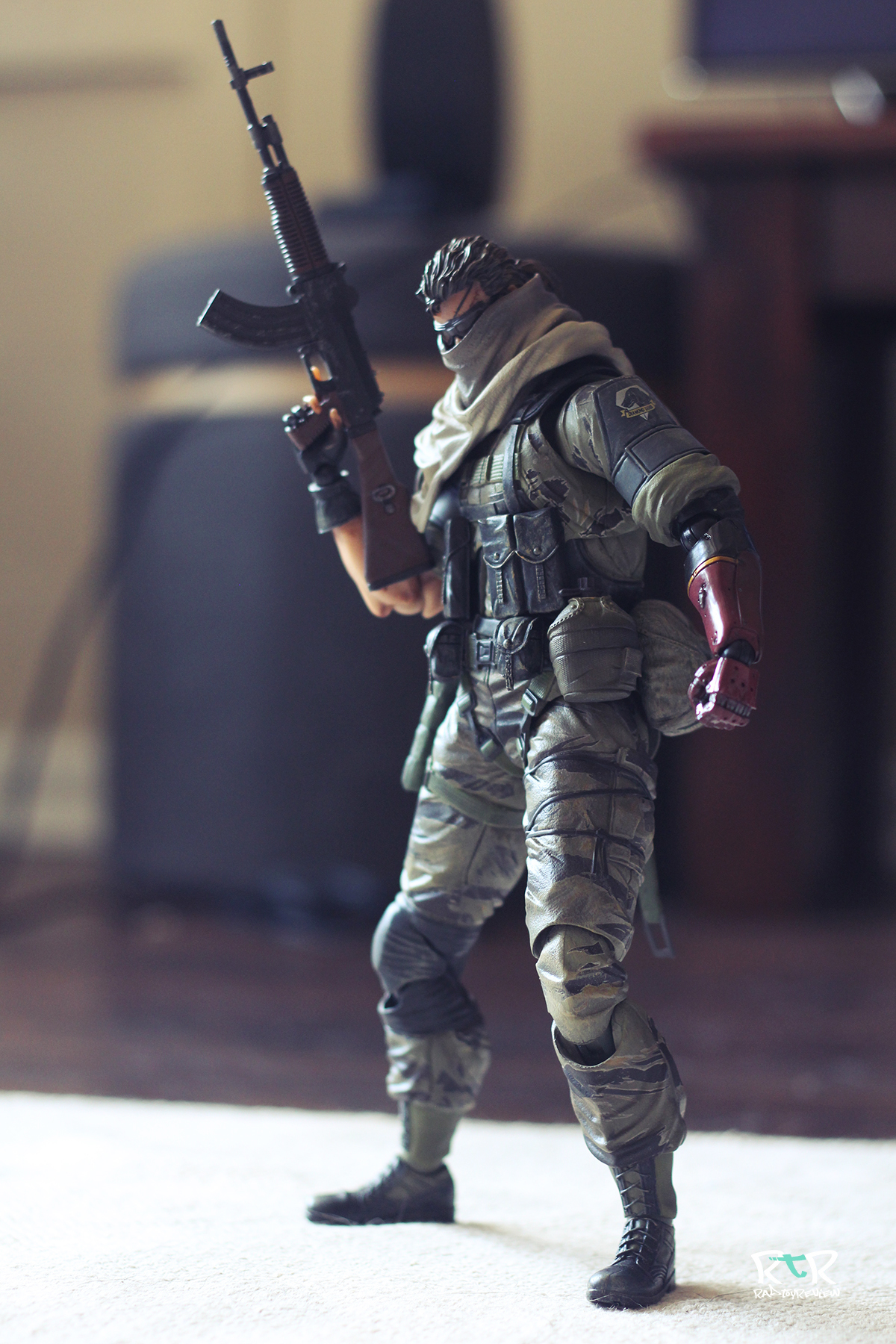 Is it me or do Play Arts Kai figures just keep getting bigger and heavier? Venom Snake just looks huge out of the packaging. When compared to my other PAK MGS figures, he’s about the same size. Pushing 11.5 inches tall, that’s nothing to sneeze at! While the size increase may be my perception, the price increase is not. I paid $65 a couple years ago for a PAK Metal Gear Solid Snake figure and you can’t find Venom Snake for less than $99 anywhere. In fact, most of the PAK figures I’ve looked at recently all come in around a 100 bones. Hopefully we can chalk that price hike up to better materials and QC, not just an increase in production costs. 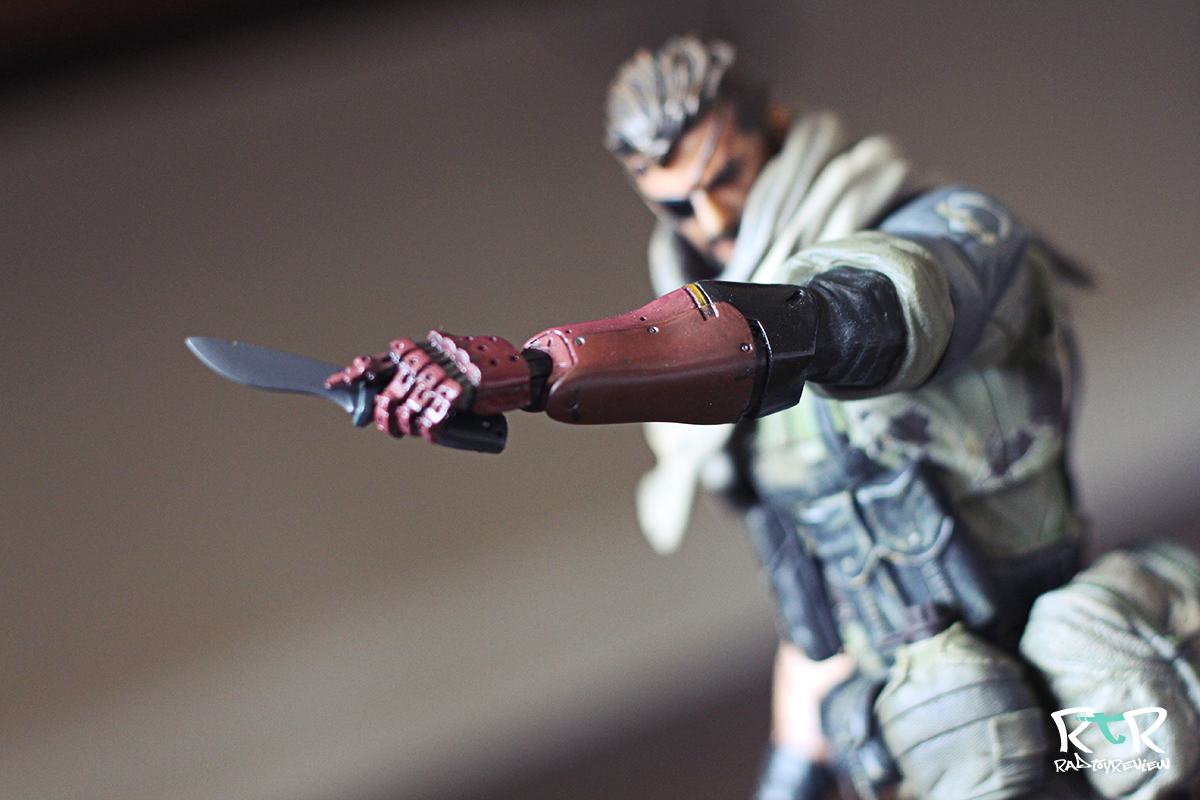 In this case, I would buy it if PAK said they were putting more time and money into their QC efforts as Venom Snake far surprises any of my previous PAK figs in that area, hands down. In fact, I only had a SINGLE issue with my figure. That darn rubbery flap on his holster. 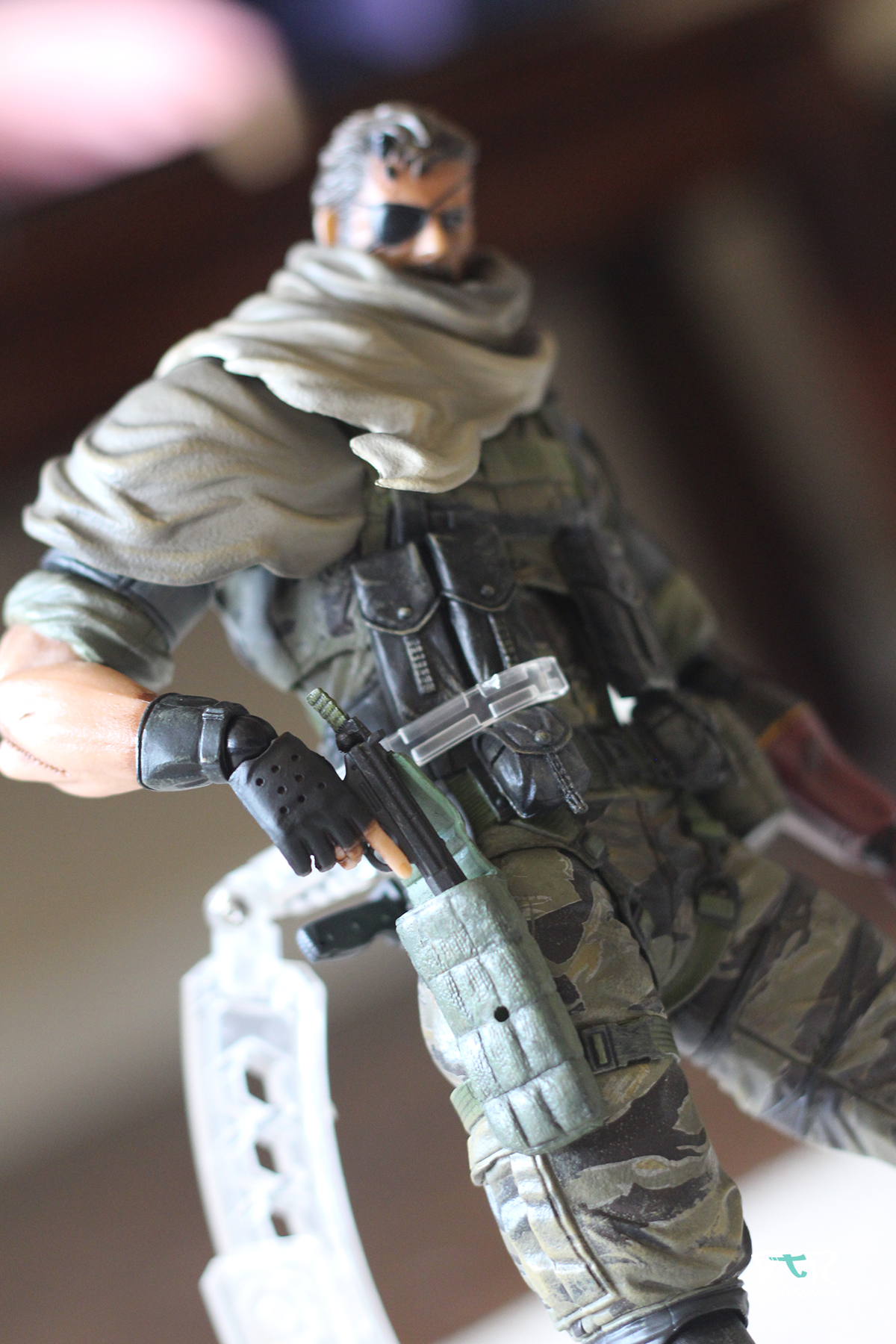 It came packed closed, but after opening it to holster the pistol, it’s nigh impossible to get the squishy, soft, rubber flap peg to insert into the squishy, soft, rubber holster. Infuriating even. I messed with it for 15 minutes trying to figure out a way to work it back together.. no dice. As such, Venom Snake will forever be displayed with the holster equivalent of having his fly down. 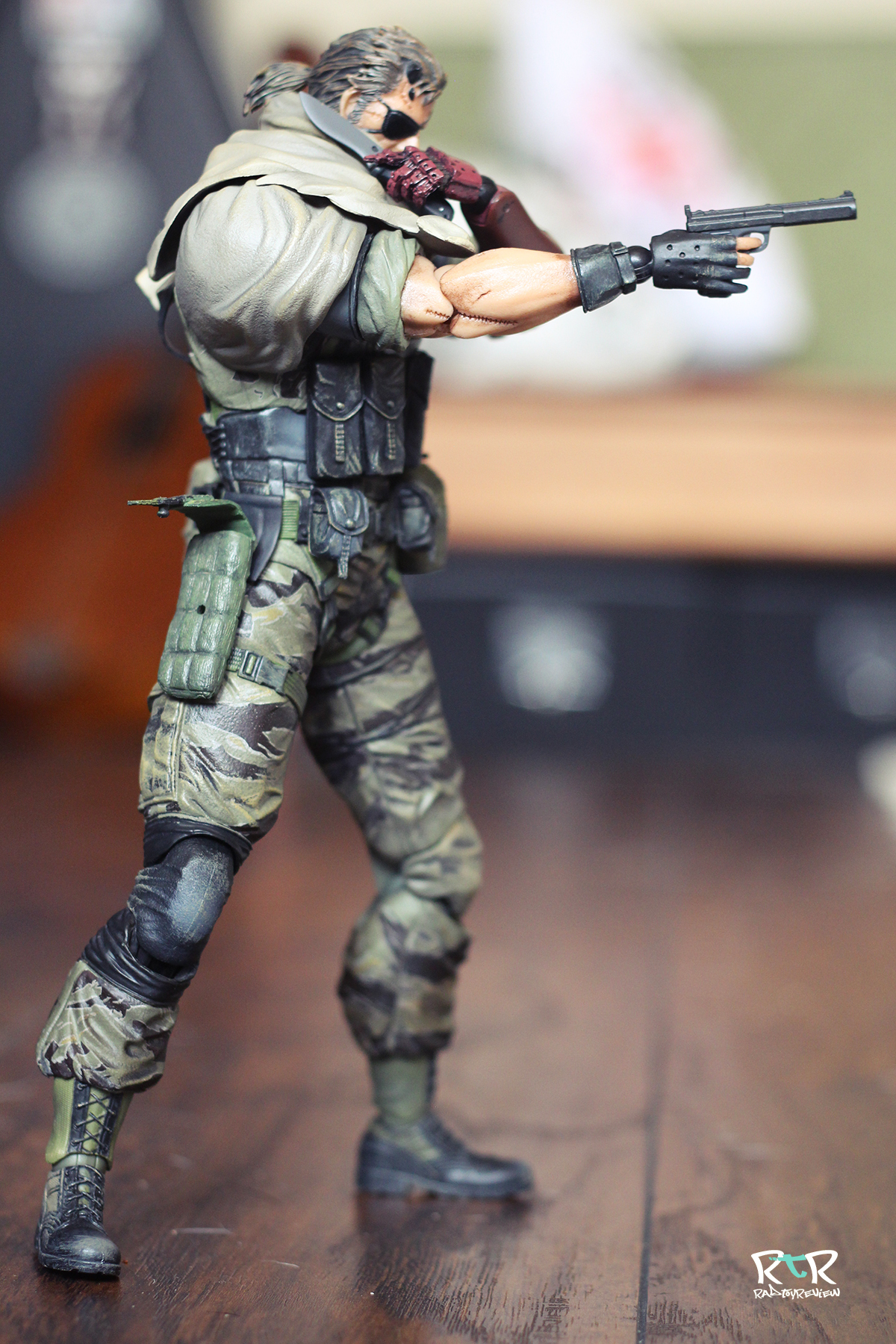 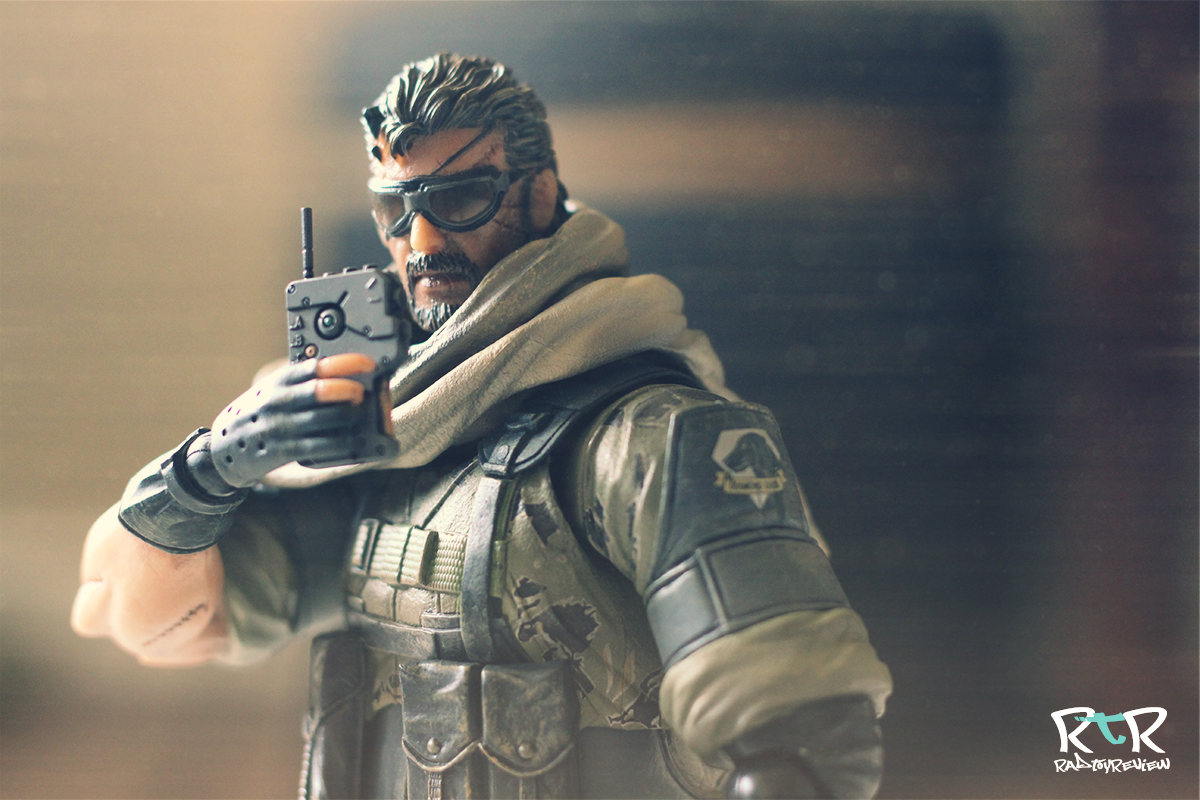 Venom Snake is awesome. He checks all the boxes of a very solid (heh) toy. He looks fantastic from the sculpt to the paint. You can pose him to your hearts content without feeling overly limited. The accessories, while not overly plentiful, are enough to have some fun with. Snake just feels all around well designed and executed.

The price/mass produced aspect of PAK figures generally keeps me from snapping them up very regularly, but I couldn’t resist Metal Gear. In fact, despite my ability to resist the Ground Zeros version of Venom Snake… I’m most likely going to hunt him down now that I’ve had a chance to play with this one. 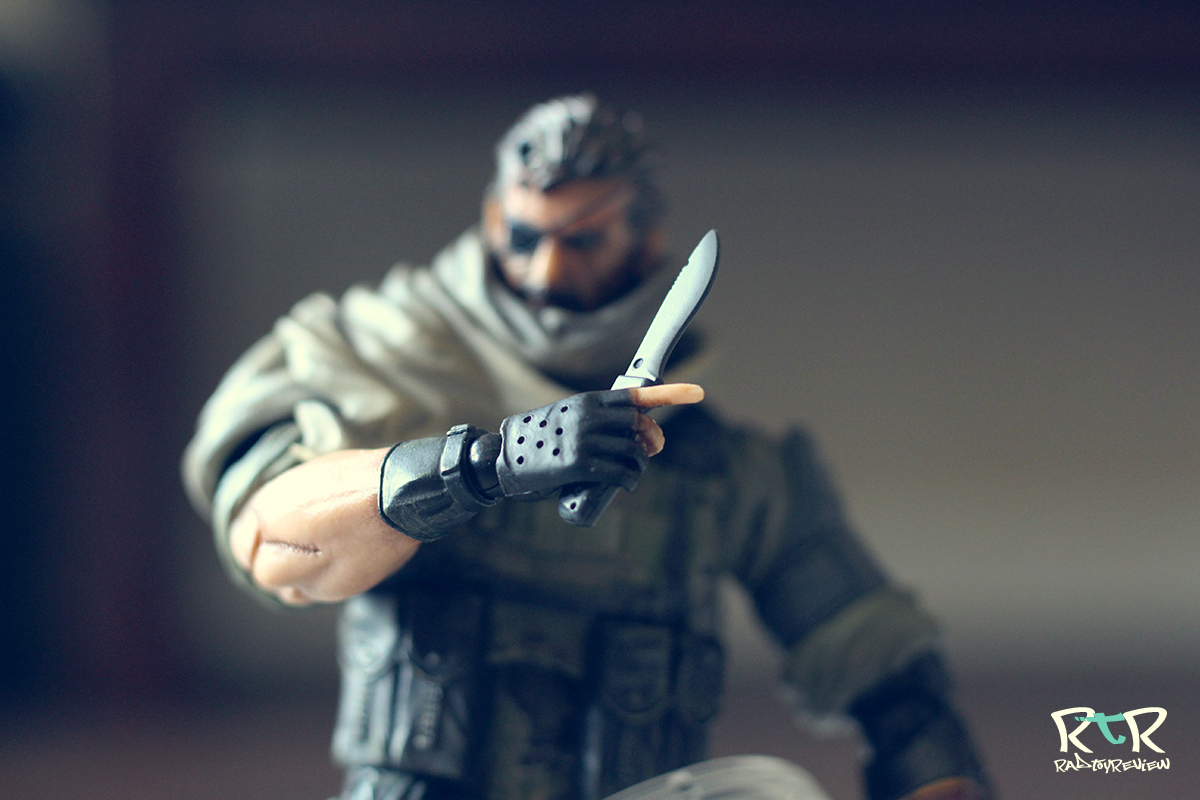 Play Arts Kai is one of my favorite booths at SDCC, they’re figures always look so fantastic! It never fails that I walk away from their booth wanting to win the lottery so I can eventually buy them all. The thing is, in the past, when I excitedly order one of their figures in the glow of the SDCC aftermath, what I end up getting is generally a little disappointing… at least for the money/a figure pushing $100. Enough that I sorta grit my teeth, wince with one eye closed and look away from the computer screen whenever I order something from them. It feels like a crap shoot with what I’ll end up with. 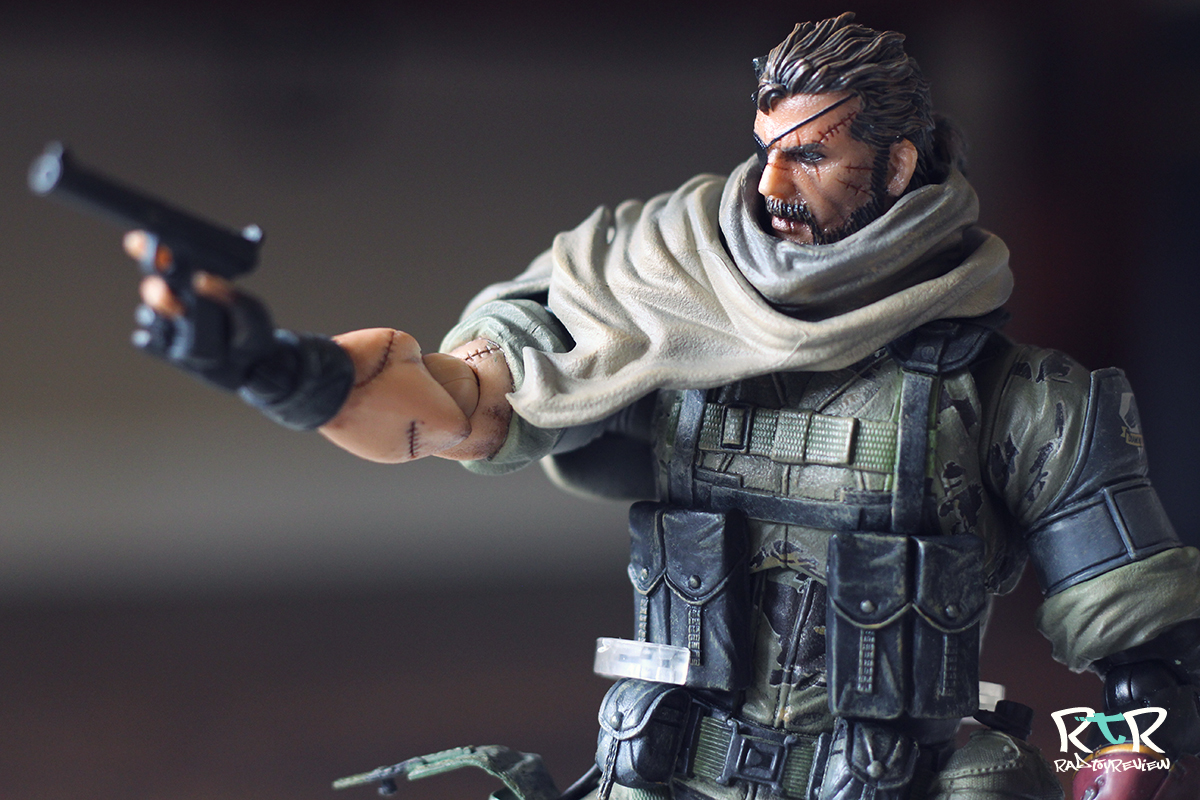 Well… by golly, you’ve done it Play Arts Kai! With Venom Snake, you’ve taken another big step in restoring my faith in your toys!

Metal Gear Solid V is a sick license for PAK to have, and they have truly done it justice with this figure. Here’s hoping that trend will continue with the rest of the line. 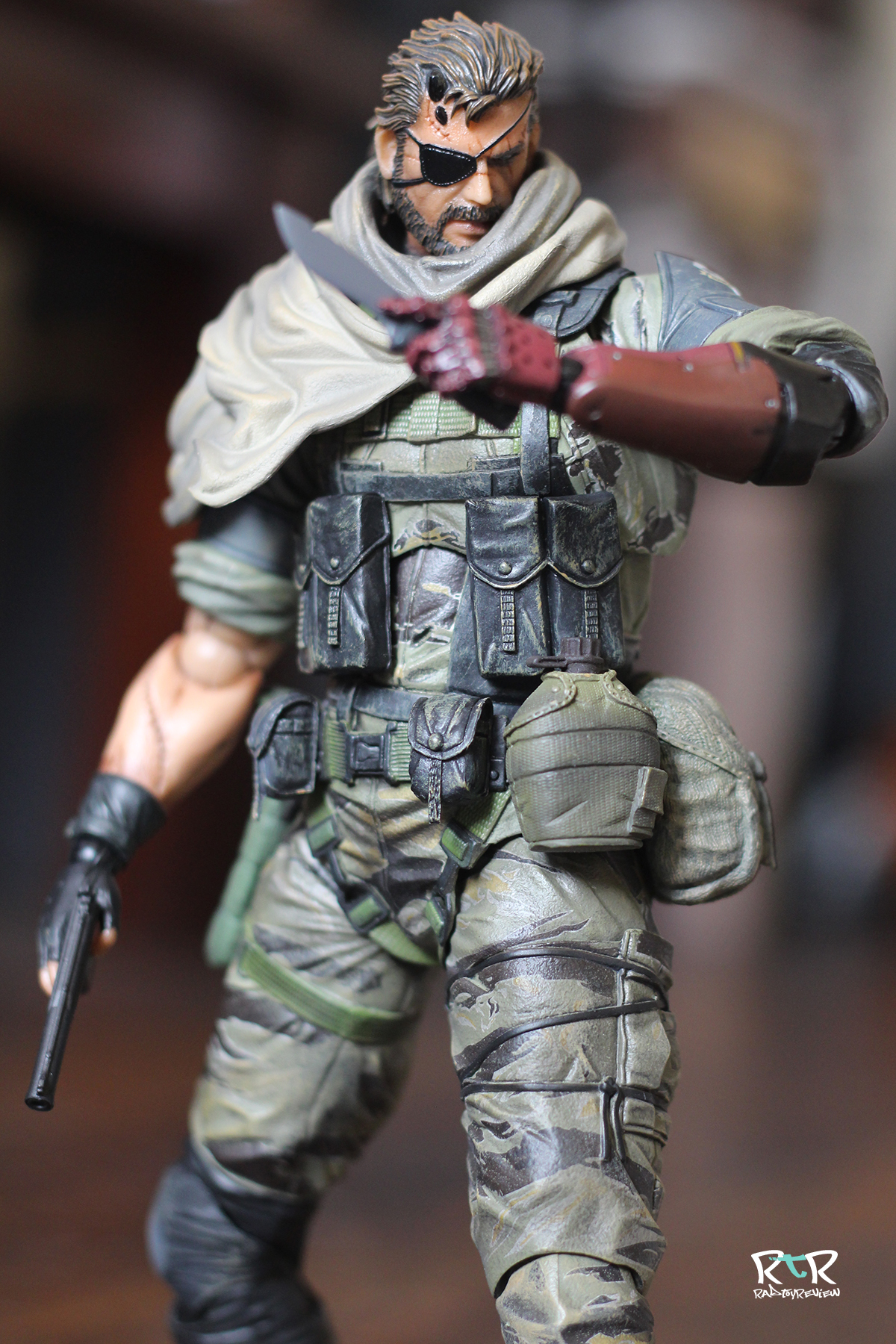