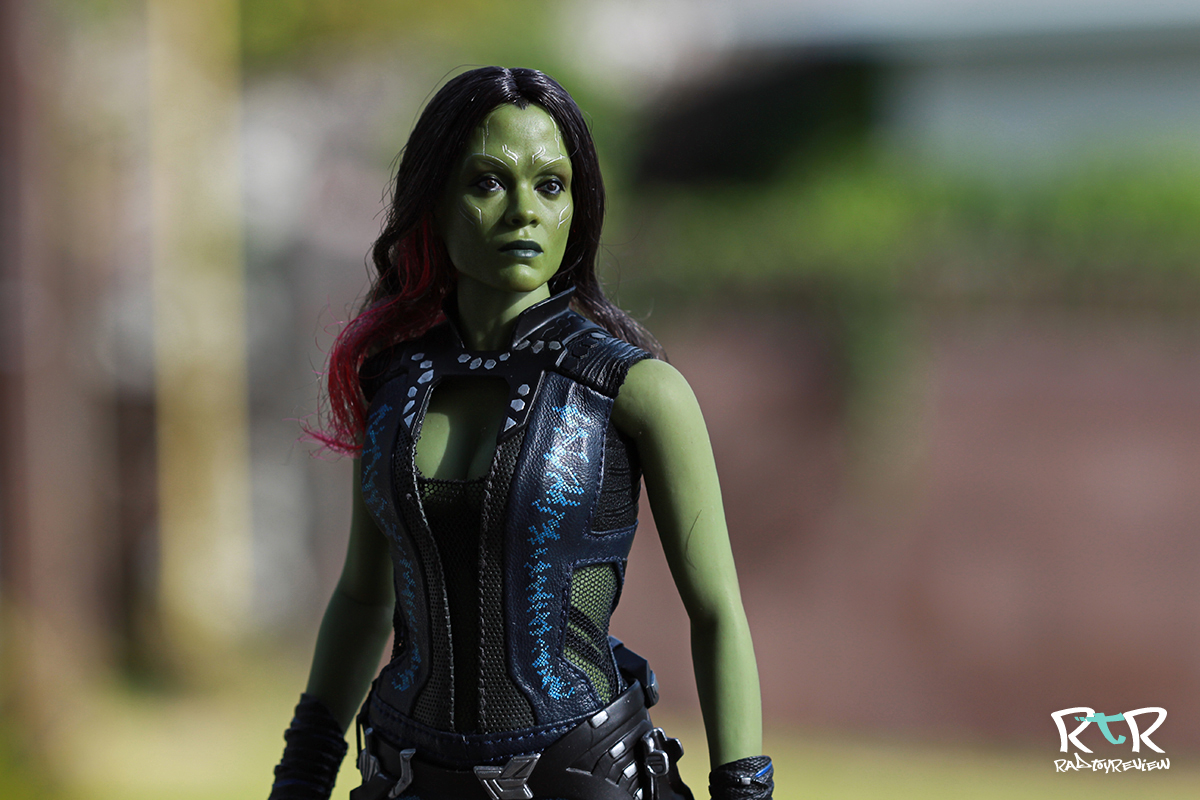 Just as I finished unpacking the last toy in my office after our move, Gamora lands on my doorstep. I’ve been looking forward to having her in my collection since I first spotted her on display at Sideshow’s booth, last year during San Diego Comic Con. So much so that I tossed money at the screen as soon as she went up for pre-order.

Plunking down a not insignificant amount of cash for any collectible can leave one nerve racked as the ship date approaches. Will it be as awesome as it looked from the previews? Will the paint be as good as it did on the prototype? How are the accessories? What about QC?
Ah… what about QC indeed. The questions can go on and on.

As collectors, we tend to have certain expectations when it comes to these high dollar, luxury items. We expect a certain level of quality. That said, there’s also a good amount of consideration of expected limitations of any given item depending on how the item was produced, what features it may employ, new tech, etc… We can be at the same time incredibly nit-picky as well as a very reasonable bunch.
However, every once in awhile, even with all those things set up and limitations of a figure considered, a collectible comes along that just… baffles us.

But I’m getting ahead of myself. Lets get on with the review, and you can decide exactly how this all applies to Hot Toys Gamora. 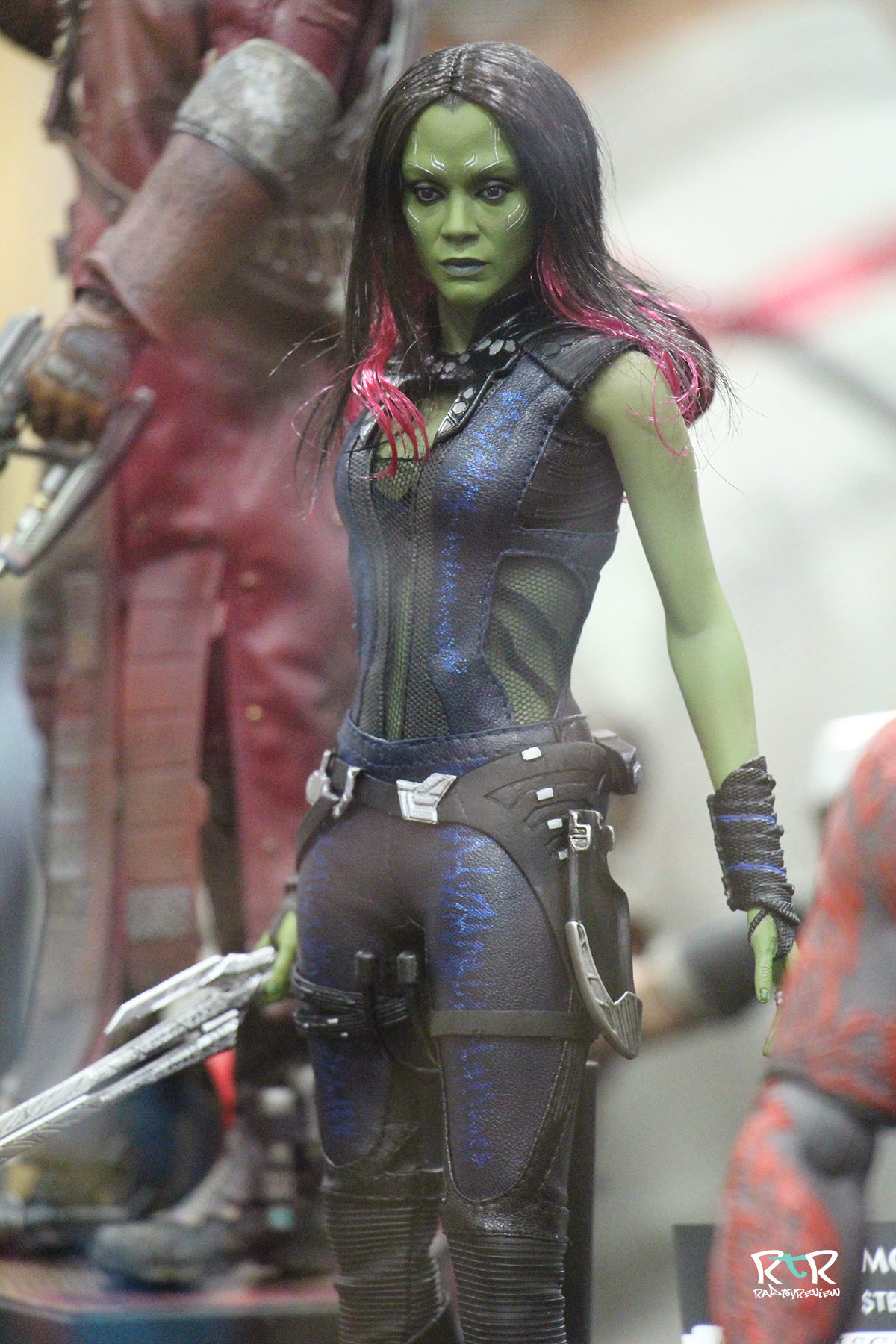 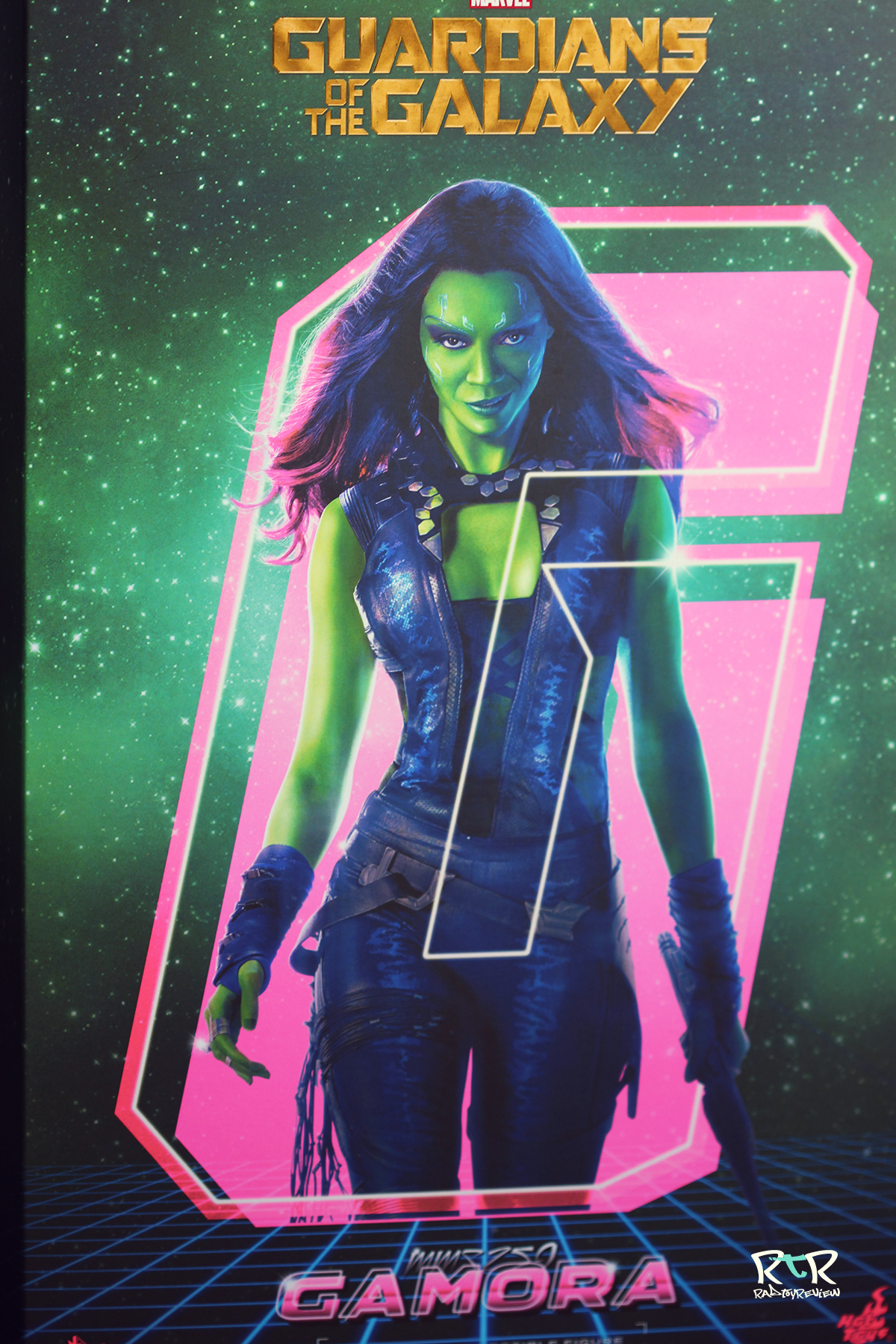 Now my buddy Brent will probably give me some crap for saying this but, I actually like the packaging Hot Toys put together for Gamora. I wasn’t blown away by Starlord’s box and Gamora’s shares similar design aspects but, something about that bright pink and green just looks so right! All accompanied by her looking right at you with that sexy, confident sneer.. it’s very 80’s.. very neon. I can totally get behind that. 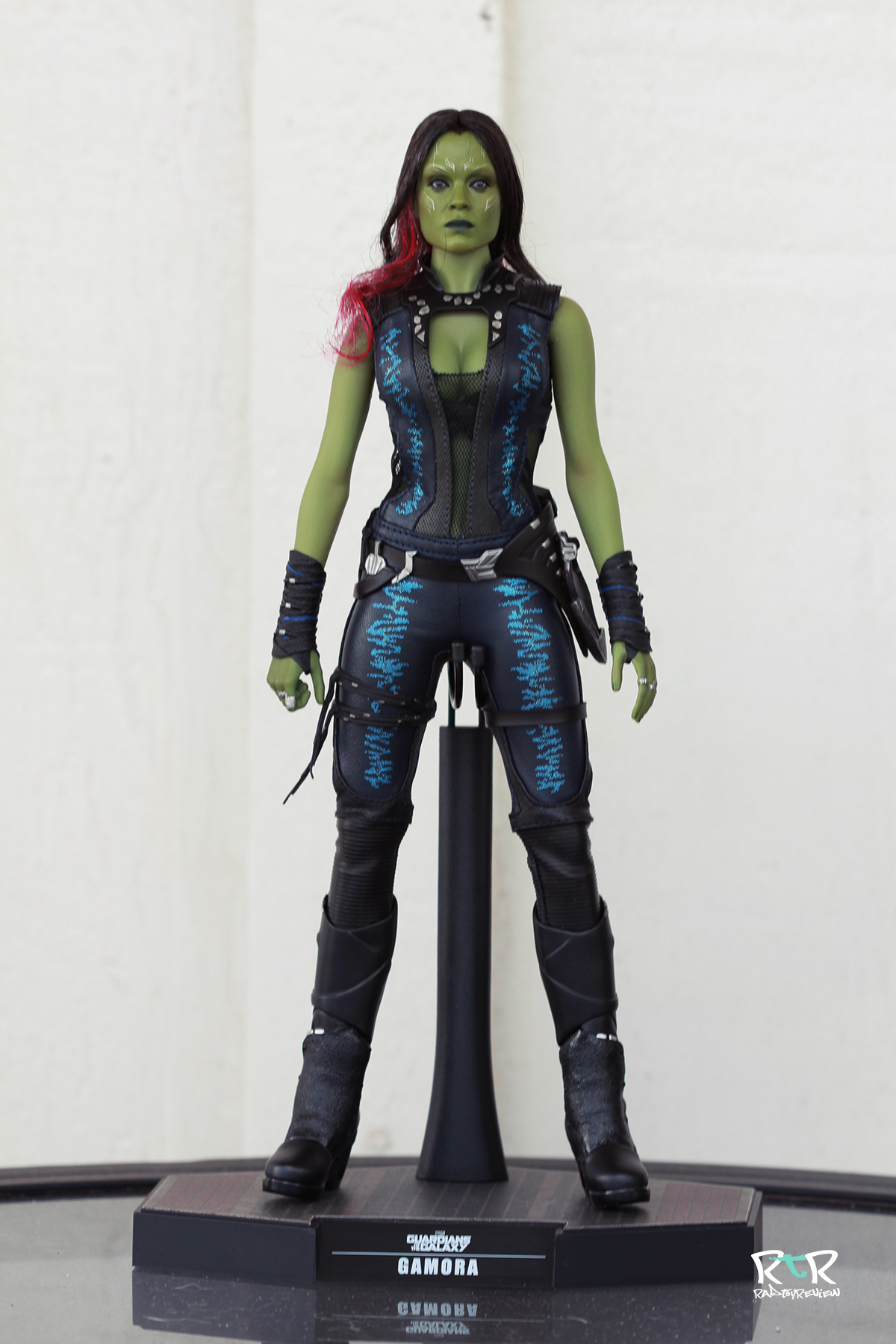 Now Gamora is my first female figure from Hot Toys.. I’ve been tempted many times to pick up Black Widow because: Scarlett Johansson.. and might still do so at some point… but so far, I’ve done a decent job of protecting my wallet.
Suffice to say, I was pretty excited to see how Hot Toys handles their females. 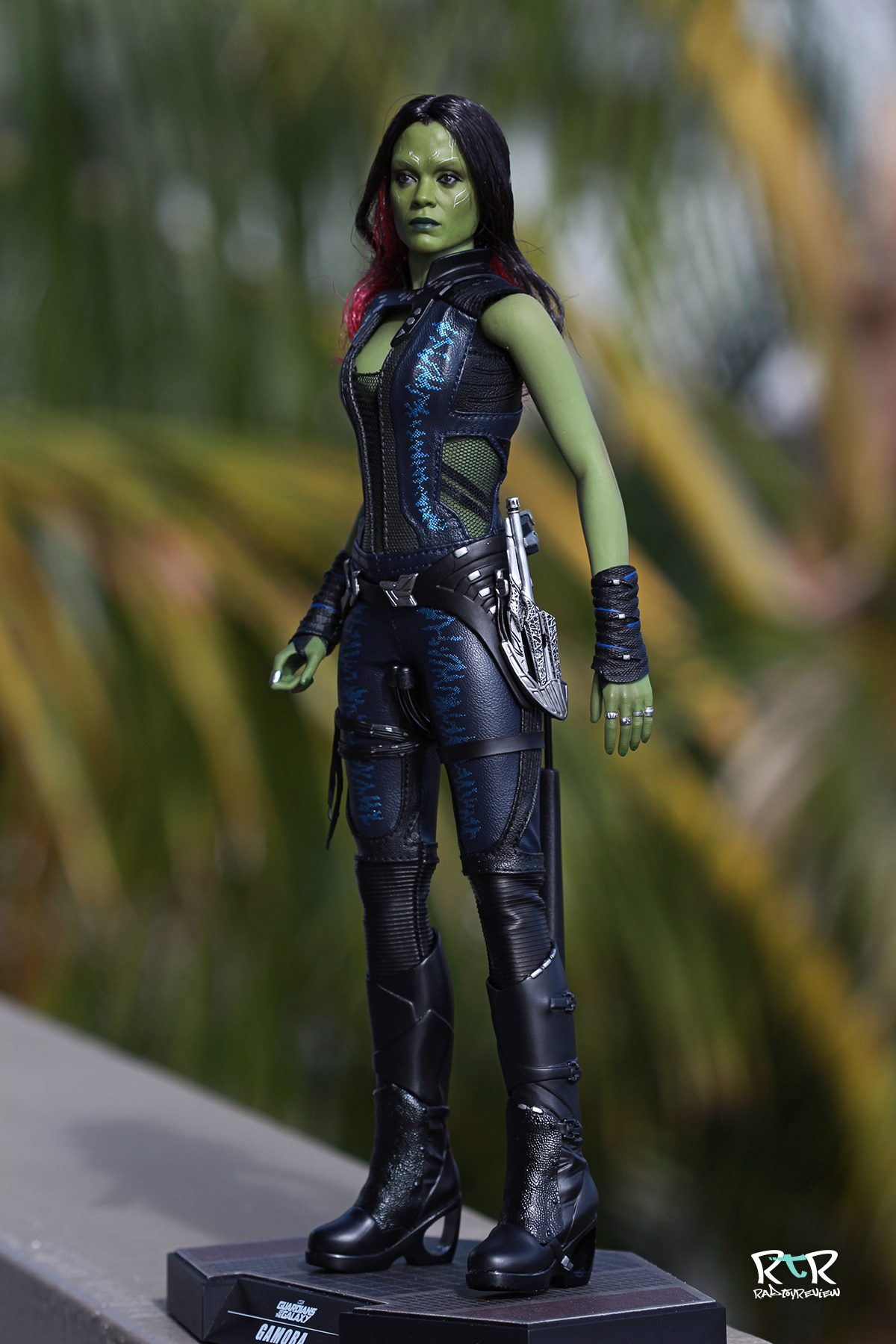 Starting with the face sculpt. It’s certainly not the sly, sneering, devilish looking face from the cover art but, it’s a really nice.. really beautiful sculpt. While it’s just slightly off the mark of being a perfect Zoe portrait, it’s incredibly close. I love the little painted silver details, etched slightly into her skin. I just wish that there was a flicker of “something” there. It’s just so neutral and lacking any emotion. A blank slate. 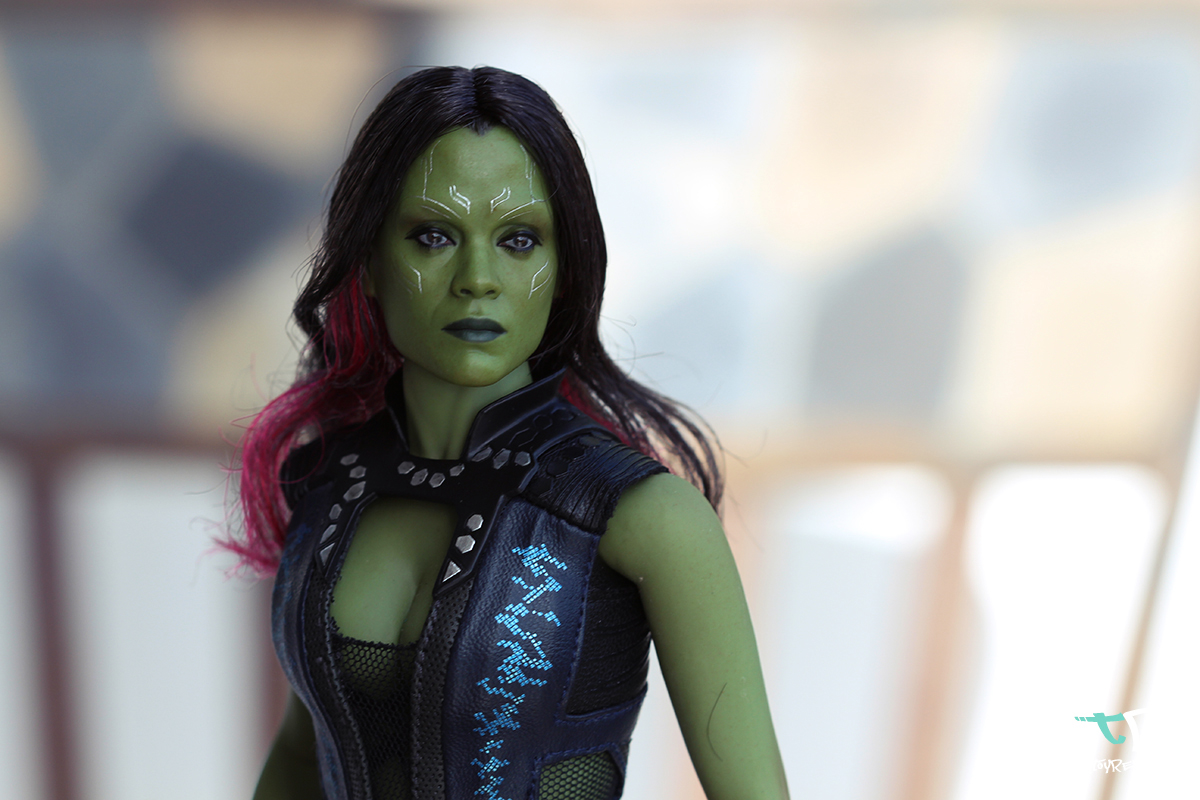 While Starlord is sporting the faintest of smirk.. they gave Gamora nothing to work with. She kinda looks like she just woke up, is sipping a cup of coffee and thinking about how she’s absolutely dreading going into the office for the day. A day filled with processing invoices and filing paperwork, no doubt.
“Ugh.. I hate Mondays.” 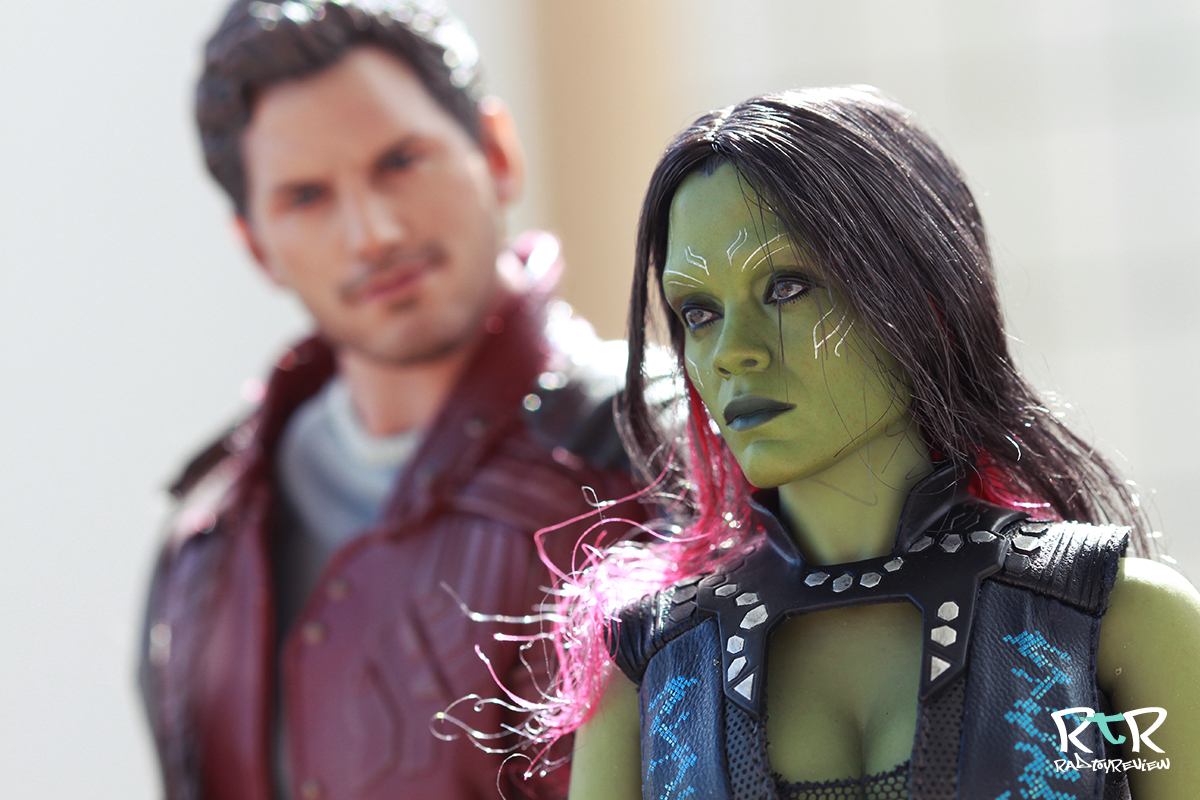 Given the very limited amount of accessories (I’ll get to that in a bit) an extra head sculpt with an optional look would have been nice. There’s certainly room in the box for one! Again, the illustration on the box shows her with this great mischievous grin that’d been perfect! It would have added some much needed character to an otherwise emotionless figure. 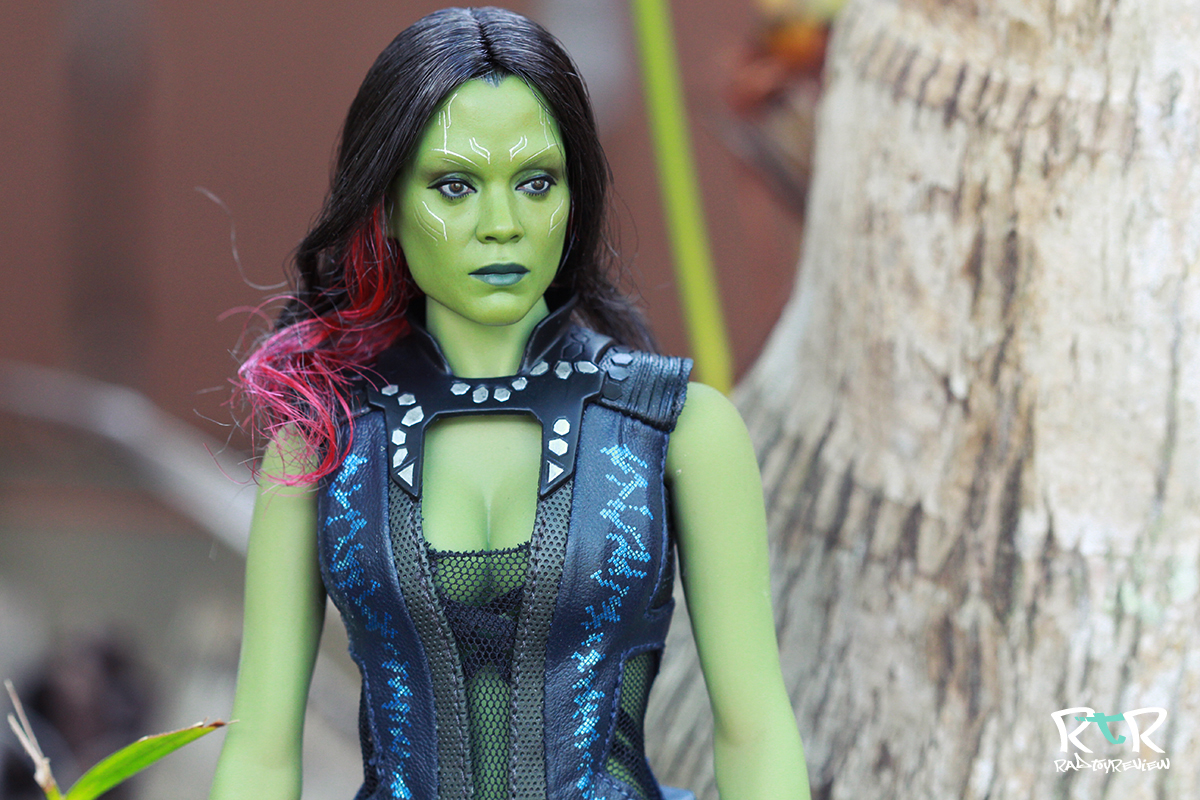 I’ve heard a LOT of complaints about the hair and while it’s a little more fussy to deal with than had it been sculpted on, I have to be honest.. I don’t hate it. Sure, right off the bat it places her a little closer to doll territory than some collectors are comfortable with.. but I don’t think it’s the worse feature ever. It was laying down smoothly enough out of the box for me, and at least for now.. looks decently styled. 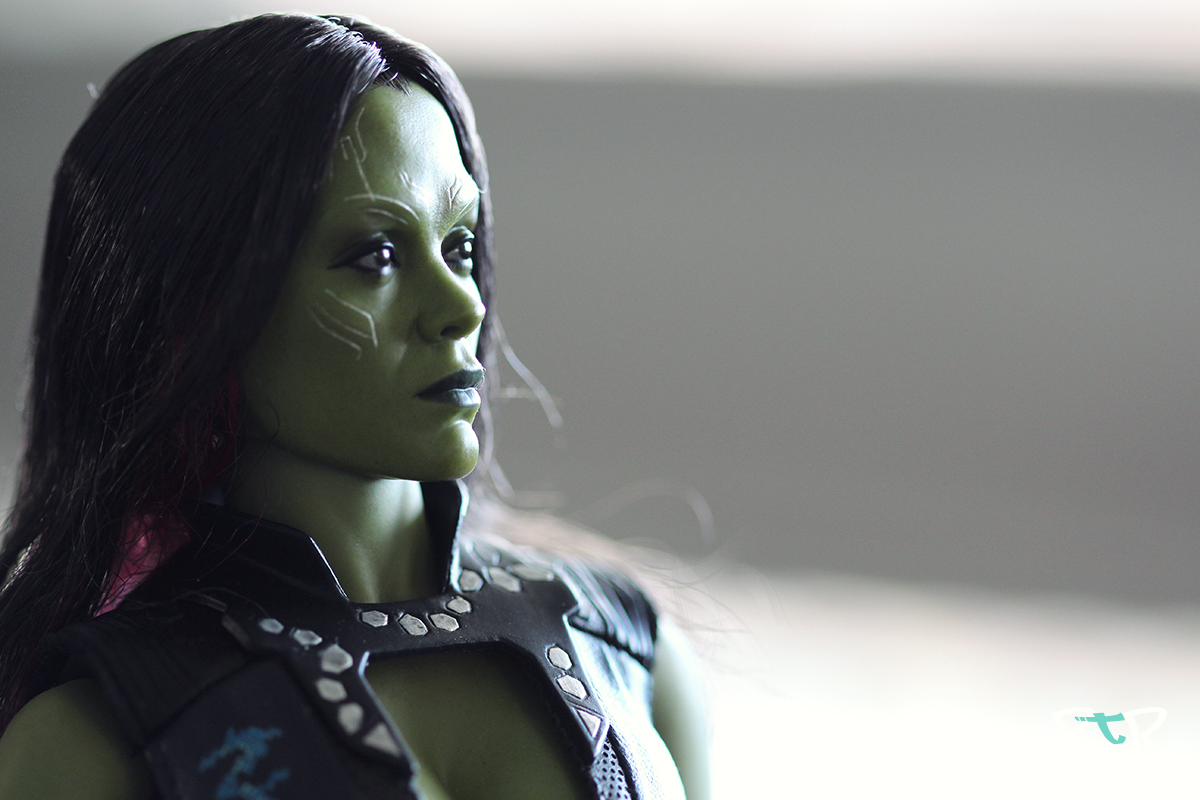 The tiniest bit of sculpted hair at the top of her forehead is noticeable and can look a little odd if you focus on it too long.. but, it serves to bridge the area between her forehead and scalp and does so pretty well. 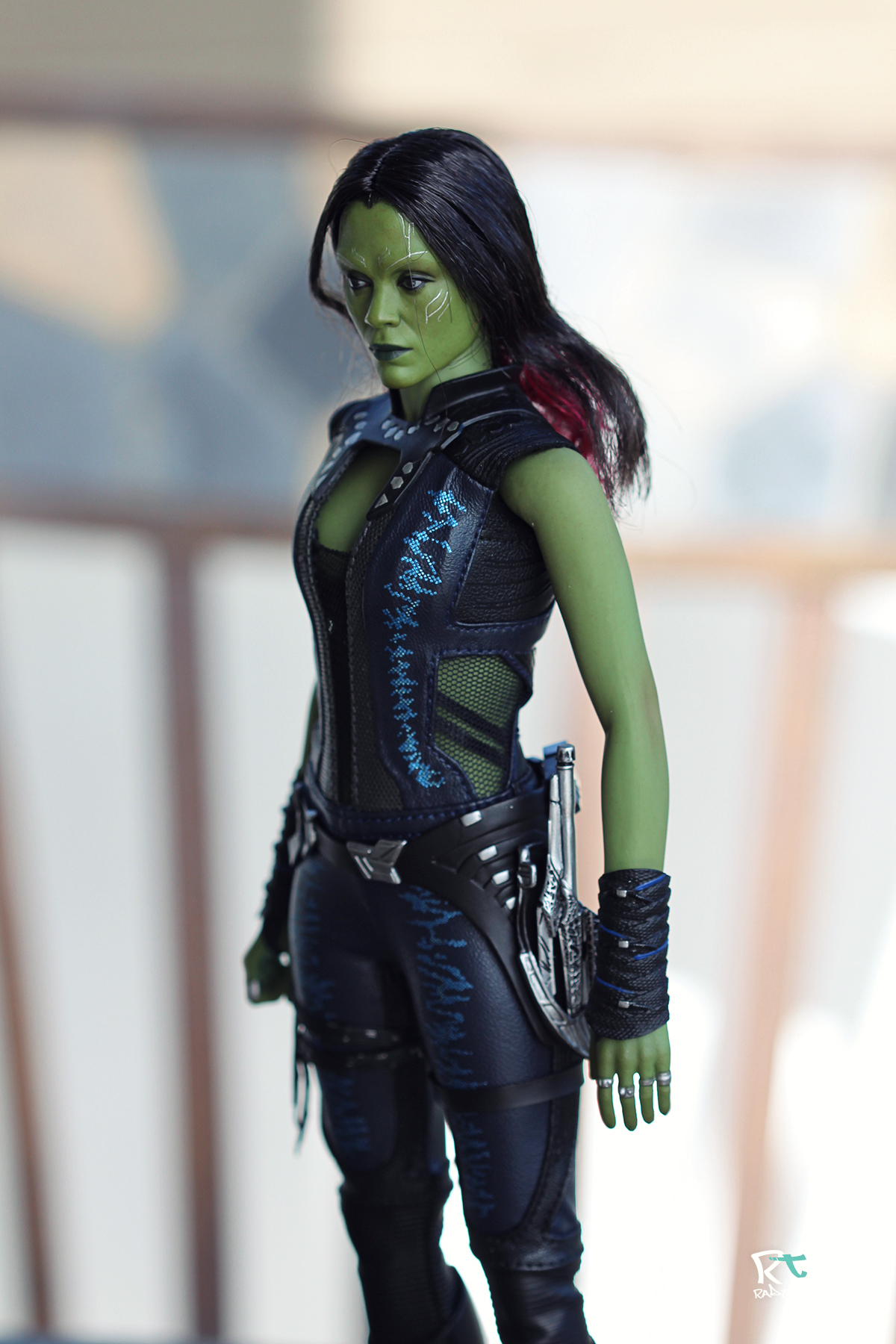 Hot Toys gave Gamora rubber-like “skin”.. so as you can see, her arms are seamless.. which looks pretty nice at first, at least in a relaxed pose. Things start to look a little odd when you bend her arm too much, particularly since it lacks the natural “point” of an elbow. 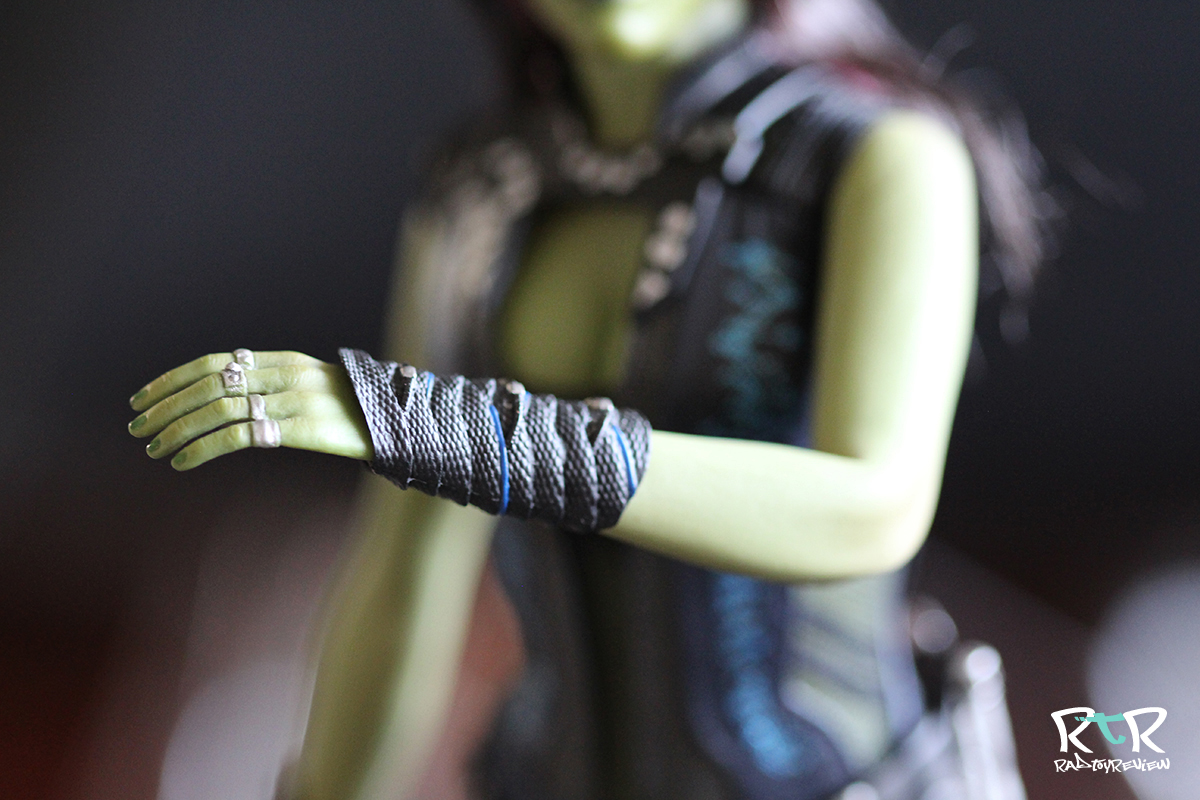 The only other figure I have in my collection that sports the seamless skin look is ThreeA’s Lasstranaught from their 2014 membership pack. The feel is essentially the same, though (surprisingly) Lassy’s QC seems to be a few steps better. Unfortunately for me, there’s an obvious seam running down the shoulder/bicep area of Gamora that I didn’t notice until I started taking these photos… that now I can’t unsee. 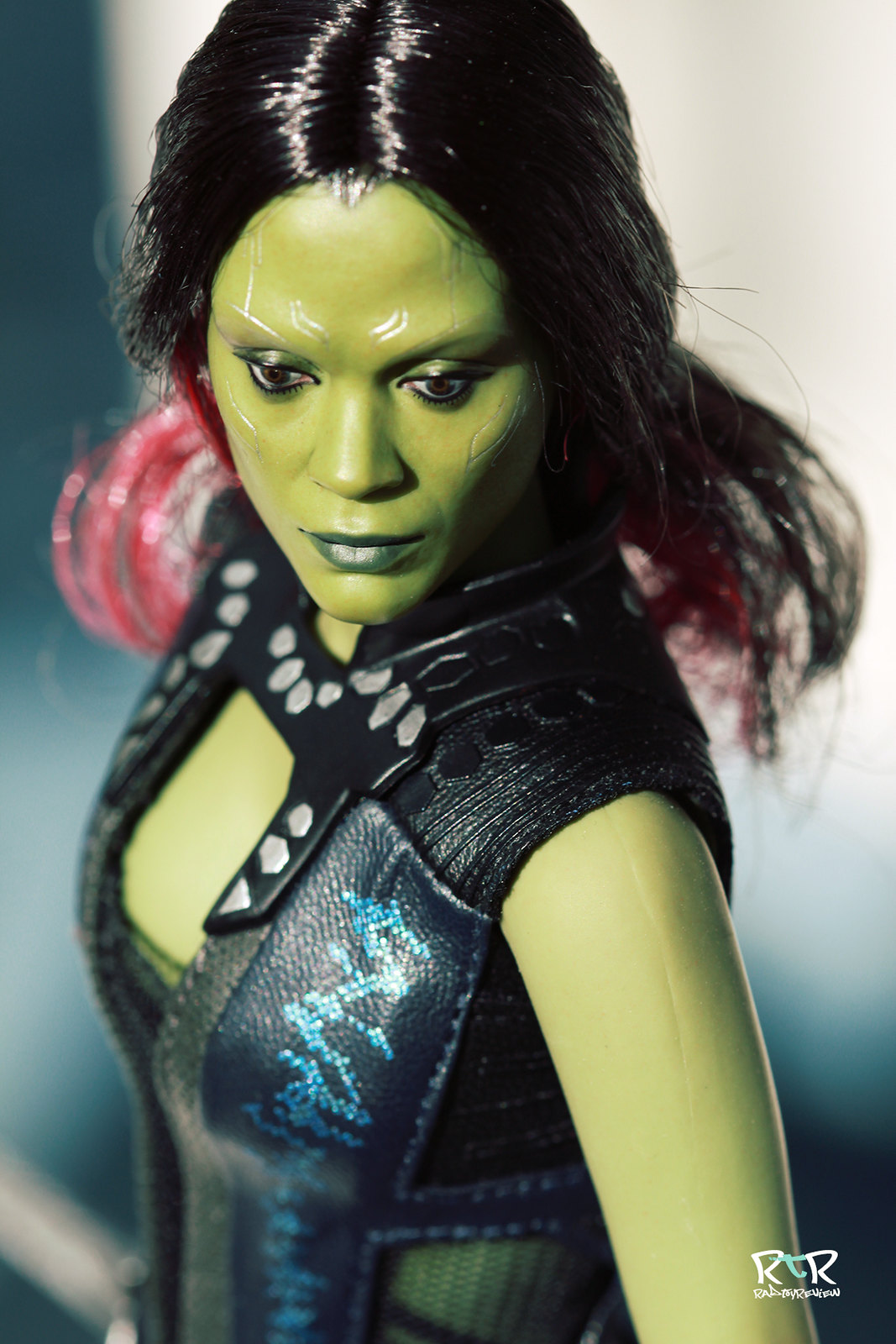 Her torso skin is also just the slightest shade lighter than her face, which once again, I didn’t notice until I started taking photos outside in natural light. Once again, never to unsee.

Not all is bleak. Her outfit looks outstanding. It’s got some very nice painted blue and silver details throughout and molded plastic elements around her neckline and hips. 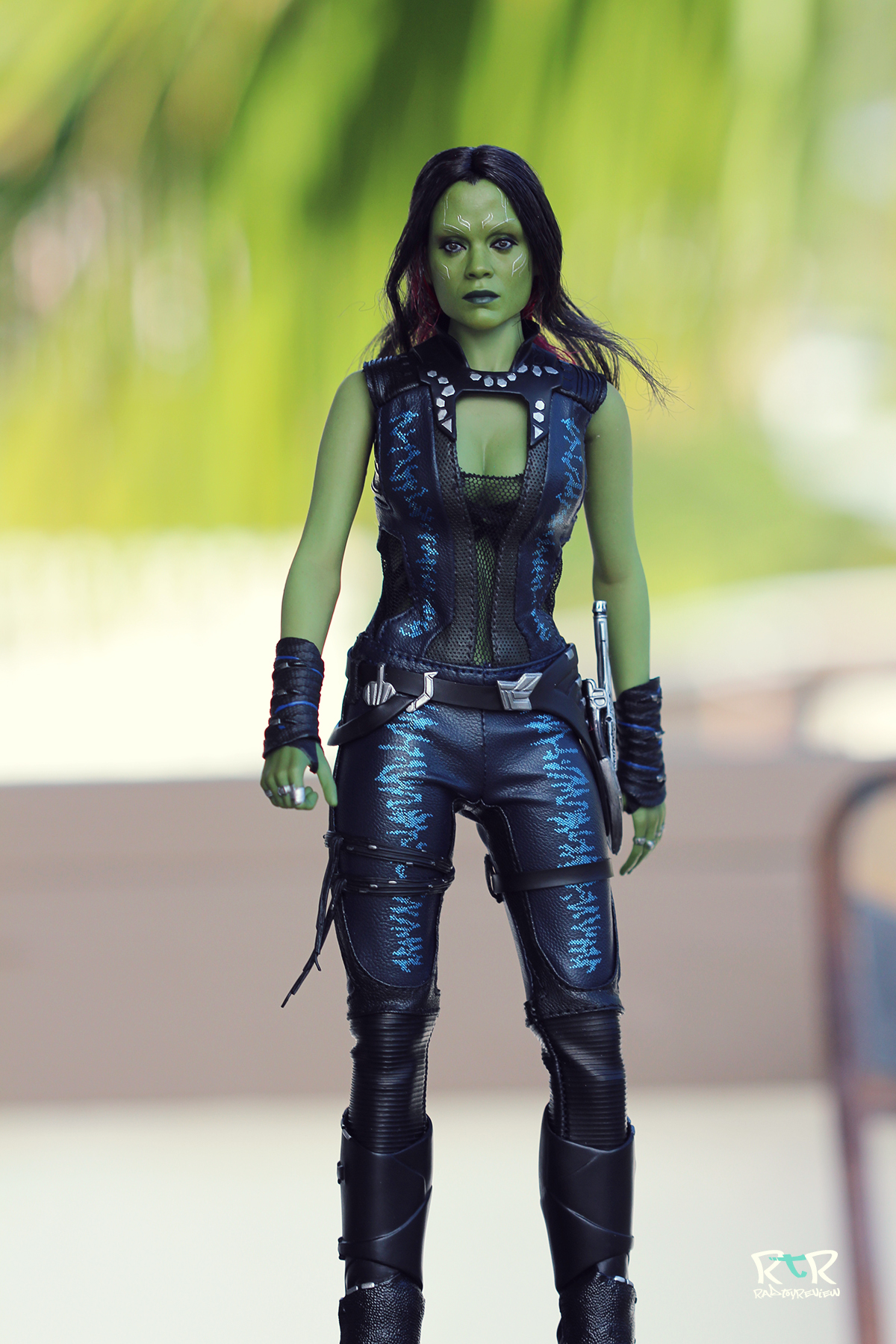 There’s a hint of saggy crotch which is particularly noticeable from the back, but it’s not too bad. I do have to wonder, if we can have perfectly round rubbery busts with (in this case a little TOO much) perfect cleavage on the female figures, why can’t that same sort of technique be put to use in other areas?
Don’t toy makers know, “dancing is all about butts now!”? 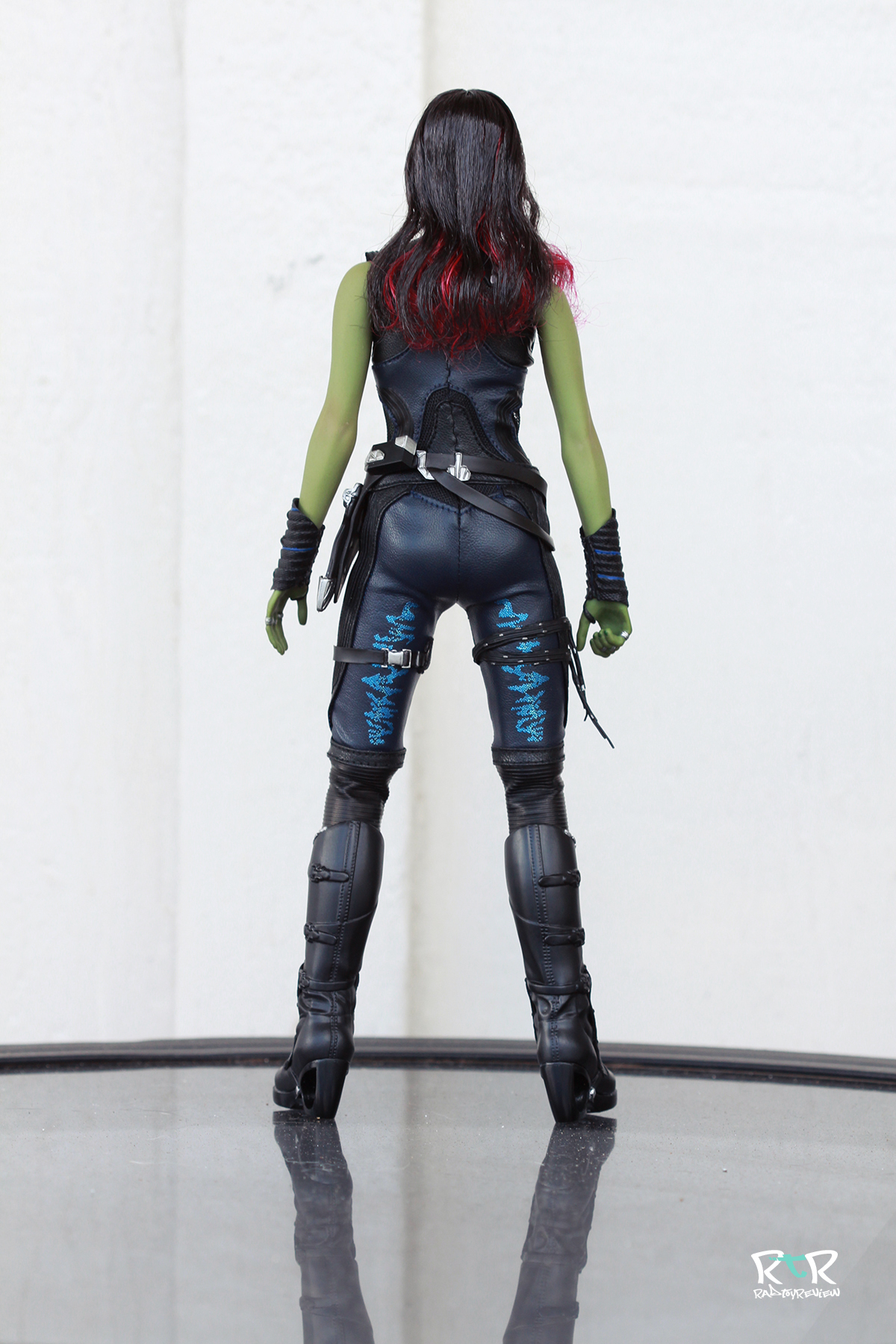 I’d say that overall, Hot Toys has done a great job on the tailoring of her outfit. The material has some give to it as well, so it’s not too difficult to pose her, though I can’t speak for it’s durability or suggest anyone try pushing it to extremes. 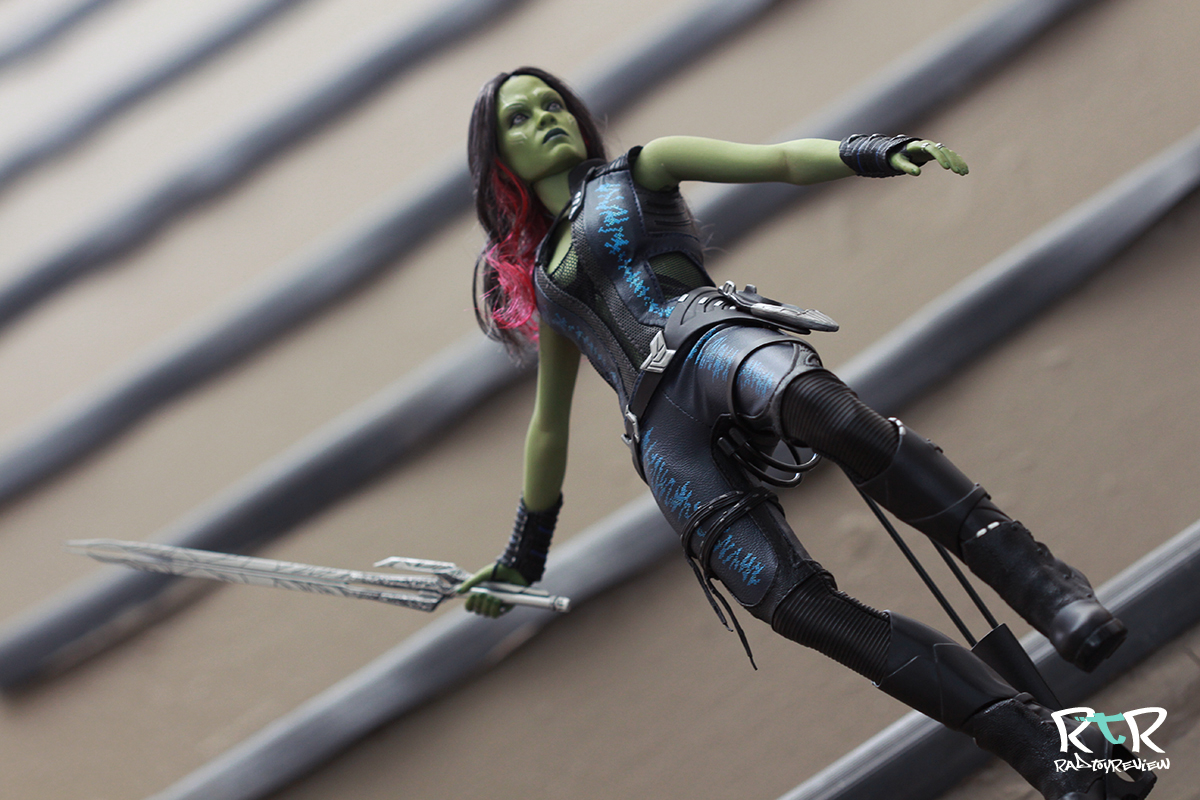 As you can see below, the extras that come with Gamora are pretty slim. 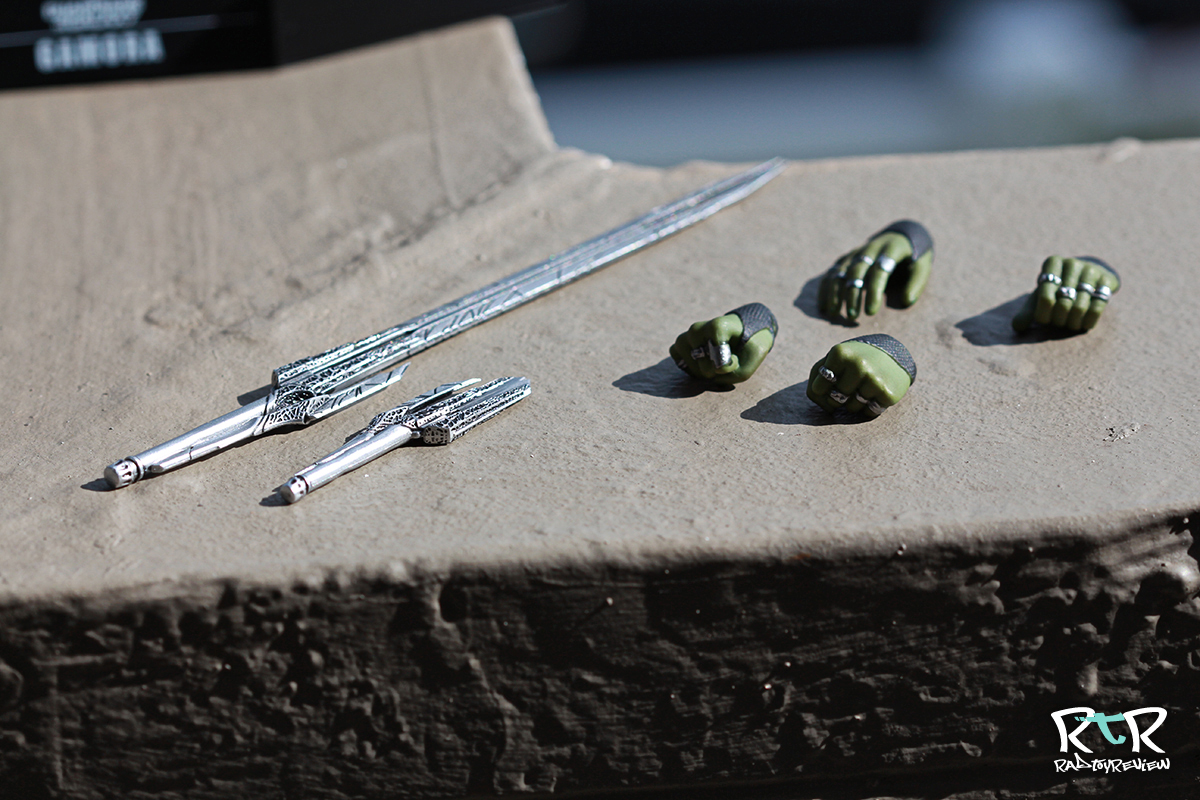 She comes with 3 pairs of hands (clenched fists, relaxed and gripping) a sheathed version of her sword that fits (sorta) on her belt, and an extended version for her to slice and dice with. The hands carry over the nicely detailed, painted rings/fingernails and pop on and off fairly easy. I am happy to see Hot Toys included a spare set of wrist pegs as well, just in case. The sword, as you can see, looks great.. really nice detail and wash throughout. The sword hilt didn’t fit very well onto her hip holster. It sorta sits in there, but it’s not clipped in at all and is very easy to nudge out and onto the floor below.

*Forgot to mention the stand. “She comes with a stand.” Now it’s official. 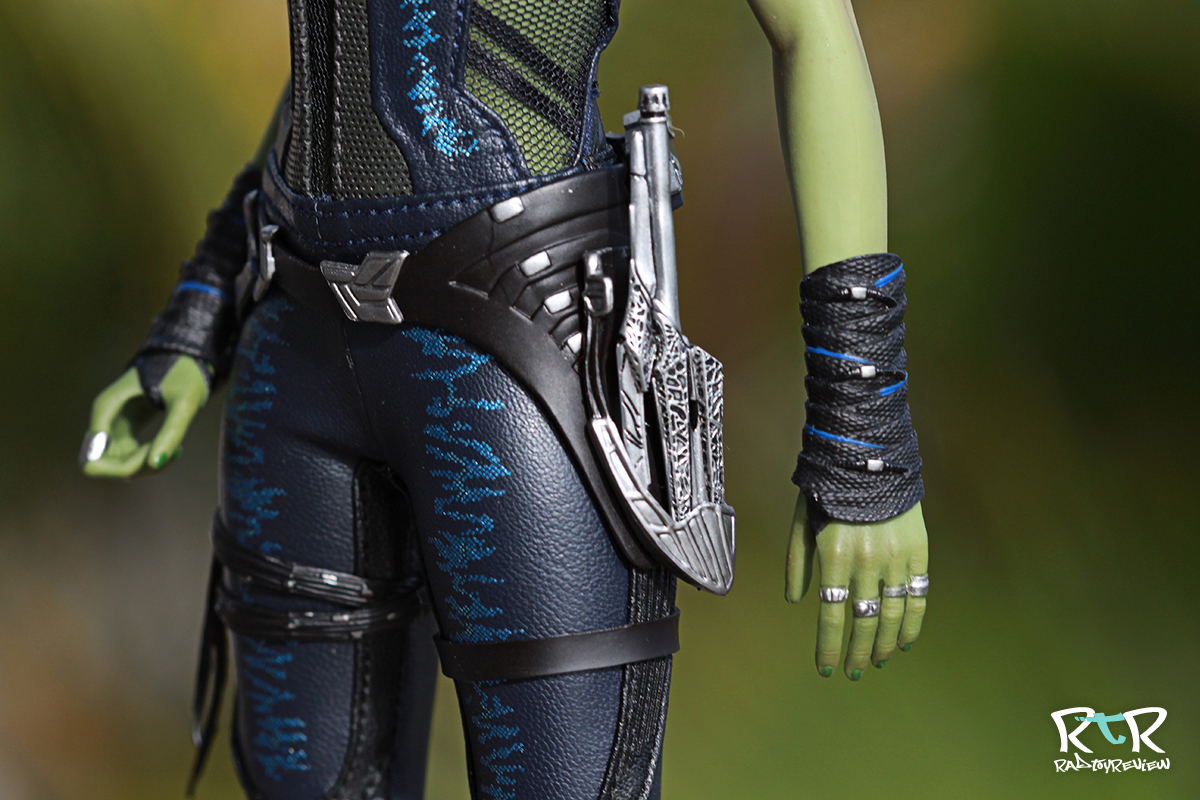 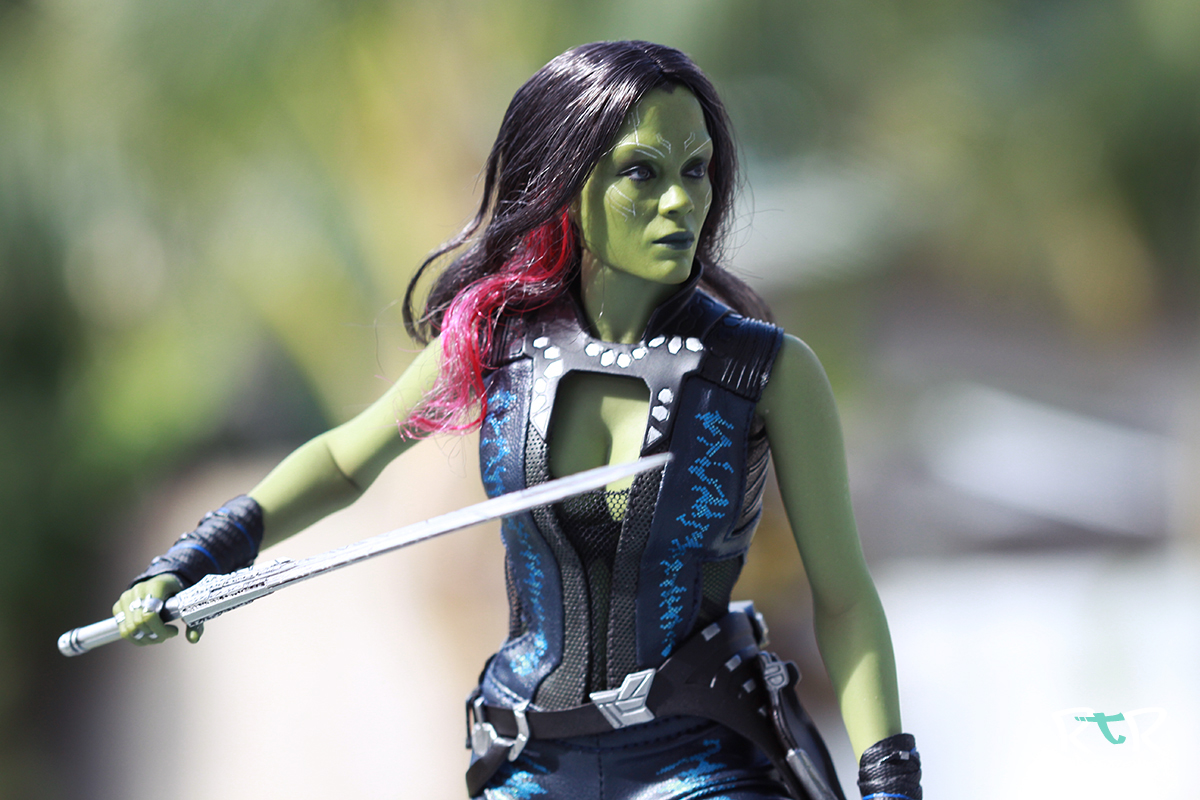 Speaking of posing.. despite her on screen persona, Gamora isn’t all that good at it. When I first saw her at SDCC last year, I thought for sure she’d be super easy to get into some really dynamic, ninja-like poses. When you consider her character, you’d expect it.. but alas, this is Hot Toys. The focus seems to be on making something look “hot” and less on the “toy”… so unfortunately, if that’s what you were looking for, you won’t find it here. 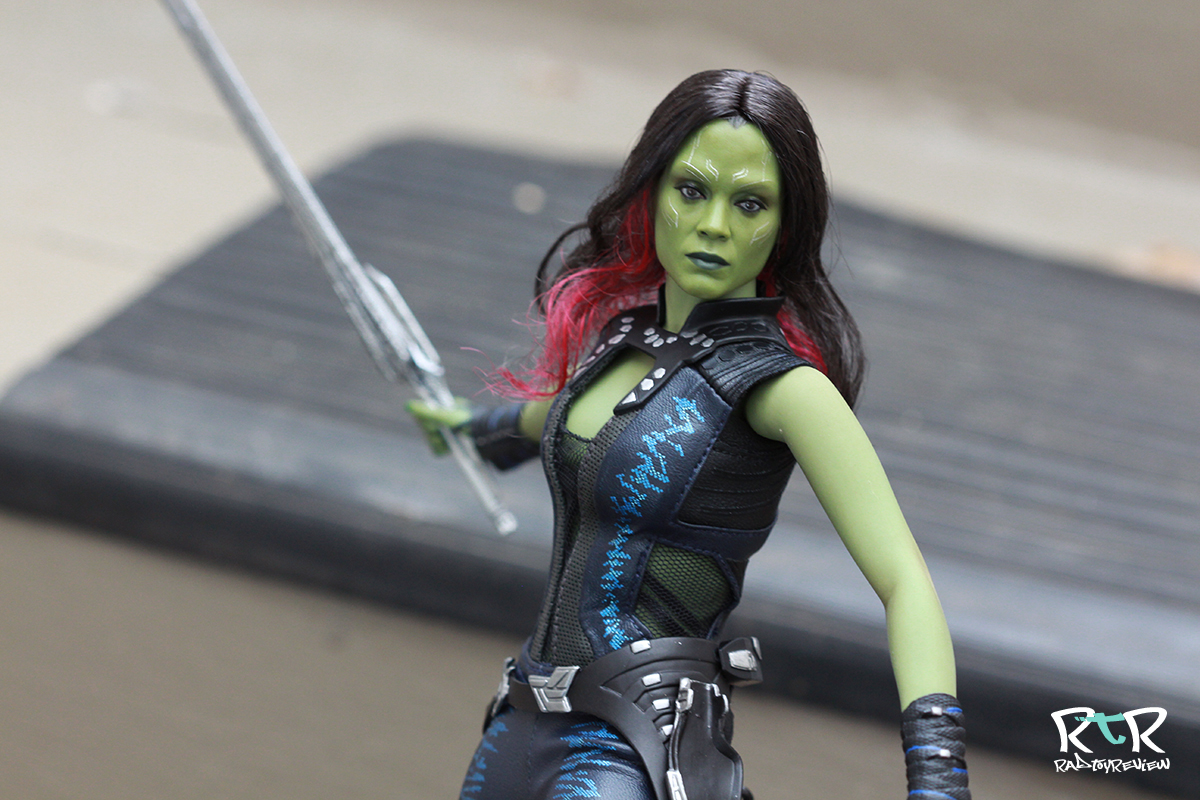 And here’s where we’ll get into the nitty gritty of why Gamora is such a disappointing release. The instructions HT provides clearly warns that you shouldn’t bend her arms more than 90 degrees as doing so could cause long term damage to her skin. I noticed some light pilling near her armpits just from moving her arms up and down. In fact, the moment you start posing her, there’s a heavy tentative vibe in every single thing you do. The skin, clothing, all of it, really… seems as though it could be permanently stretched out, creased or damaged very easily. 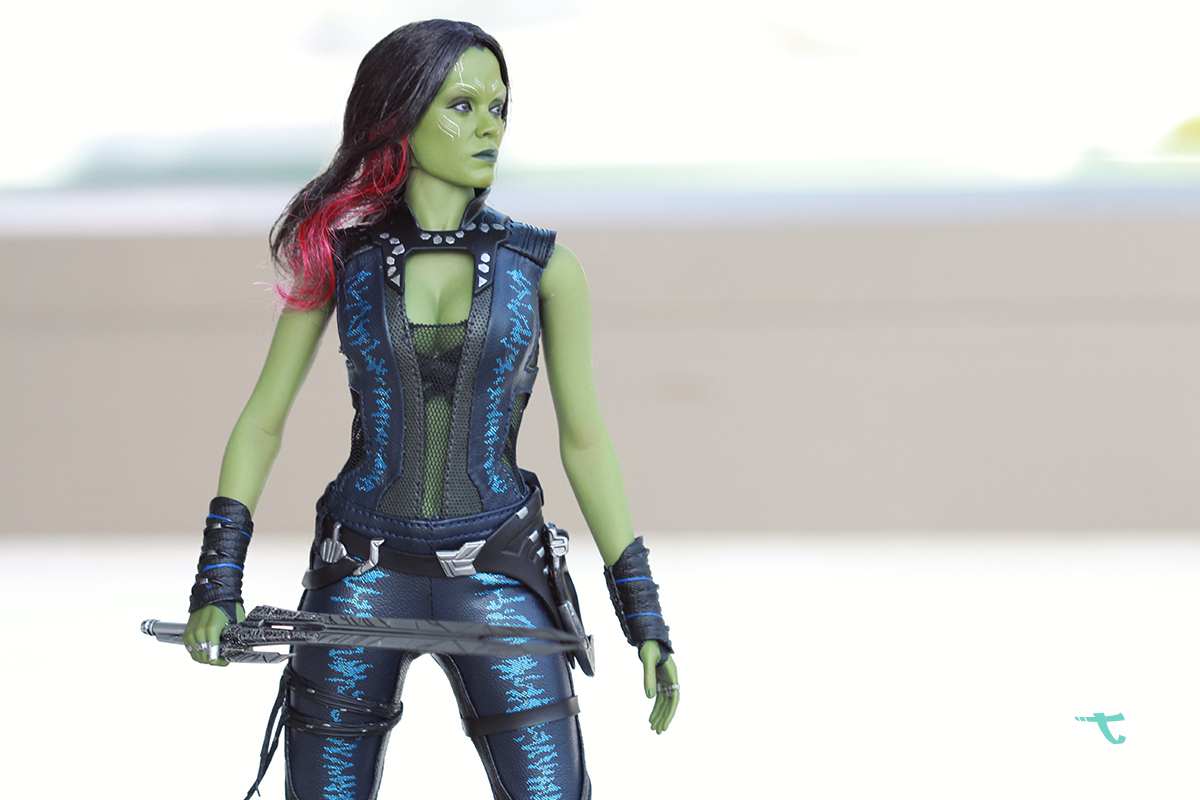 As it turns out, it can.. and it was.
Despite being incredibly careful and only after 20 to 30 minutes worth of light posing while taking the photos for this review today, (seriously, look at the photos, nothing very extreme going on there) the skin of her elbow started to peel off. 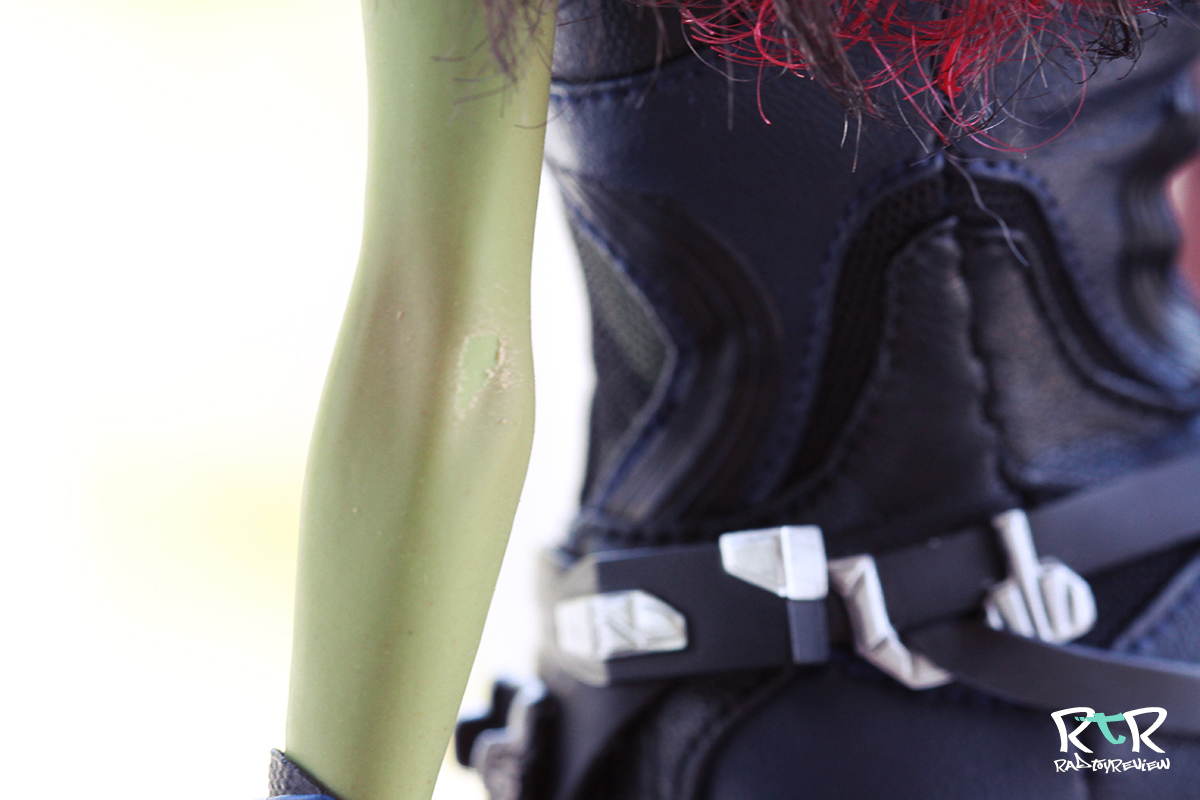 Look, Hot Toys.. I’m going to say this very slowly and keep it simple. If the treatment or finish you’re giving your ARTICULATED action figures, disintegrates and breakdown simply by making the slightest use of the ARTICULATED parts then, ya know, maybe don’t do that. Don’t you guys QC these things? The answer is either you do, and don’t care or you don’t and probably should start.

For the reals though… there’s really no excuse for this. This is a $200 toy. If a $10 toy from Target did the same-thing after playing with it for 20 minutes, it’d get pulled from the shelves and recalled by the company. 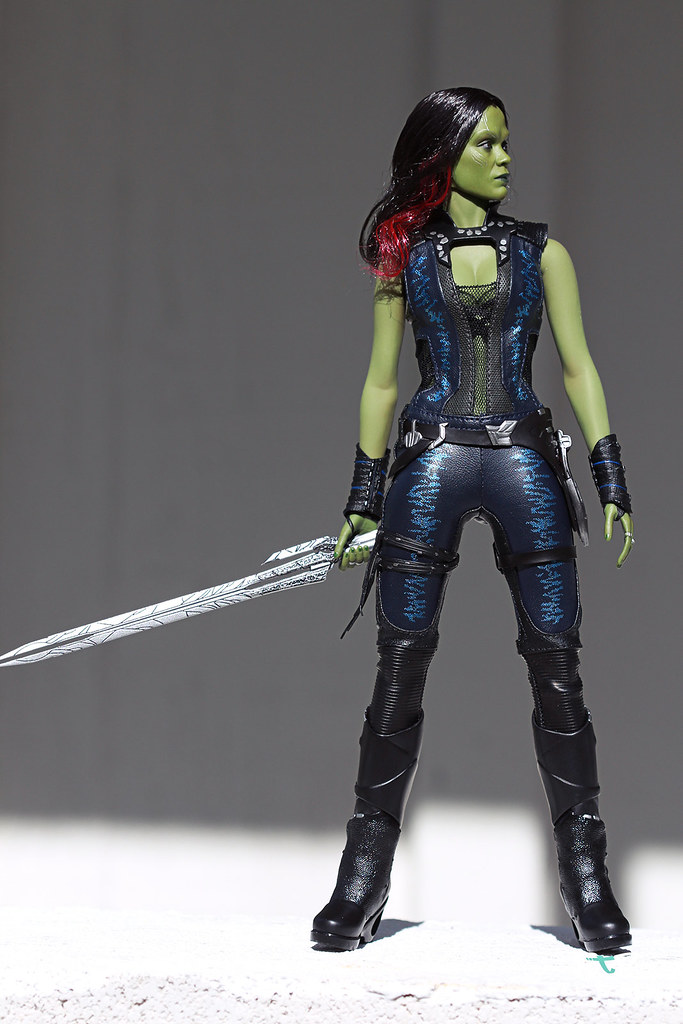 Despite how some of this review may sound, I am slowly coming over to appreciating Hot Toys figures for what they really are.. fantastically detailed, realistically sculpted, incredibly appointed “action figures” that despite sitting on top a very advanced articulated action figure body, you’re meant to display like statues. The strength of them all but solely relies on how gorgeous they are to behold on display.

You’re meant to just focus on the pretty. 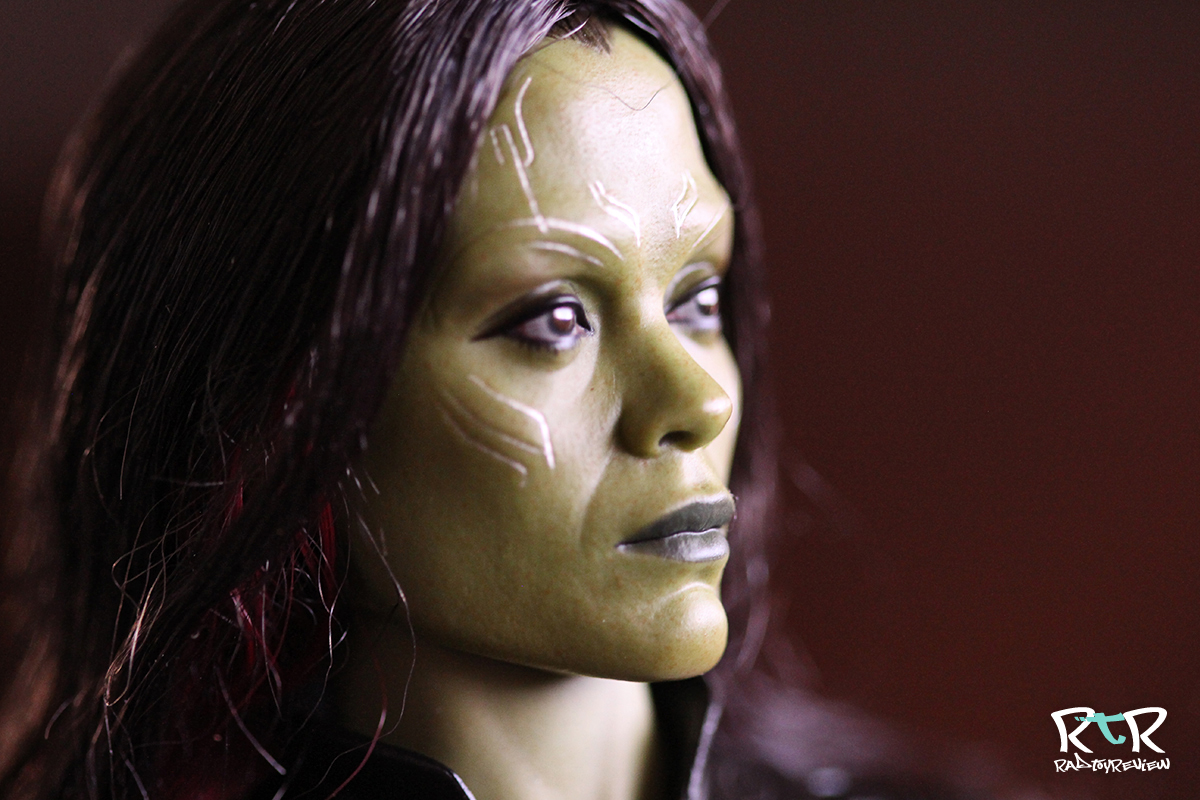 Blank stare or not, Gamora is gorgeous. She’ll look fantastic on my Guardians of the Galaxy dedicated shelf (with awesome Mondo print in the background) standing next to Starlord, Rocket and Groot (sorry Drax).

Or rather, she would look fantastic on my shelf if I wasn’t going to try and return her at my earliest convenience (sorry Sideshow). 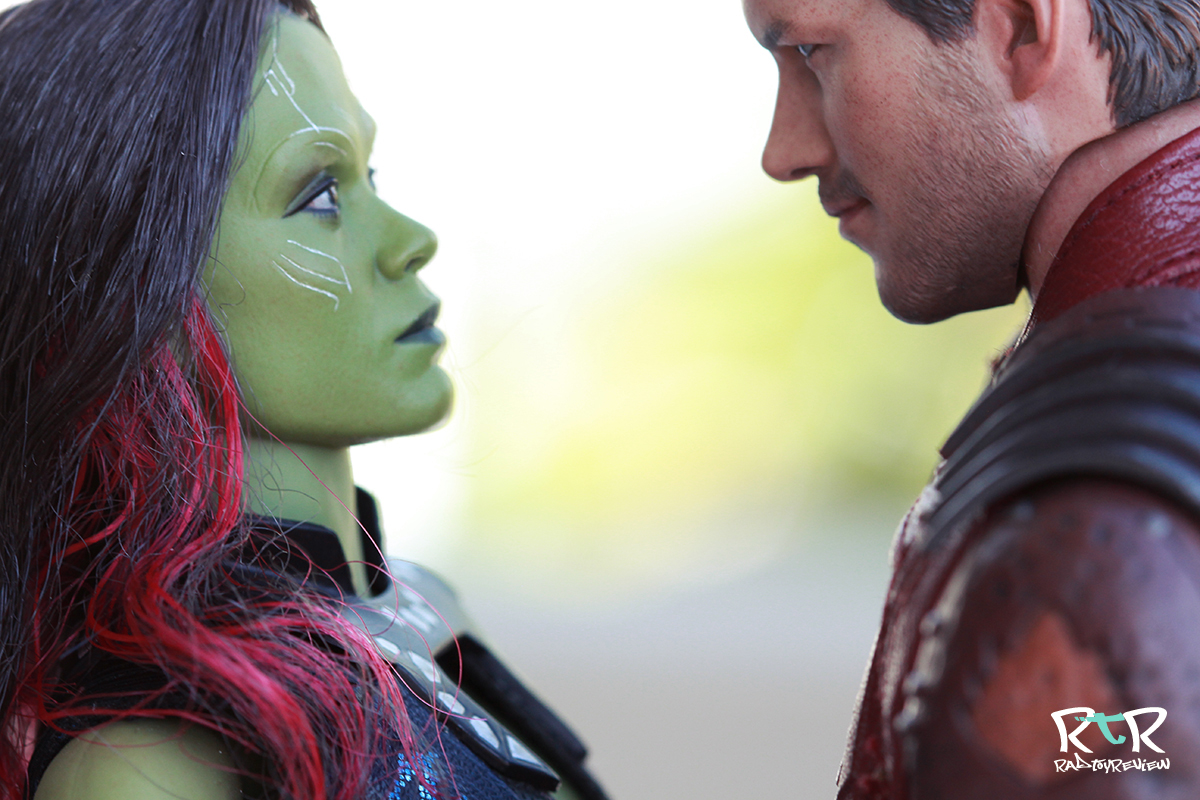 It’s a real shame that I can’t recommend Gamora to anyone, let alone spend full retail on her. Some collectors might not mind the fact that this figure will start to wear out almost immediately when bending her arms, even the slightest.  Some collectors are cool with putting their toys on stands, un-posed and displayed practically like they were when laying in the box they came in…

I’m just not one of those collectors. 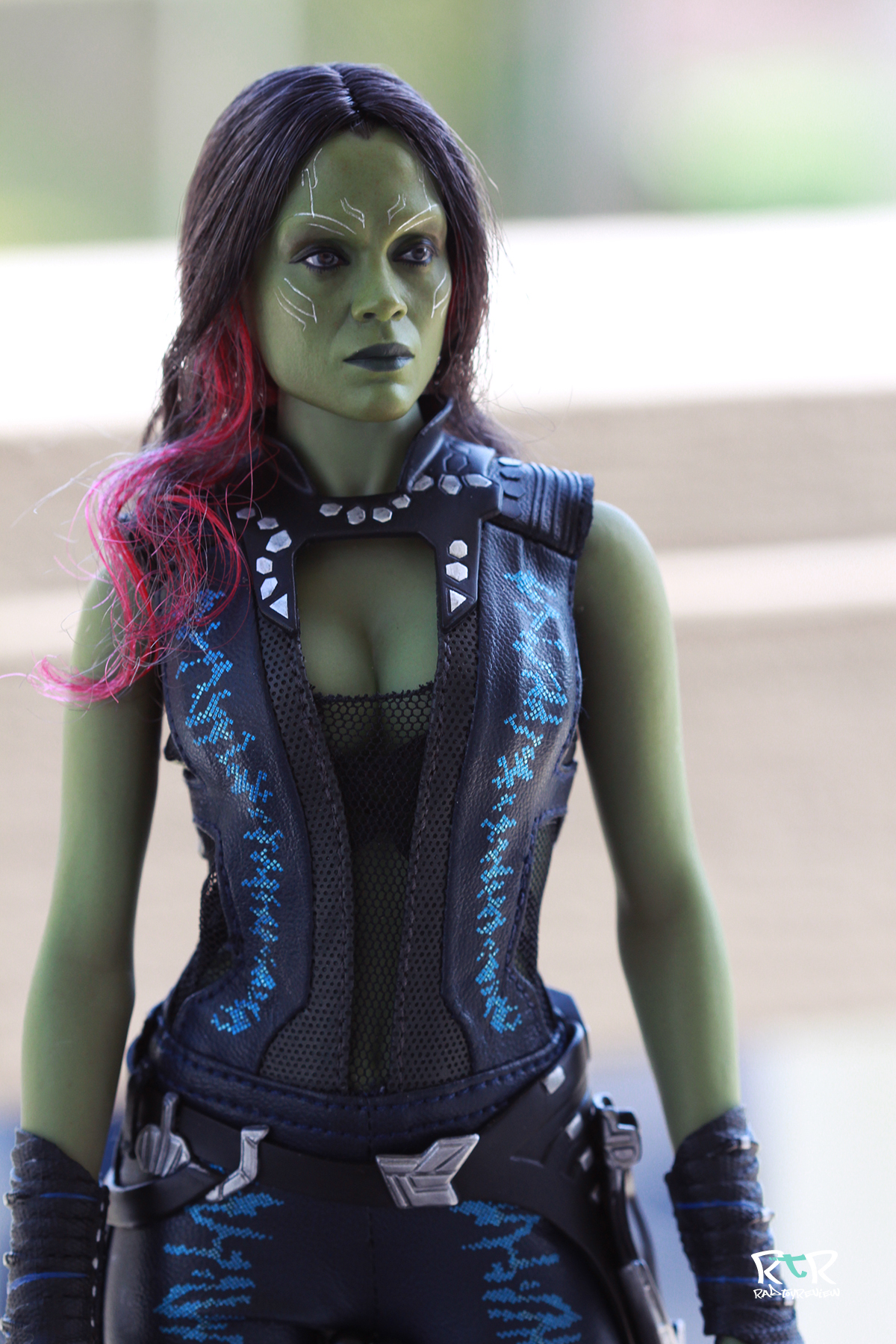 Gamora’s beauty is only skin deep… and that skin is peeling off. 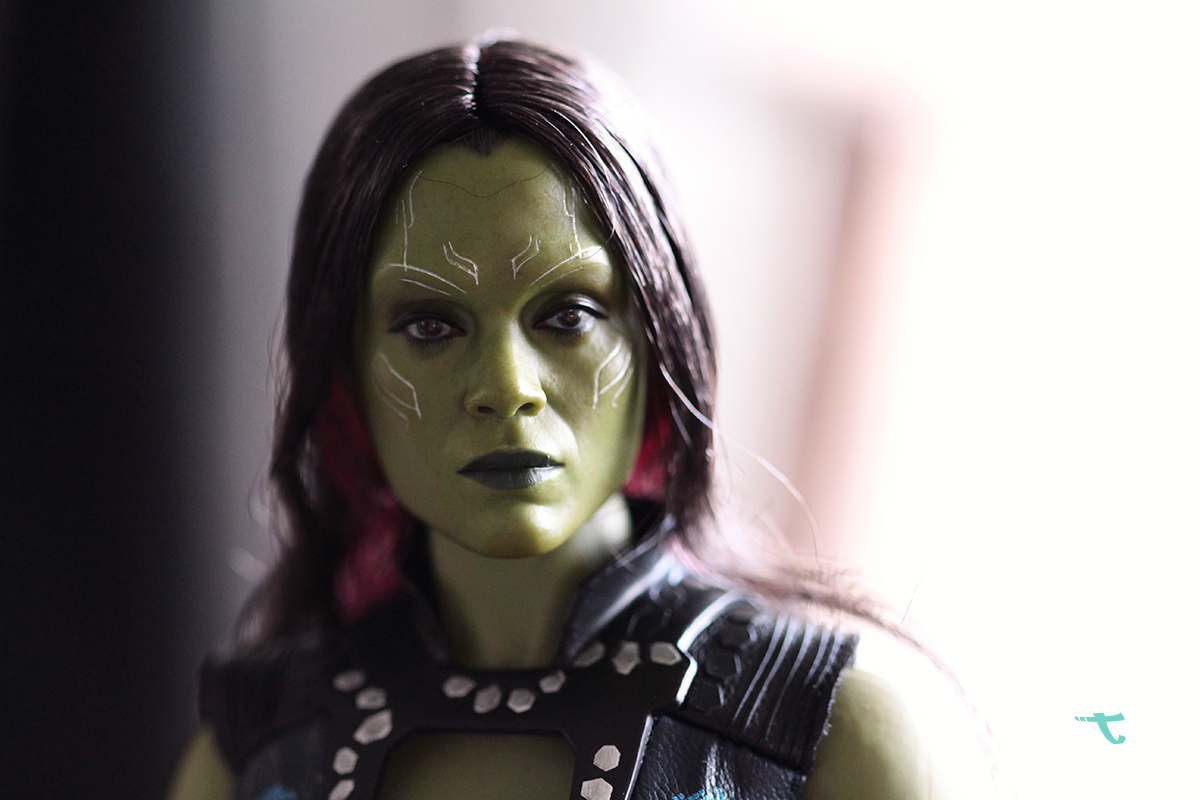 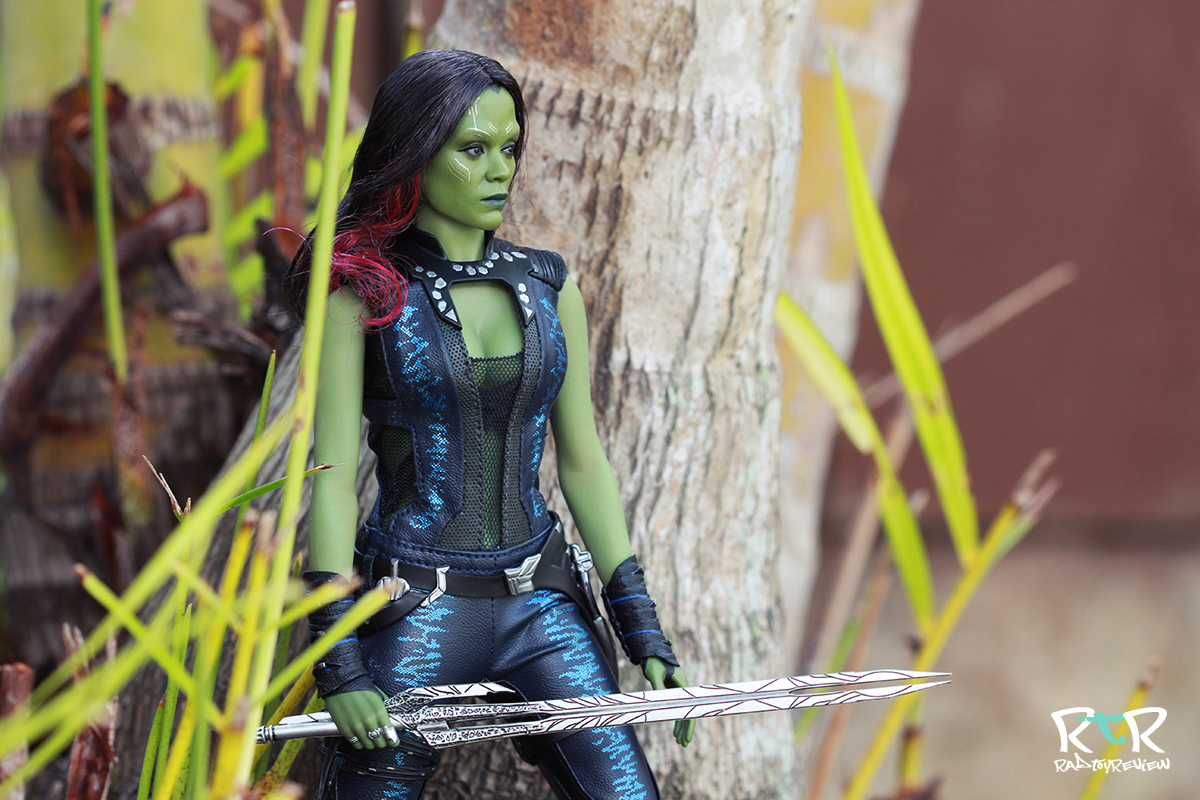 As always, thanks for dropping by and for your continued support of Rad Toy Review! The kind words and emails I get from you all make it worth the effort. If you’re interested in submitting a toy for review, please contact us at radtoyreview@gmail.com