We love Metal Gear. LOVE it. We also love toys. Lo-and-behold, Square Enix/Play Arts Kai, one of the coolest toy manufacturers out there, has combined the deuce and created one of the most successful toy lines in their mighty arsenal.
Today’s figure has been around for awhile, but we’ve just now been able to spend the appropriate time due this self-degrading Cyborg Ninja. We’ve been big fans of just about everything Play Arts Kai has put out recently. Will Grey Fox make a killing or disappear into the cloud of smoke that is action figure mediocrity?

Did you never learn to read? Don’t enjoy viewing all the pretty pictures we put so much time into photographing? Would you rather watch compressed, grainy streaming video? Then you should check out our brief video review!

Cyborg comes in the same sort of box all Play Arts Kai figures are packed into. A big plastic window gives you a clear view of the prize waiting inside. Metal Gear’s 25th anniversary logo adorns the bottom corner to remind us all how old we are. On the back there are a few photos of Cyborg posed to tease you with a bit of his sexy-self. A thimble of apologies for the empty box photo. We didn’t dally long enough to get any sort of unboxing images when we got Grey Fox in hand. We tore that sucker open and got to the good stuff as quick as we could! 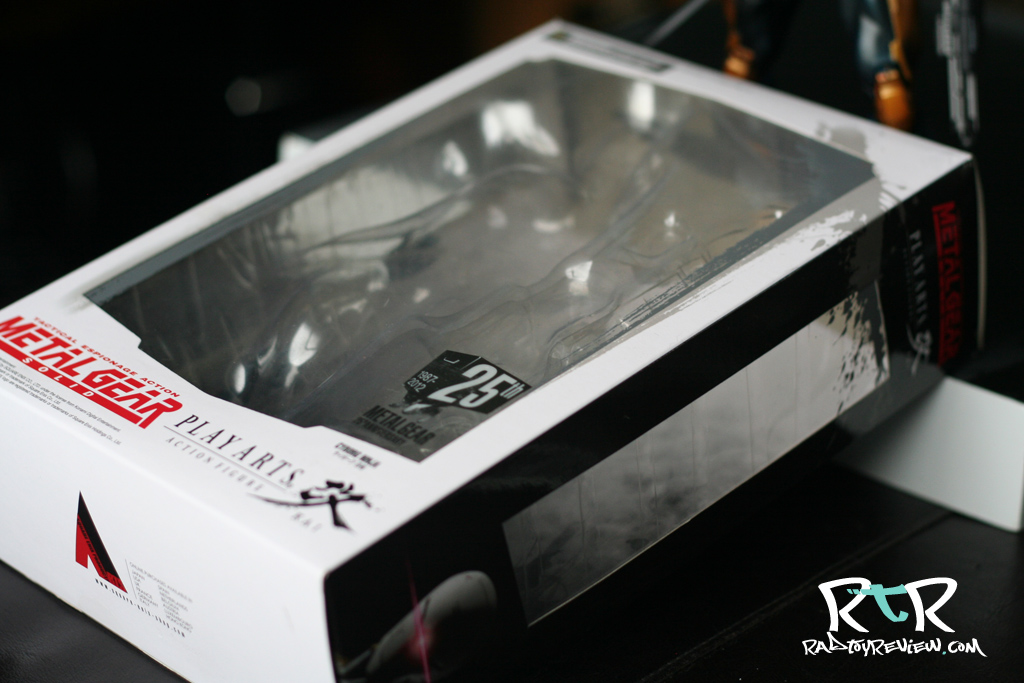 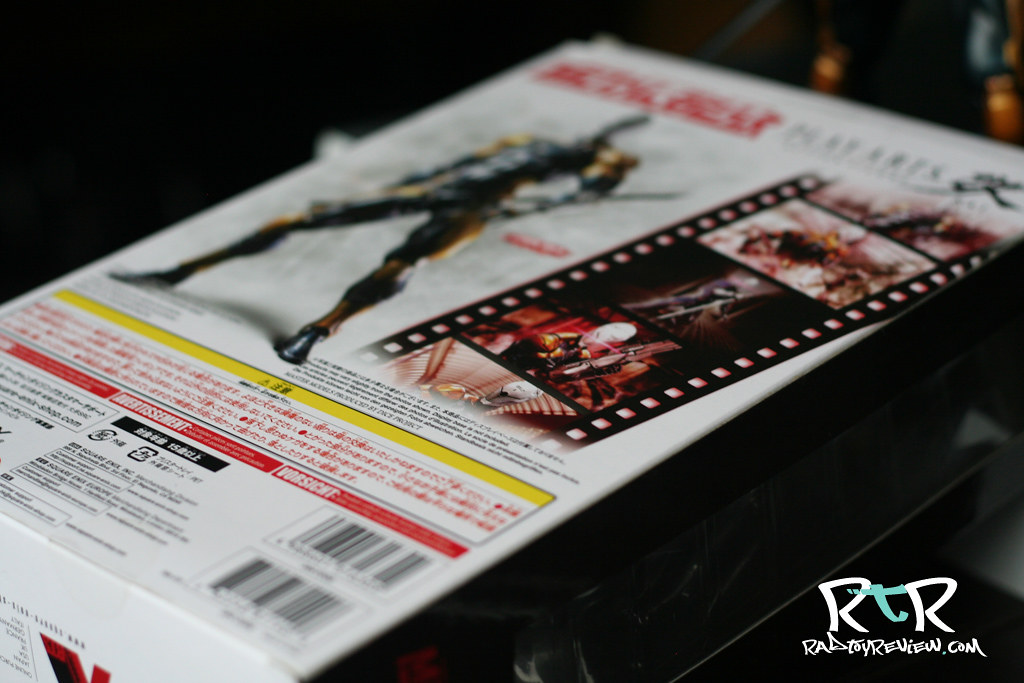 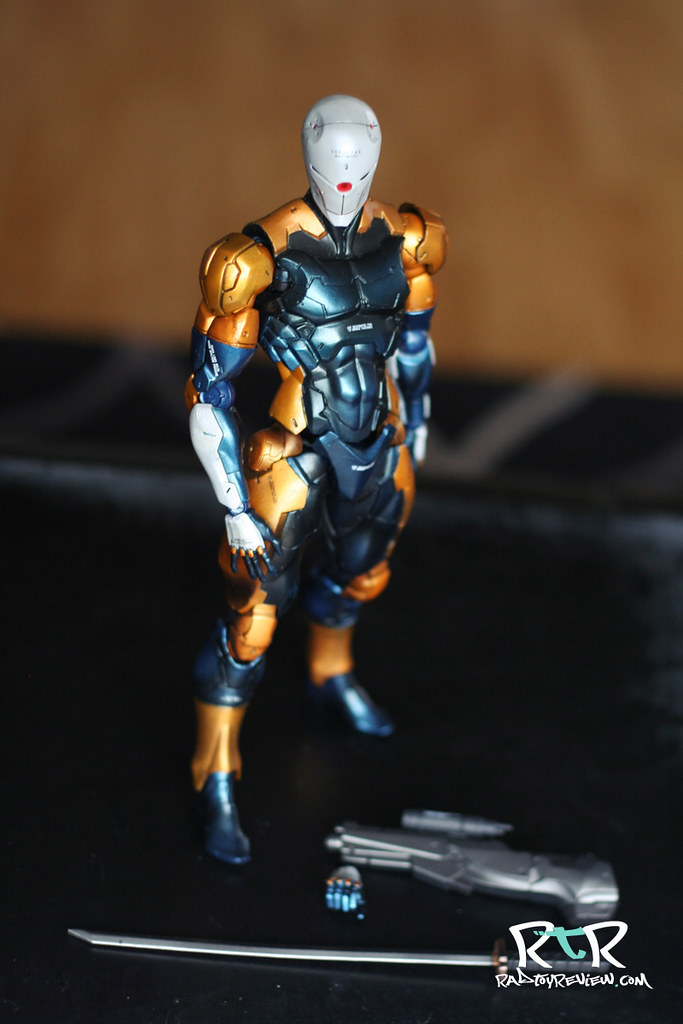 The anguished ninja comes with his trusty ninja sword (a high frequency blade) suitable for slicing and dicing. He has an alternate hand that you have to swap out in order to hold said sword. On top of that he comes with a snap on laser gun arm. One thing of note is that both the hand for holding his sword and the gun arm are intended to be right handed. Apparently Play Arts Kai doesn’t want you to dual wield with your toys. That being said, the laser cannon will fit on either arm if you’re feeling particularly rebellious, you go-against-the-grain-toy-collector you.

The first thing that struck me about Cyborg Ninja, and in fact what I can say is usually the first thing that strikes me about any Play Arts Kai toy, is just how good he looks. The sculpting and details on him are really very nice. If you didn’t know better, you’d swear this little guy was built head to toe of shiny metal and circuits. The fine folks at Squeenix really know their stuff when it comes to modeling character details. 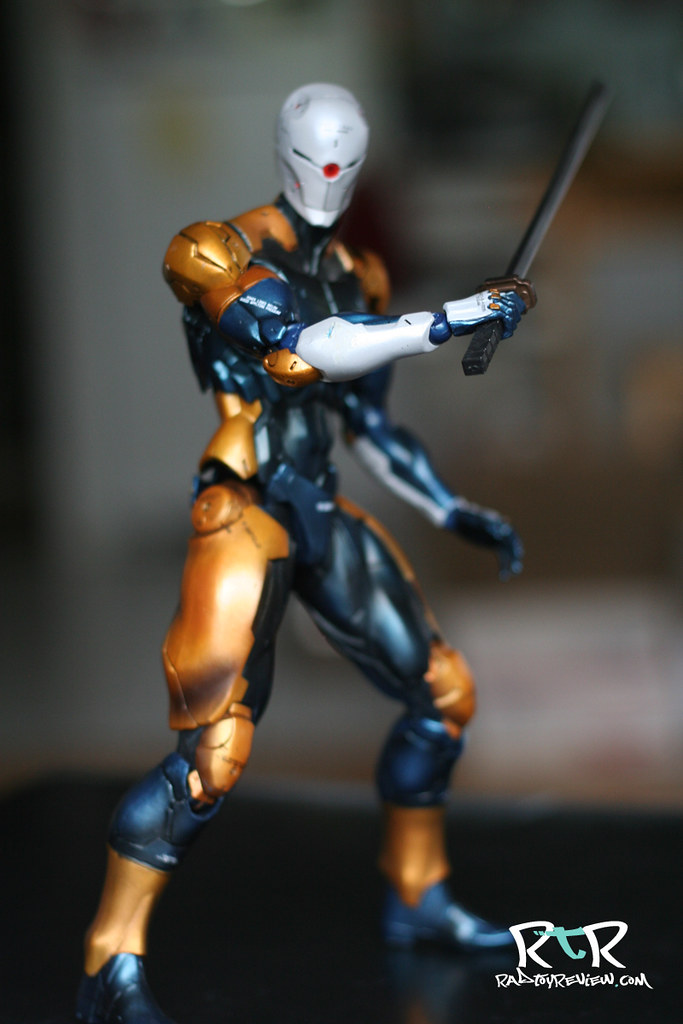 I love the spinal column detail on his back, it’s spot on from the game. I kept thinking how cool it’d be if it was articulated and moved as you twisted his back around. It’s cool in its current form, none the less. 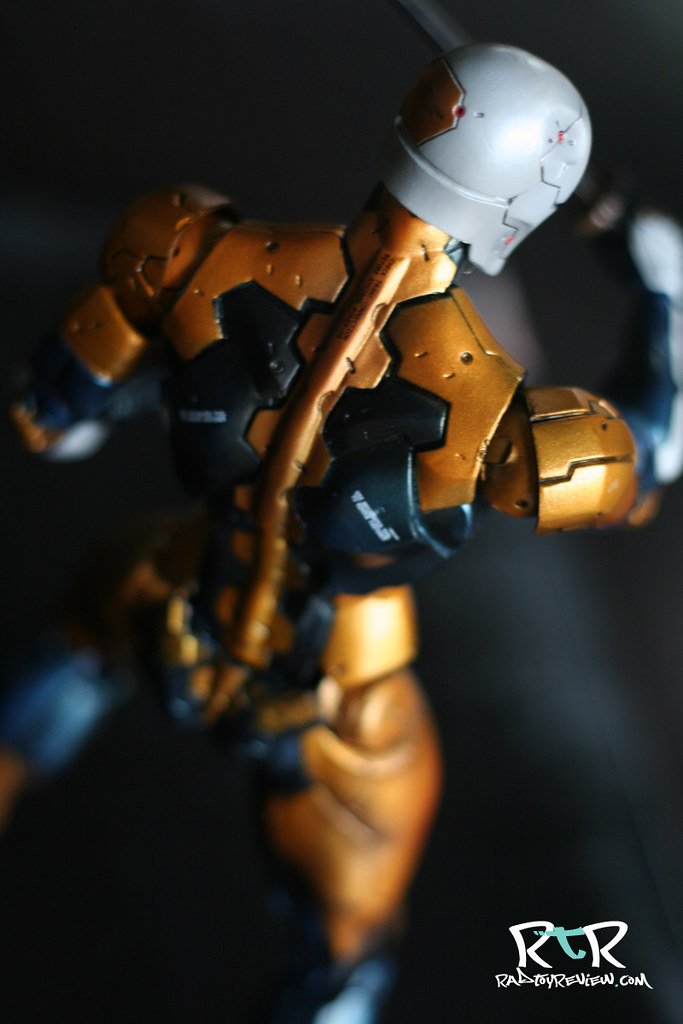 The glossy paint work on Cyborg is basically two tone, lots of gold and blue with a dash of grey. He pulls it off really well. There’s not a lot to complain about paint-wise, as checking him up and down, I didn’t find any bleeds or smudge details, save a few small spots on some seams. I’d say of all my Play Arts Kai figures, Cyborg Ninja has the best paint app and the least flaws. There’s a ton of little decal that really sell the cyborg aspect of him. 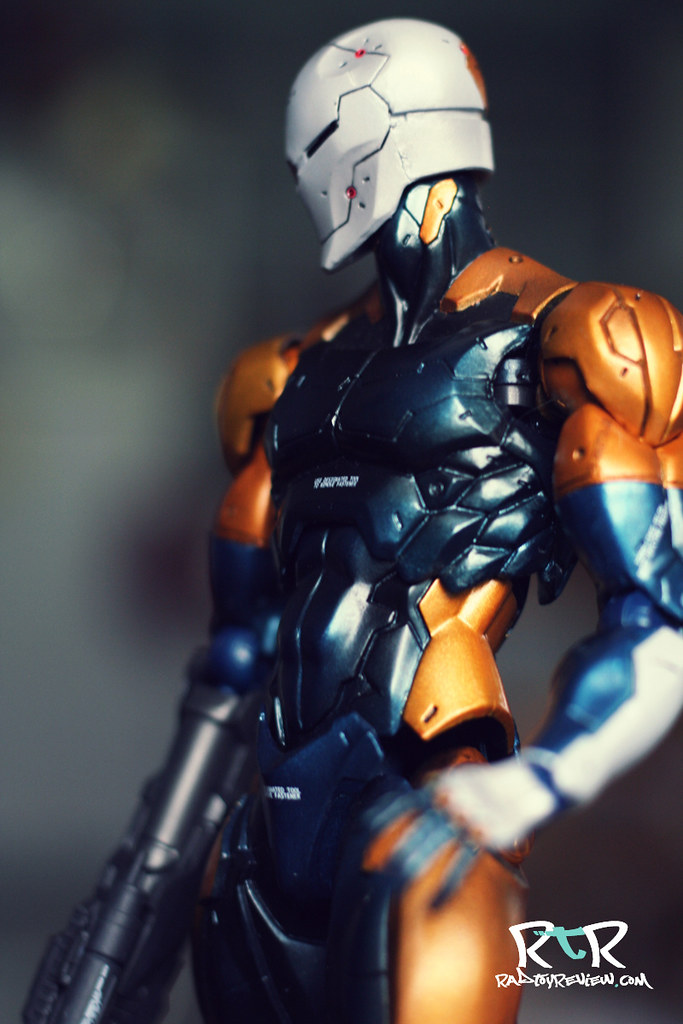 I say “nigh flawless”  because he actually DOES have one fairly significant scar on his spotless hide. On his forearm there’s this odd matte smudge of paint. It’s like someone at the toy factory noticed an unpainted spot on him as he slid by on the conveyor belt, dipped his thumb in some crappy grey paint conveniently laying nearby and smudged over it to cover it up. I didn’t bother photographing it as it’s not showing up very well. In fact, it’s not terribly noticeable unless you know it’s there. It’s just a little odd since it does actually appear that someone went through the trouble of patching a blemish… they just took zero care when they did. 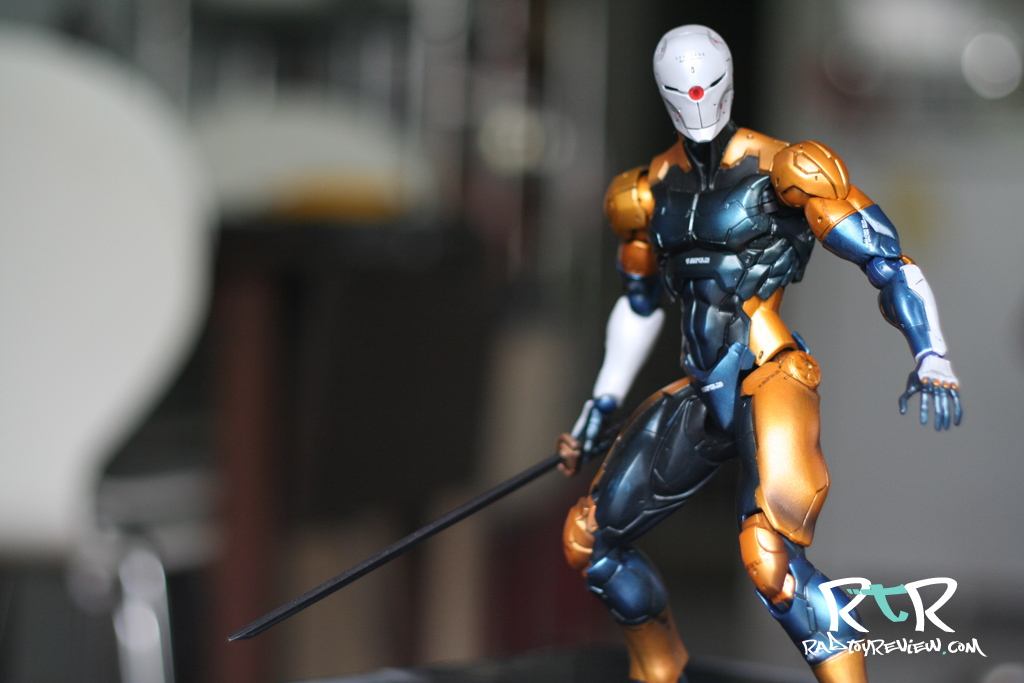 Articulation on Cyborg is what you’ve come to expect with Play Arts Kai figures. There’s quite a bit of it, and most of it works really well for some dramatic and fun poses. It does seem like ol’ robo Ninja has a little less articulation than Snake did, which seems off since he’s a ninja and he should be able to bend and twist as such to kiss the back of his own knee caps if he felt the need. Despite that, I was able to get him in just about any pose I wanted to with only a few exceptions. 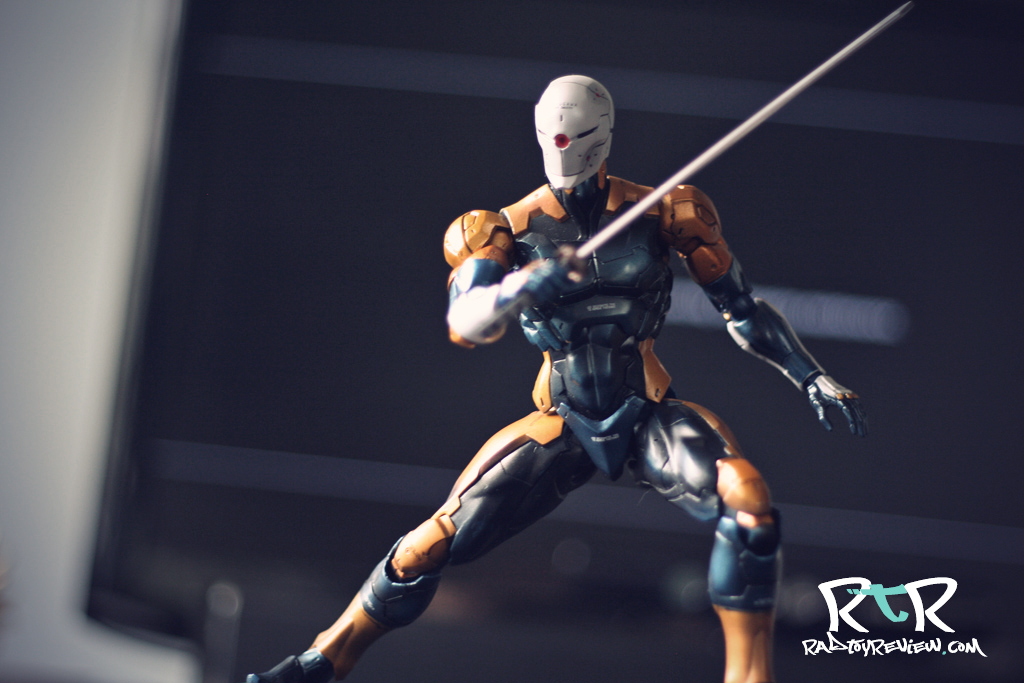 I always feel like I’m relearning something about action figures whenever I start to play with a Play Arts Kai figure. As per the usual, Cyborg is loaded with various points of articulation and much of it is pretty intuitive if you’ve ever played with a toy at any point in your life. However, there’s a few little tucked away hinge and rocker joints you may not catch on your first outing. One of these is located at his shoulders.. pull them in towards his chest and they pop away from his sides. While it gives him a bit more reach than he had before, it’s not super natural looking. One thing it IS good for is that it allows for a certain lonely Ninja to pretend he’s making out with a hot babe.. 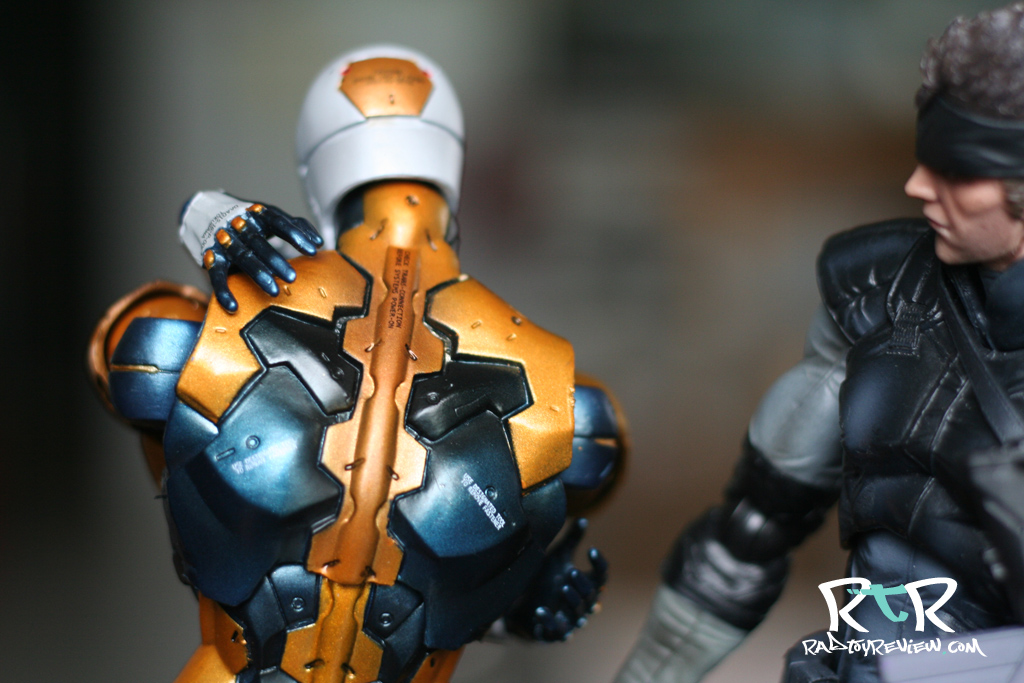 I think Snake’s on to him. 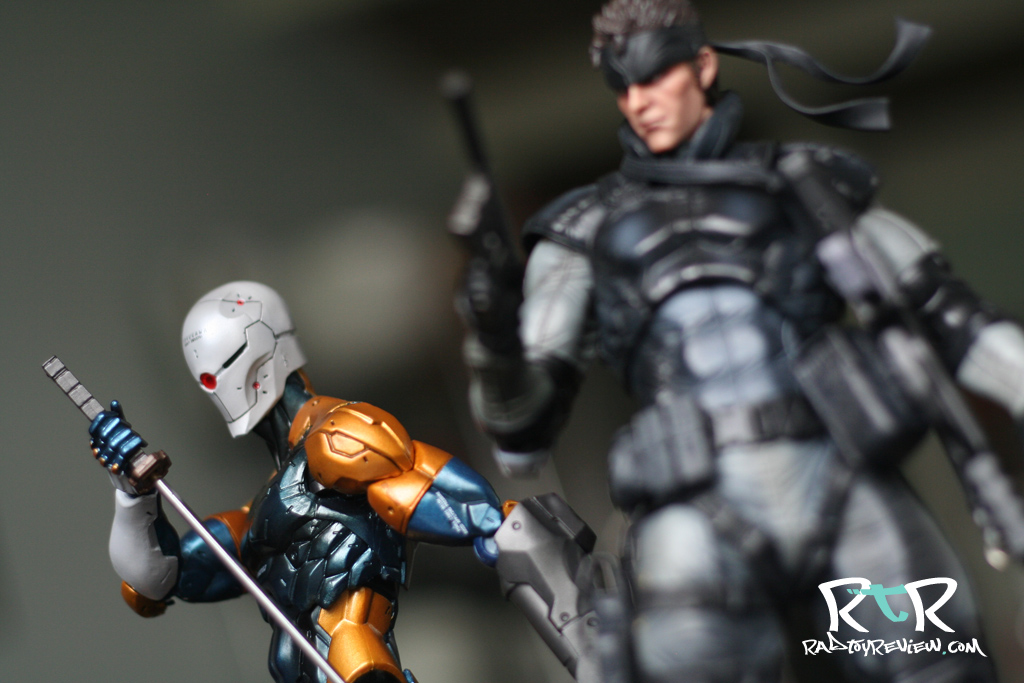 As I mentioned before, the hand that Cyborg holds his sword in is the same arm that you’re supposed to remove when you put on the laser gun arm. Thankfully, you can ignore that if you choose and toss the laser gun arm on his left side, leaving his other arm free to swing a sword around. If the scope of the canon being on the far side from his body doesn’t bother you, I think he looks particularly cool in this setup. 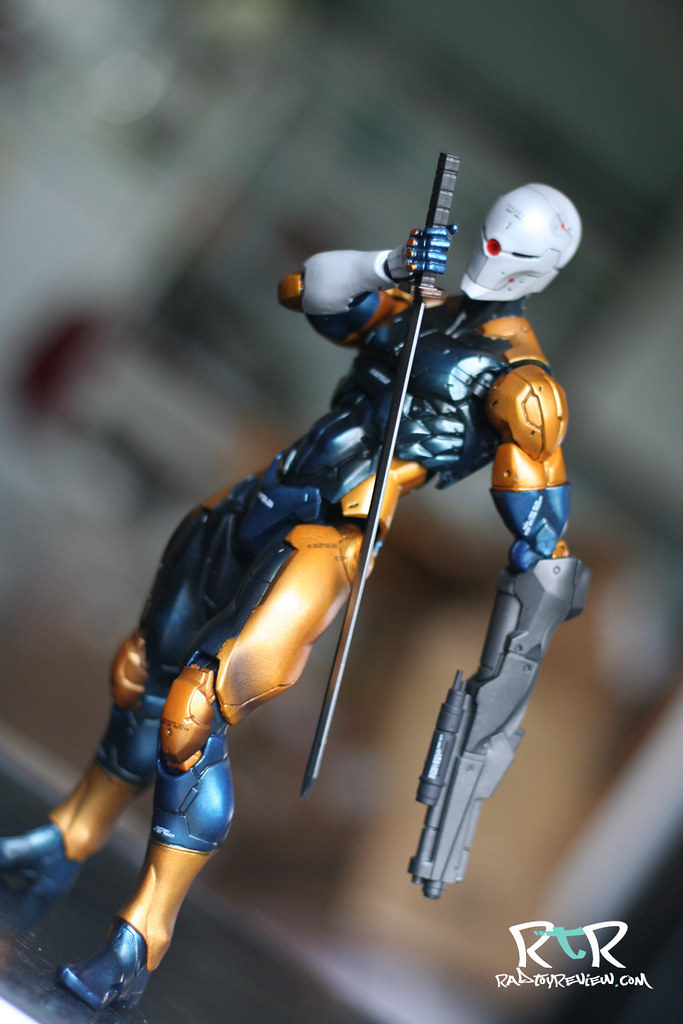 Play Arts Kai figures have always felt solid and well made. They have a heft to them that gives you the impression that the toys are built to last. For the most part that’s true. PAK toys are some of the higher quality figures out there. That being said, a few things continue to bug me about them. One is the articulation system. It’s not that the system itself is bad, it’s actually pretty advanced for this scale of action figures. The problem lies in the fact that most of the joints are held together by simple swivel ball joints which are unreliable in how well they stay in place when posing the figure. It works well in most cases, but on literally every PAK figure I’ve owned there’s been at least one that comes off in your hand the second you try to bend or twist it. With cyborg, I had two spots like that. The first and most noticeable was his right leg, which kept popping off at the hip. It’s incredibly easy to pop back on, but it’s annoying when you realize how well set in place the other leg is. Why couldn’t they both work equally as well and just STAY ON? The second piece is less a joint and really just a part of him that comes off absolutely every time I move his arm, his elbow pad. I imagine I could put a small drop of glue in there to keep it from happening if I wanted, but again, it’s strange to me that I’m having so much trouble with one while the other stays securely in place as you’d expect it to. 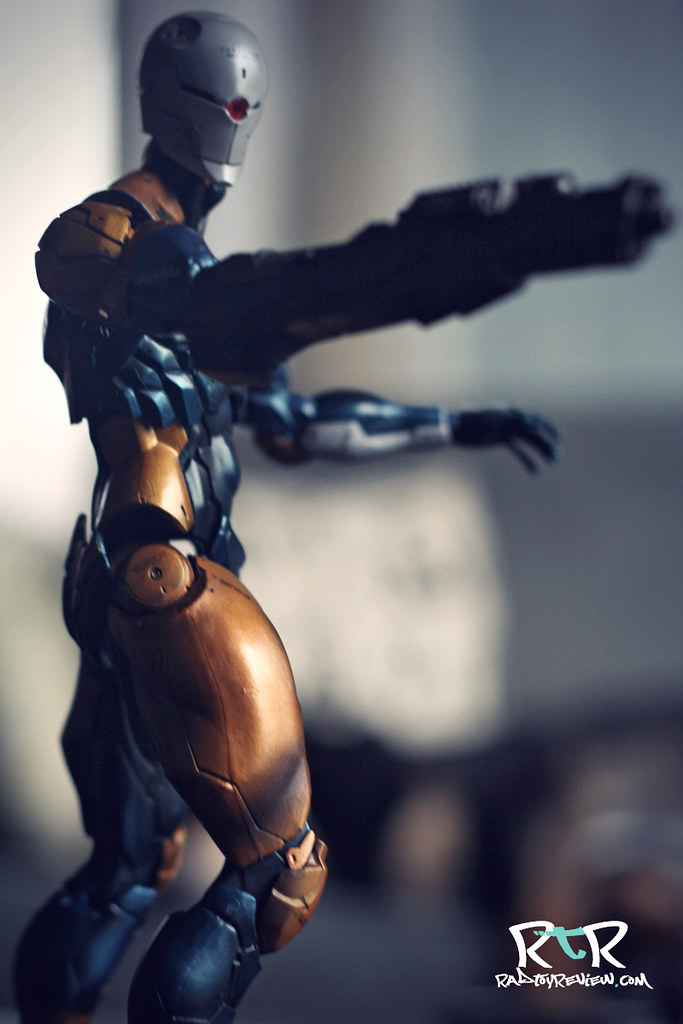 Arms or legs popping out of their joints is probably nothing new to those of you who collect Play Arts Kai figs. It’s a weird QC thing that I’ve heard countless people gripe about  all over the webs.. but I think they’re getting better at remedying at least the more common issues. In most cases, any QC problem you’ll come across will only amount to a small annoyance on an otherwise great figure.

The one thing that bothered me the most, however, wasn’t the randomly self severing limbs, but the tiny skinny baby elf feet Cyborg Ninja is cursed with. 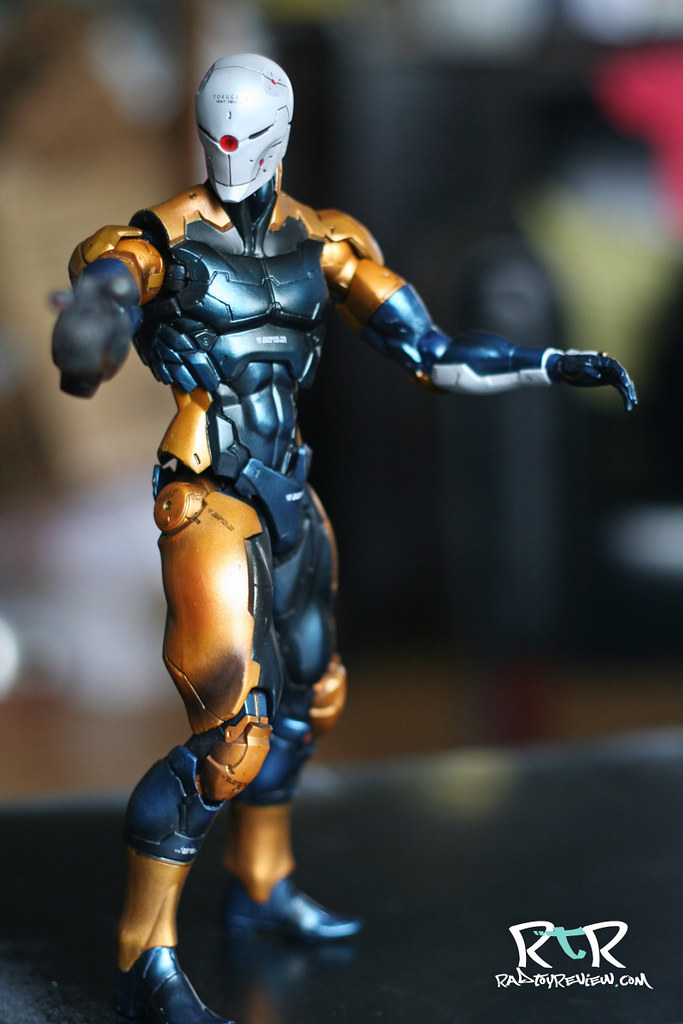 You have to be some sort of toy balancing Jedi to get him to stand up and stay standing. The heft I was speaking about earlier that gives you that “quality” feeling whenever you pick up a Play Arts Kai figure is working against Cyborg in this case. Those little toes are just not meant to hold full grown Ninjas. I can’t tell you how many times I’d get him balanced on a shelf, where he’d sit for 30 minutes.. all the way up to a couple of days, only to have him randomly crash to the floor thanks to a rogue gust of wind. I had a similar problem with PAK’s Arkham Asylum Joker, which frustrated me to no end, until I finally relented and put him on a stand. I’m much happier now.
If you pick him up, I’d recommend either leaning Cyborg against something or getting a figure stand for him as well. You’ll save yourself some unneeded frustration and be much happier if you do. 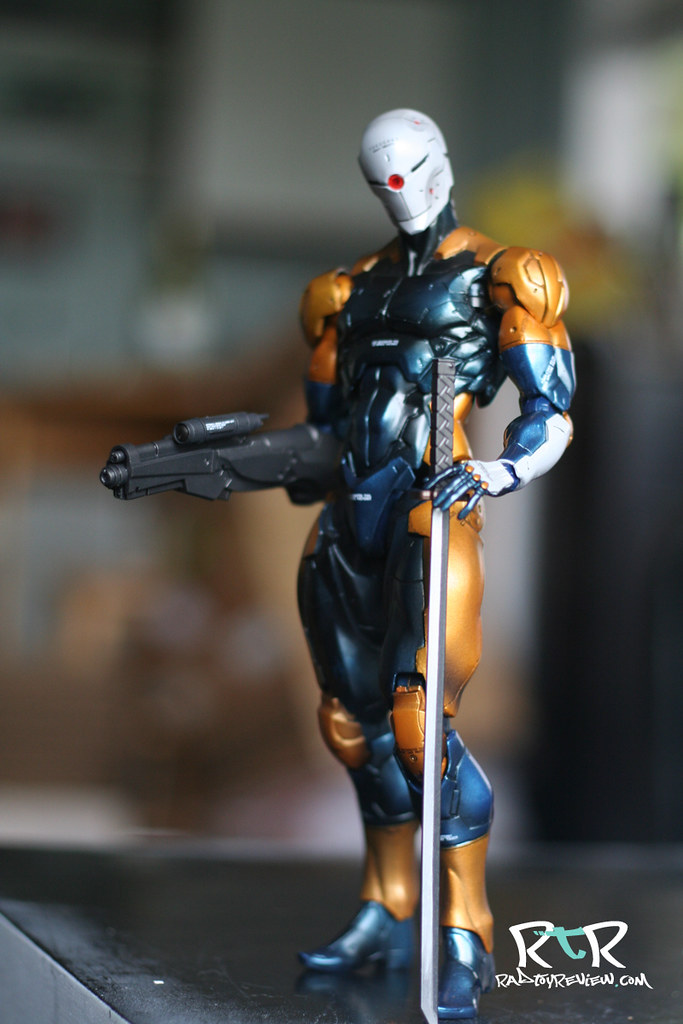 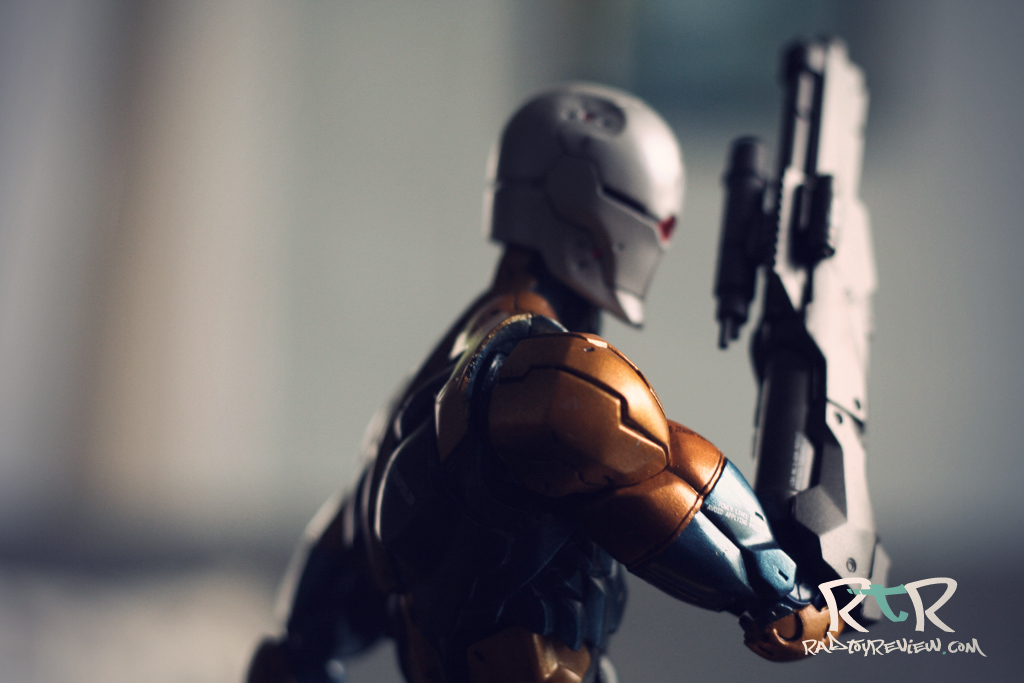 Cyborg Ninja may not take Snake’s place at the top of my Play Arts Kai hill, but he’s still a very solid and awesome figure. If you’re a fan of Play Arts Kai and Metal Gear, then you should have him in your collection. At $60 plus, I wouldn”t give the recommendation lightly. I really do believe you’ll be happy with him chilling on your shelf. 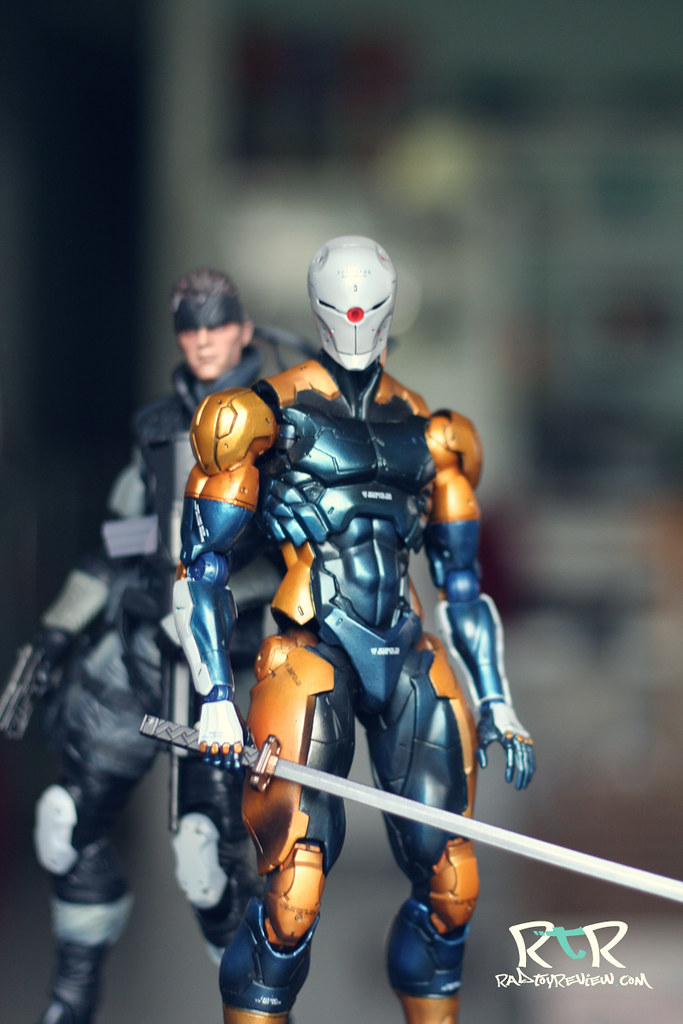 Just remember that occasionally a limb or joint may pop off. At most, it’s a minor annoyance and not a big deal because they should pop back on really easily. Fox’s main demon is his inability to easily stand unassisted.. a truly strange problem for a ninja to have. Go get yourself a figure stand or pose Cyborg in a way that doesn’t require him to balance on the two legs Dr. Clark gave him and you’ll forgo many a stumbling frustration. 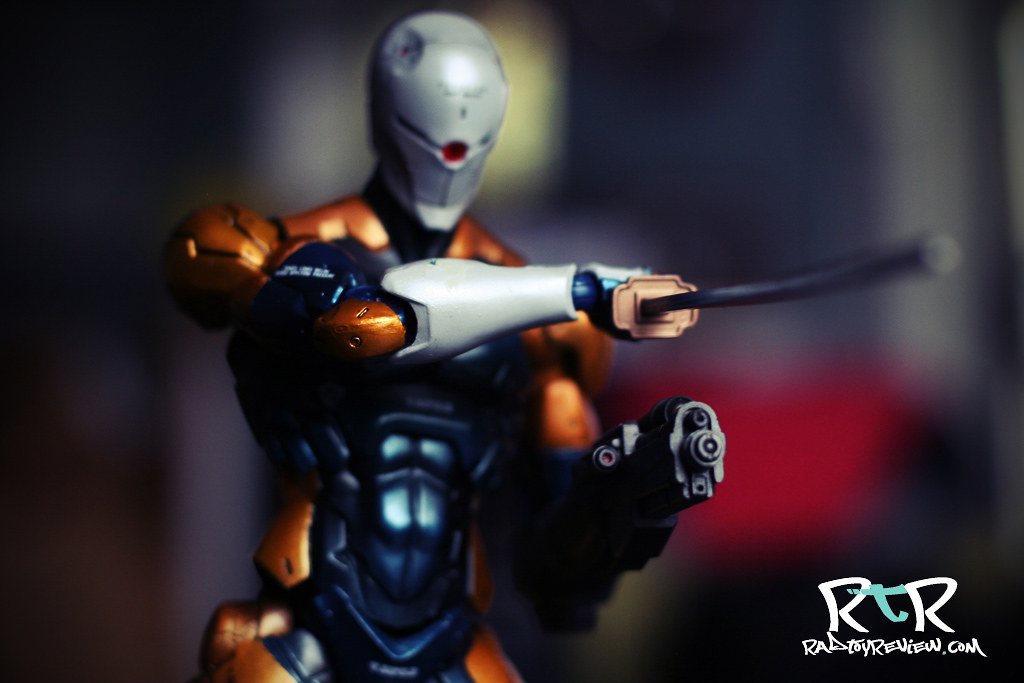 Square Enix Play Arts Kai has released yet another high quality, awesome looking figure. While not cheap by any stretch of the imagination, these guys are less than most collectors’ toys go for and look just as good in many ways. I’m loving this toy line and how Play Arts Kai is handling it. I can’t wait to see which character they roll out next. At the very least, Cyborg has quadrupled my anticipation for when Raiden FINALLY comes out next month. I’ve been anxiously waiting for him to ship since I saw the prototype at SDCC this last year. 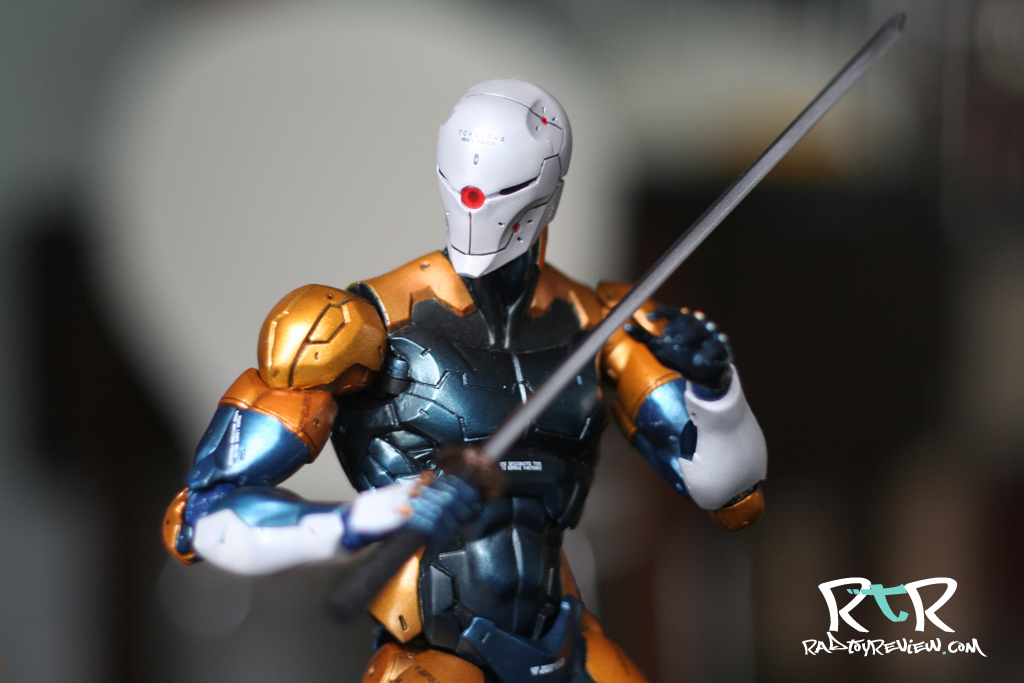 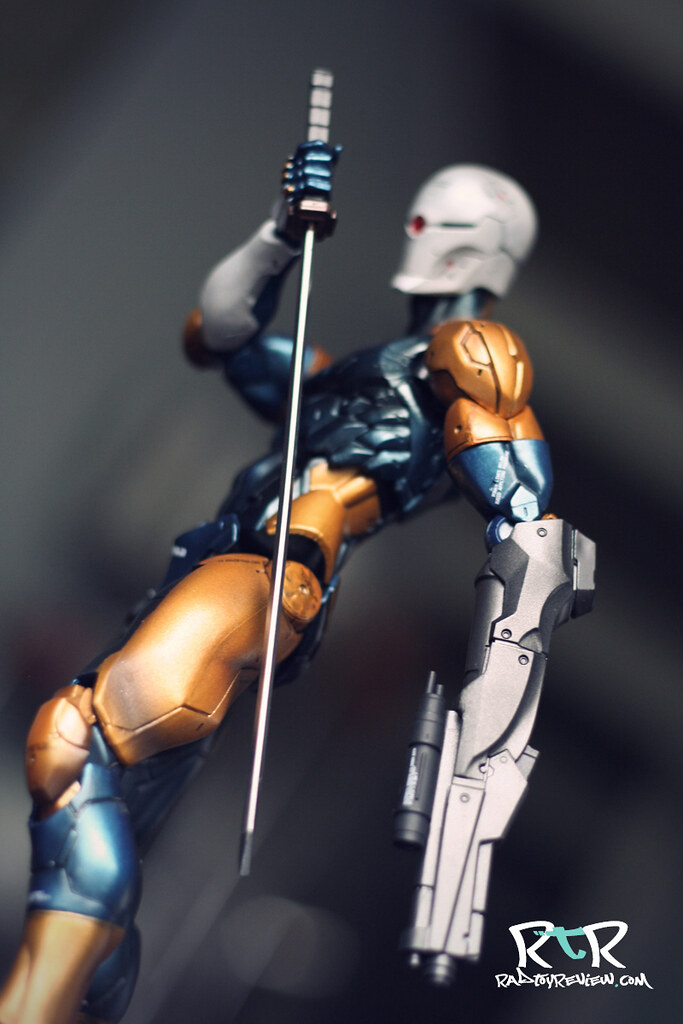